Our review of Shadow of the Colossus, developed by Bluepoint (original by Team Ico/SIE Japan Studio) and released on February 6th, 2018 for Playstation 4. 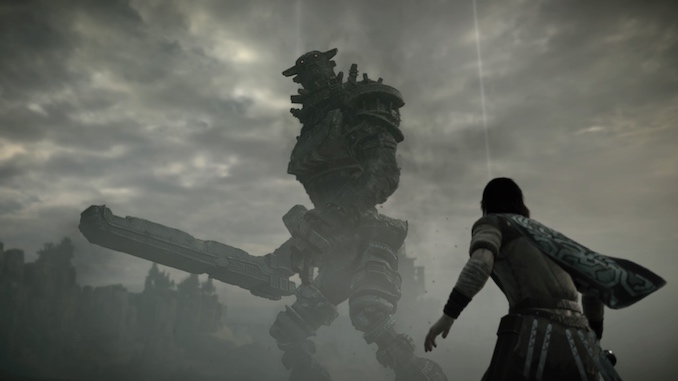 A note-perfect remake of one of the greatest video games of all time.

Although Colossus is a must-play, it’s definitely meant for gamers who know their way around a DualShock. That said, it’s a great game for spectators, who will also enjoy helping to solve its many difficult puzzles. 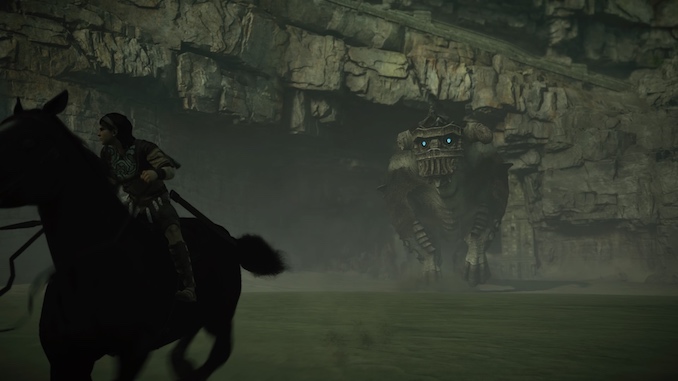 Shadow of the Colossus is a masterpiece.

That was true at its original PS2 release in 2005, and again when it received an HD makeover on PS3. It still holds true today, with this week’s release of a built-from-the-ground-up remake for PS4. Even if you’ve played Colossus before, it might be time for a second (or third) look: sporting a graphical overhaul and some helpful gameplay tweaks, this is the definitive version of quite possibly the greatest video game ever made.

Revisiting Colossus some thirteen years later, I’m struck again by its astonishing scope, its sophisticated narrative, its beauty. The imprint of gaming auteur Fumito Ueda – responsible for PS2’s ICO and PS4’s The Last Guardian (which I reviewed here) – is all over this game. It is, in many ways, his magnum opus.

Let’s start with the story, or at least those elements that can be discussed without spoiling anything. In fact, even the way the story is presented is an essential part of the experience. In an elegant bit of literary craftsmanship, the protagonist, named Wander, is just as ignorant about what’s going on as the player controlling him. All that matters, both for player and avatar, is that you have arrived in a land of crumbling ruins with a dead girl in your arms. Placing your faith in a mysterious god-like entity called Dormin, you agree to a deal: if you hunt down and slay sixteen mythical giants, Dormin will restore the girl to life. 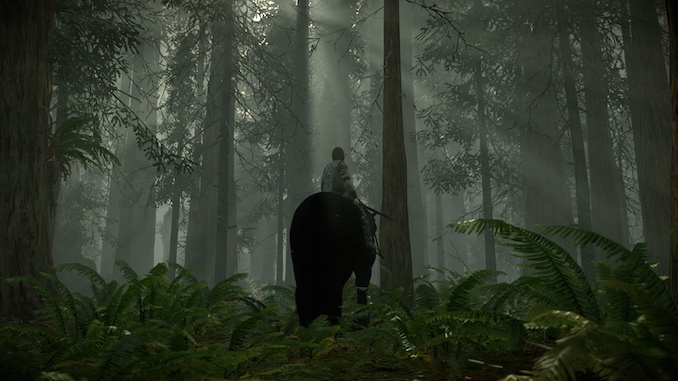 Much has been made of the fact that each colossus is a boss fight unto itself. An epic confrontation with some of the largest creatures ever rendered in video games, your hero flitting about at their feet, trying not to get crushed. When you do manage to climb onto a colossus, scrambling about its shoulders while the beast furiously tries to shake you off, it looks like nothing so much as a wild animal trying to shake off a particularly bothersome gnat. (Albeit, one equipped with a sword.)

But first you have to get up there, and that’s no easy proposition. It begins with simply finding your quarry, which entails a lengthy journey on horseback across a barren but beautiful landscape. Then, when you do spot your next target, a moment of wonder as you take in its grandeur, each colossus remarkably different from the previous (and an absolute shame to spoil, which is why you will find no images of later colossi in this review).

Next – and this comes as a shock to most players – you need to figure out how to even begin your attack. Surprisingly, you spend far more time just puzzling out how to climb onto a colossus, looking for ways to exploit its attacks and its lumbering movements, than you do in actual combat. This creates an unusual dynamic: although combat is, on its face, the more thrilling element, the single most exciting part of every confrontation is that eureka moment of figuring out the required attack strategy. Consulting a walkthrough would be a major mistake.

Reading too much of anything about Colossus risks spoiling the experience, in a way that’s atypical for even the biggest story-driven game. It’s akin to consulting the Coles Notes for a great novel, something like Faulkner’s The Sound and the Fury, which rewards diligent readers by gradually revealing its (often unanticipated) secrets. Every reader of Faulkner will experience a moment when something clicks in their brain, unlocking the novel’s enigmatic prose and casting earlier chapters in a new light.

Colossus also rewires the player’s brain in this way, although the given moment of discovery will be different for every player. It’s a true testament to its legacy that, even today, no video game has ever quite matched Ueda’s inventive and subversive storytelling. (Some other games have come close, Papers, Please being a prime example.) 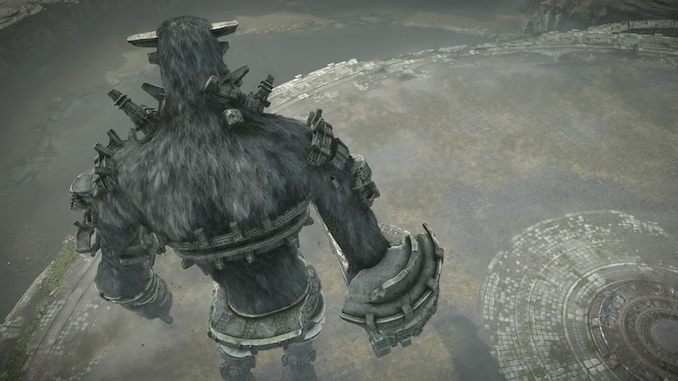 Ueda’s singular realisation, unlike any other developer before (and very few since) is that gamers expect to play by a certain set of rules. We have been conditioned, across four decades of narrative gaming, to approach every experience the same way: pick up a controller, receive an objective, and carry out that objective. Fundamentally, it’s the Super Mario playbook: run forward, fight some enemies, then occasionally confront a larger “boss” enemy at the end of a level. Shadow of the Colossus omits the smaller enemies, but otherwise pushes you relentlessly forward, towards sixteen confrontations with creatures that conveniently look a lot like the traditional video game boss.

But – and, I stress, this is a major spoiler and not to be read until you’ve experienced it yourself – the colossi are not bosses. Not really. They didn’t kidnap any princesses. They never destroyed any villages. There’s nothing to suggest they even want to hurt you. They are wild beasts. Solitary, content, and free. Until you cruelly come along and decide it’s time to start murdering them.

You are, in fact, the bad guy.

The game suggests this in countless subtle ways, but leaves it to the player to figure out on their own. There’s the very fact that you so readily accept a hunting mission from a mysterious and unseen entity; in retrospect, it’s clear that Dormin has offered a devil’s bargain, rather than a god’s benevolence. (Those familiar with the Old Testament will note that Dormin’s name is a pointed warning about towers, giants, and misplaced faith.) Then there’s the fact that every time you slay one of the beasts, it releases black tendrils that pierce Wander’s body and knock him unconscious. What the player knows, but Wander doesn’t, is that every time he falls unconscious, strange shadow creatures begin ominously creeping up on him, dissipating just at the moment when he awakes.

But for most gamers, it’s the dawning realization that every single colossus is just minding its own business until you arrive. Even after you’ve shown up, they’ll usually leave you alone until, villain that you are, you shoot an arrow in their eye or stab your sword into an ankle. Inevitably, players face a stark conclusion: this game world would be better off if you never came along.

This realization changes your perspective on the bloody path you’ve already carved out for yourself, and turns the latter part of the game into an unexpectedly lengthy guilt trip. You still go through with the hunt because the story is great and because the game is fun, but you do so with the full knowledge that your every act is an act of harm. 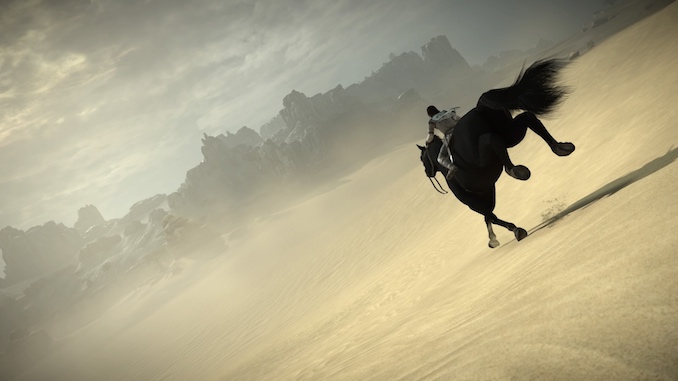 The aftermath of Colossus is usually long hours spent dwelling on the experience, discussing it with others, considering and reconsidering Wander’s epic journey. It practically begs to be played more than once, which is why I won’t be surprised if those who played it on PS2 and PS3 are happy to pick it up again. This is as faithful a remake, of a game not entirely devoid of questions of faith, as I have ever seen.

On the technical side, old and new players alike will be happy with the game’s varied, if minor, improvements. Just as the PS2 version was one of the best-looking of its generation – just check out that fur – the PS4 version is a delight to look at. Agro, your horse and the greatest animal companion in gaming (take that, Epona!) is easier to control, although she’ll still realistically refuse to obey if you push her too hard. There are multiple control layouts to choose from, although I still recommend the classic PS2 scheme. The original orchestral soundtrack sounds fantastic on an HDTV.

Probably the best addition is the option to radically modify how the game looks. There are a dozen or so pre-set filters, including one that looks like grainy black-and-white film stock. You’re also able to remove some or all HUD elements, such that there are no health metres, icons, or anything else superimposed on the game’s sweeping visuals. Then, you can pause the game in Picture Mode and snap some epic shots for your Toronto Guardian review.

As for any weaknesses, it bears repeating that some of the boss-puzzles are very difficult. You may spend upwards of an hour trying to figure out how to mount an attack, but at least once you do you will feel a sense of accomplishment unmatched in gaming. Also, the colossi understandably don’t like you clambering about on their backs, and they will shake you off. This means a lot of time scrambling to get back up again, which can get a tad repetitive.

Otherwise, Shadow of the Colossus is and remains an absolute standard-bearer for great art in gaming. The story, which begins simply but eventually reveals unexpected dimensions, is one of the best in fiction. The puzzles and combat are exhilarating. The wildly diverse colossi, which I would absolutely love to start describing right now but won’t because spoilers, have to be seen to be believed.