Our review of Scott Pilgrim vs. The World: The Comic Book: The Movie: The Video Game: The Remaster (actual title: Scott Pilgrim vs. The World: The Game – Complete Edition), developed by Ubisoft Montreal/Ubisoft Chengdu. Released on January 14, 2021 for PS4 (reviewed), Xbox One, Switch, Windows, Stadia, and Amazon Luna (which I had to google; apparently it’s a “cloud gaming service”). 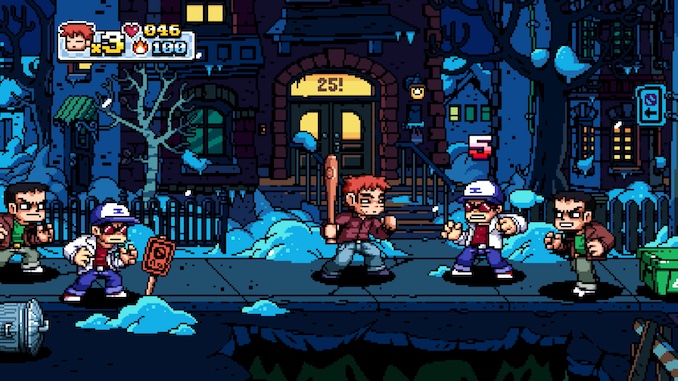 The Toronto’est video game to ever Toronto.

In co-op, yes. Alone, it’s absurdly difficult on all but the lowest difficulty setting. 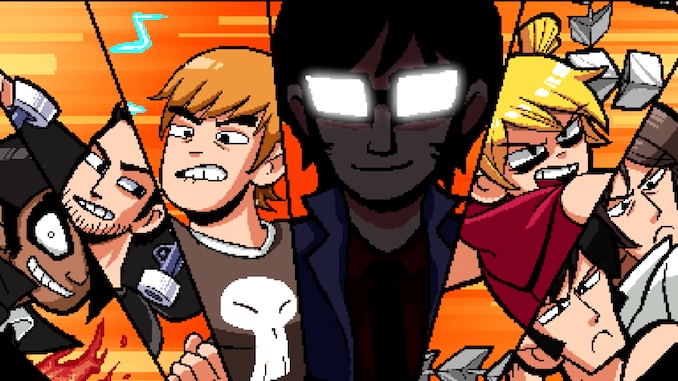 A NERDY TORONTO BASSIST WALKS INTO A BAR

A decade on, the Scott Pilgrim movie is still regularly cited as the best video game adaptation ever made. Even though, technically, it’s not a video game adaptation at all. Rather, it’s an adaptation of a brilliant and enduringly popular comic book series, albeit one overflowing with video game references, right down to its structure (“Seven Evil Boss Fights”) and aesthetic.

Scott Pilgrim: The Comic Book: The Movie: The Video Game: The Remaster (hereafter, Scott Pilgrim) feels like it was specifically designed for me. I know I’ve said that before, but it’s true: what other game has you roaming the streets of snowy Toronto, beating up punks on TTC buses, looting them for loonies and quarters, and chilling outside “Dee’s Tex Mex”? And it’s a 16-bit co-op sidescroller, to boot! The only thing missing is a David Cronenberg or Kids in the Hall cameo, but I guess you can’t have everything.

The Scott Pilgrim game is also a lot of fun. Especially with friends, and especially when you dial the difficulty down – it borders on unfun on the “regular” let alone hard settings. 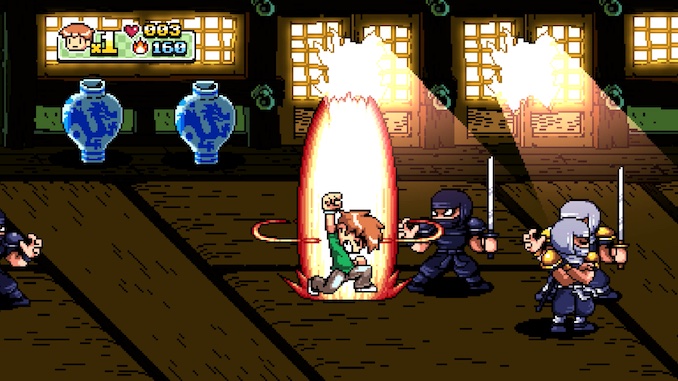 I happened to watch the Joshua Jackson cross-country Canadian cancer drama One Week (2008) recently. It’s an extremely Canadian movie – Jackson travels from Toronto to Vancouver, stopping in Parry Sound, Banff, Tofino, and many more picturesque locales along the way. He also crosses paths with an eclectic mix of Very Canadian Cameos, including Gord Downie (as, sadly prophetically, a cancer survivor), the Stanley Cup, and Joel Plaskett without the Emergency. Its Very Canadian Soundtrack includes folks like the Sam Roberts Band and Great Lakes Swimmers. The soundtrack also includes, I was surprised to note, a performance by Bryan Lee O’Malley.

How it is that O’Malley, the writer, artist, and sole creator of comic book character Scott Pilgrim came to be on the One Week soundtrack I can only guess. IMDb tells me that, aside from One Week, his only other soundtrack credit is the Scott Pilgrim movie, under the pseudonym “Kupek.” But let’s face it, it’s unlikely the One Week producers are diehard Kupek fans.

It’s very Canadian – and more specifically, Torontonian – that O’Malley shows up in One Week. It’s also appropriate: O’Malley’s iconic creation, Scott Pilgrim is very, very Canadian and very, very Torontonian. It’s a comic series in which major plot developments occur at Lee’s Palace, Casa Loma, and the Toronto Reference Library (site of an epic sword battle, sadly cut from the film adaptation). It’s a series where main character Scott meets his girlfriend on a TTC bus. It’s a series where Honest Ed’s looms large – as does the Pizza Pizza across the street.

Toronto is also a featured player in the Scott Pilgrim game. There are entire levels set on a TTC bus, inside a subway station, in Hillcrest Park, and at Casa Loma. The world map, a 16-bit-stylized view of Toronto, is the greatest thing I have ever seen.

As mentioned, Scott Pilgrim is difficult. More difficult, I’d hazard, than many of the classic 8- and 16-bit games it’s inspired by. I’m pretty sure that the comic book and/or film iterations of Scott Pilgrim pick up more Free Lives than are doled out in the entirety of his video game.

In the Scott Pilgrim game, enemies deal 3-4 times more damage than players. Health pickups are few and far between, and expensive (you have to step into an in-game restaurant like Sneaky – er, I mean, “Dee’s” – and buy food). You only get three lives. And the reason I think it’s tougher than, say, Contra, is that the levels are oppressively long. It’s one thing to restart Contra III, a game that can be beaten in a good 30 minutes (and I’m not even talking speedrunning). It’s another thing to lose on a Scott Pilgrim Level Boss and restart that entire 40 minute level.

On top of which, online doesn’t work. Or at least, not well. We’ve tested on multiple consoles (PS4 and PS5) and on varying Internet speeds, and Pilgrim has a nasty habit of crashing mid-level – and a brief Reddit search confirms we’re not alone. That’s a pain in any game, but especially in something where levels are so long. Oddly, the error message is simply the word “RYAN”. Unless it’s some sort of weird tribute to fellow Toronto comic god Ryan North, that’s simply not acceptable for a next-gen re-release specifically built around online play. 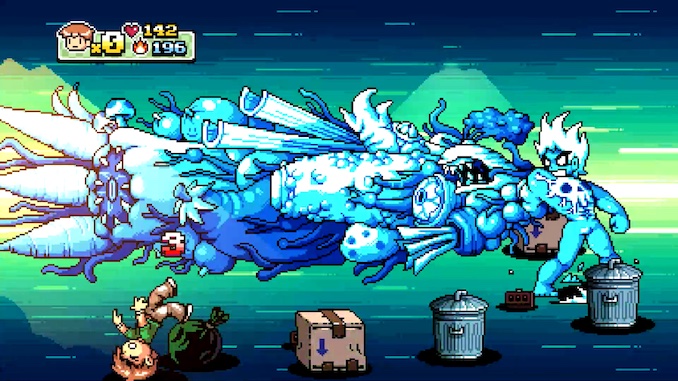 I’VE LIKED YOU FOR A THOUSAND YEARS

Fun fact: Scott Pilgrim’s name comes from a 1997 song by Halifax-based indie band Plumtree. You might vaguely remember the “Scott Pilgrim” video, which got quite a bit of airplay back on late-90s MuchMusic.

And while it’s frustrating that online play is still plagued by connection problems, Scott Pilgrim is still an easy recommend. You can’t go over to your friend’s house to play – not yet – but in local co-op or when online is working, it’s a lot of fun.

Scott Pilgrim is the greatest tribute to Toronto I’ve seen outside the movie Last Night, and it’s a joy to play. RYAN NORTH be damned 😉

Visit the official page for Scott Pilgrim: The Comic Book: The Movie: The Video Game: The Remaster here.

And for our review of the Scott Pilgrim board game – which is also awesome – click here.