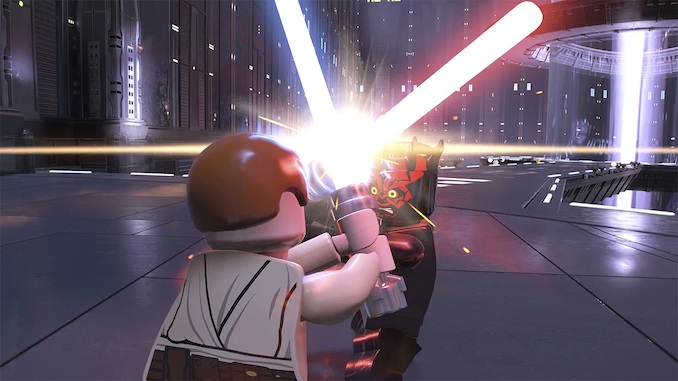 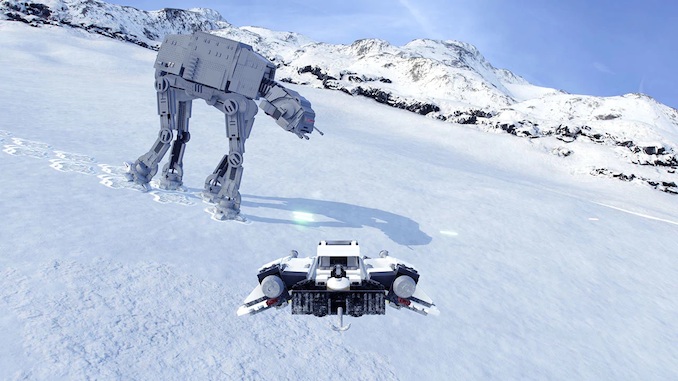 I’m a sucker for the LEGO video games.

Give me 191 characters in LEGO Marvel 2, and you just know I’m going to devote the 60+ hours necessary to unlock them all, Throg included. Even if they’ve all been minifig’ified, there’s something undeniably exciting about swapping between characters, from the famous to the obscure, in a virtual LEGO recreation of a beloved franchise. It’s the same impulse that drives Pokémon games, only with LEGO you’re recruiting iconic pop culture characters that transcend gaming.

LEGO Star Wars: The Skywalker Saga is in many ways the culmination of the LEGO video game formula. (The peak of the LEGO form, on the other hand, is the LEGO Millennium Falcon which sits at the top of my Toys ‘R Us wish list.) Skywalker Saga encompasses all nine films in the Skywalker triple-trilogy, from The Phantom Menace (ugh) to The Empire Strikes Back (yay!) to The Rise of Skywalker (double ugh). The characters may be teeny tiny versions of the ones you love, but they’re teeny tiny adorable versions of every character you love – and then several dozen more you’d forgotten about.

Skywalker Saga looks glorious, it plays wonderfully, and it features some of the best, and kid-friendliest, co-op this side of Kirby. It’s also going to be home to DLC that brings in the rest of the Star Wars universe, including Rogue One, The Mandalorian, and, one hopes, the Star Wars Holiday Special. After Skywalker Saga, I’m not sure I’ll need to ever play another LEGO game – unless LEGO Star Trek comes along. 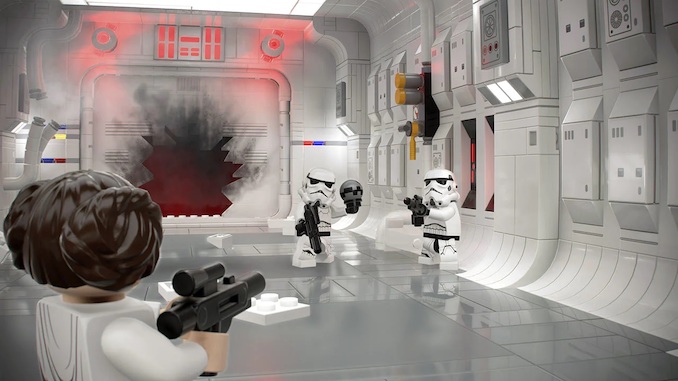 ONE RING TO RULE THEM ALL…

I can still remember how long it took to unlock everything in Lego Star Wars II: The Original Trilogy on the PS2, and how daunting it felt.

So yes, Skywalker Saga is more than a tad overwhelming. It’s also, rather unfortunately, cluttered. Menus are cumbersome, and it can be difficult to track how many of which widget you need to unlock which gizmo. There are minifigs, minikits, Kyber bricks, Datacards, Core Upgrades, Class Upgrades, and, needlessly buried despite their importance, the special abilities like “stud multipliers” which help you rack up millions of the in-game currency.

The level structure can also be misleading. At the start, you’re able to pick from three “episodes” – I, IV, or VII – although the correct choice is IV. Eventually, as you complete each “episode”, you’ll unlock the remaining films within its respective trilogy. Each episode is itself broken down into five story missions, along with a plethora of side missions, bonus challenges, and more. Confusingly, story missions are set in half-open world, half-scripted areas, which means you may think you’re in the midst of completing an objective, only for the game to prompt, “do you want to start this mission?” You may find yourself longing for the good ole days of LEGO Star Wars hub worlds. In previous games, you’d hang out in, say, the Mos Eisley cantina, where each door led to a separate movie. It was simple and straightforward, and the cantina was always a fun place to hang out between missions.

No matter, though. Mash the X button enough times, and you’ll find yourself (or yourselves, if you’re playing, as you should, in local 2-player co-op) in one of the game’s dozens of impeccably rendered LEGO Star Wars worlds. Whether you’re swooping between the feet of an AT-AT on Hoth, or taking the high ground against an angsty Anakin Skywalker on Mustafar, you’re bound to be impressed, and quietly amused by, the LEGO renditions of all your favourite scenes and characters. 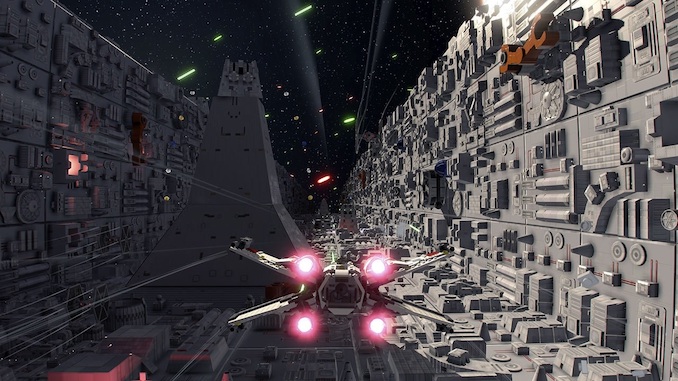 Skywalker Saga‘s missions are uniformly excellent. Because you can’t die – remember, this is ostensibly a kids’ game – Saga encourages you to be as silly and aggressive as you want, with little in the way of penalty. While hardcore gamers might balk at this, it’s helpful to think of Saga as being more about the experience, rather than “winning.” Indeed, “completing” all nine episodes is just the beginning. The real challenge, and the real fun, is in revisiting every one of the 45 missions in Free Play mode, which lets you swap between unlocked characters with the tap of a button. See a glimmering gold metal object? Send Boba Fett, IG-88, or another bounty hunter to use their special weapon to blow it up. Stumped by a puzzle that requires you to sneak past an enemy? Well, Saga gives you about 1,338 Jedi characters to pick from, and they sure do love their Mind Tricks.

At this point, it’s worth mentioning Saga‘s incredibly entertaining vehicle missions. These levels have always been a series highlight, but zipping through the LEGO Trench Run or piloting your LEGO Podracer on a PS5 is, truly, some of the best Star Wars vehicular gameplay I’ve ever experienced. If someone were to lift just these levels, de-LEGOfy them, and release them as a standalone next-gen game, I would be first in line.

And so Skywalker Saga goes. After initially making your way through LEGO retellings of each of the nine core Star Wars films, you’re given the opportunity to revisit them over and over again, unlocking alternative paths and exploring with a roster of characters pulled from all eras. Ever wanted to see Jar Jar Binks take on Kylo Ren? Curious how Yaddle would fare against the Rancor? Much like a real-world toybox, half the fun is in mashing all these characters together in unusual and amusing ways.

However, if Skywalker Saga is the culmination of all things virtual LEGO, it may have overstepped when it comes to the control scheme. Specifically, the decision to switch to an over-the-shoulder camera for ranged combat was probably a mistake. Part of the joy of LEGO games is running around like a maniac, blasting everything and hoovering up the thousands of LEGO studs that serve as in-game currency. The over-the-shoulder perspective, because it narrows your range of view and because it requires some precision, makes this harder, and also slower. It reminds me of Gears of War, and that’s not something you necessarily want in a collect-a-thon like this. You may even get virtual whiplash from rapidly switching back and forth between firing your blaster and reverting to the standard camera which sits further back. At least it runs at a smooth frame rate, even when you and your co-op partner are doing entirely different things in different parts of a level.

One thing lacking in Skywalker Saga is the trademark humour of the earlier LEGO games. The earliest LEGO titles would forego voice acting in favour of humourous grunts and squawks. Cutscenes played as sideways (and very silly) versions of familiar scenes, while the levels themselves would often tweak Star Wars “canon” for the sake of a joke or two. Skywalker Saga has full voice acting by a cast of decent enough sound-alikes; the problem is that they often aren’t doing or saying anything funny. Dialogue is more or less lifted straight from the films, and it’s typically only in the minor background details that you’ll encounter a decent joke. There are jokes here, to be sure, and some of the easter eggs are sure to elicit a chuckle (especially anything to do with Spaceballs), but they land far less often than I was expecting. It’s tough to thread the line between homage and parody, but Skywalker Saga often feels like a straight LEGO adaptation of the movies, and that’s an odd choice for a game that’s inherently so ridiculous.

In the end, though, none of that really matters. Completionists are already clocking 90+ hours on howlongtobeat.com, and even though I’m nowhere near that, I’m having a grand ole time working my way through the game, getting sidetracked by hidden items and, even better, hidden jokes, and generally trying to convince myself that 374 characters (not counting DLC) is an achievable goal for 2022.

Our review of Gotham Knights, developed by WB Montréal. Available now for PS5 (reviewed), Xbox X/S, and Windows. WHAT IS […]