From the African Copperbelt to the back woods of Muskoka, acts of faith tells a story about the power of belief, the disillusionment of youth and the eternal struggle between good and evil. Written by David Yee, directed by Nina Lee Aquino, and starring Natasha Mumba, acts of faith will have its World Premiere (live stream) presented by Factory Theatre on November 18, 2020 (free, registration link to secure a spot at the end of this post).

Synopsis: The story follows Faith, a young woman who gets mistaken for a prophet. When a revered religious leader attempts to take advantage of her plight, she begins using her ‘gift’ to right wrongs and punish the wicked. As her spiritual notoriety grows, her own faith gradually erodes, driving her away from her home and the church in a quest for justice. Part Passion narrative, part modern retelling of David and Goliath, acts of faith is an action-adventure in the skin of a catechism. Far from home, Faith will come up against the ultimate test of her convictions in a final confrontation between sin and sainthood, morality and godliness. 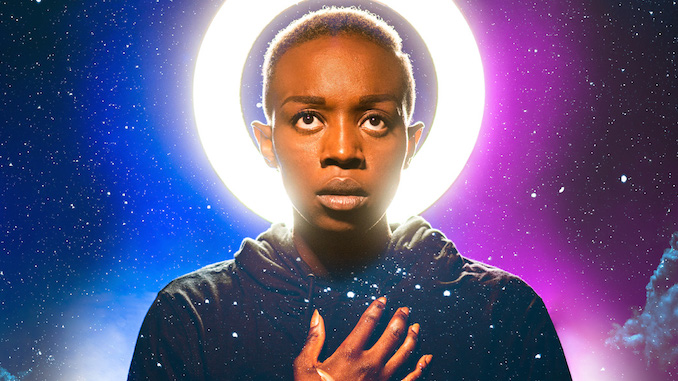 Natasha Mumba was born in Kalulushi, Zambia and is currently based in Toronto. She graduated from the National Theatre School of Canada and selected credits include: Factory Theatre – Trout Stanley; Canadian Stage – Measure for Measure, Much Ado About Nothing; Shaw Festival – The Hound of the Baskervilles, Henry V, Dracula, Middletown, The Adventures of the Black Girl, Alice in Wonderland; Obsidian Theatre – School Girls; Or the African Mean Girls Play; The Citadel – The untold story of Robin Hood.

Tell us about your character and what is her “gift”?

NB: Faith is a Zambian girl temporarily based in Canada. She’s incredibly smart and funny. I would say that her “gift” (without giving anything away) is her wit and resilience. She has an incredible amount of courage for someone her age and her pursuit of justice I find very inspiring, considering all that she goes through.

How did she discover that she was someone special?

NB: Like a lot of us, Faith discovers something new and special about herself when she least expects it, and right before she gives up on herself.

Does your character go through any sort of imposter syndrome? That feeling that many of us go through as we second guess ourselves.

NB: Oh for sure, Faith is interesting because she actually asserts herself into a space she knows she has no business being in, and then later discovers outside her control that in fact and much to her surprise, she did belong there, whether or not she had previously believed she did.

Working with David Yee and Nina Lee Aquino, what have you learned from them? You’re all very talented.

NB: Indeed they are both so insanely talented. David whipped up this stunning play in a matter of weeks and it’s so incredible watching him maintain a really beautiful balance of collaboration while still sustaining the integrity of his play. Working with Nina is always a joy, we get on really well and her generosity and transparency always create this incredible and exciting space for me as an actor to thrive in.

With everything our world is going through now, what makes this play important to see now?

NB: First, we always need more work by IBPOC artists produced. We always need to continue to advocate for more empathy and understanding in these spaces by telling a wider array of stories.

Secondly, this play is about faith, and who/what we place it in and additionally how we react when we have been let down or disappointed.

We have been in several moments of suspension like this in our current political climate. We have been watching and waiting to see who will partner and stand against the injustice that has and continues to torment and harass many communities around the world. So, in the wake of justice not being executed, how do we as humans manage this frustration and neglect. This is a part of Faith’s journey as-well and we get to see how far she will go to illuminate the truth she believes must come to light.

The performance will all be done live, but presented virtually on a livestream. Does that affect you as an actor and the way you perform at all?

NB: Well, this is truly all so new to me and I’m still figuring it out—but I will say it’s just more intimate. I have less of a reach; I don’t have to worry about the balcony, my mic is right by my chest and the audience is so close, they follow me throughout the space. It’s like film /tv in that way, but the bones of it are still theatre.

Who do you think would benefit from seeing this play?

You’ve also been involved with Factory Theatre in other ways. Can you tell us more?

NB: My time as Apprentice Artistic Director at Factory was so incredibly enlightening and insightful. Working under Nina Lee Aquino was such an incredible privilege, she reimagined what leadership looked like for me. I was empowered to bring my full self into my work and continue building my skill sets as an Artistic leader, on my terms.

As for blockbusters, we were anticipating Harry Potter and the Cursed Child to go on stage this month at the Ed Mirvish Theatre. You were also cast in that. What’s the status?

NB: I’m not at liberty to say, but of course I look forward to the time when we can all gather in a theatre again, especially with a show as magical as Cursed Child. It’s exactly the kind of show and energy that would make the return to the theatre so incredibly thrilling.

The World Premiere of acts of faith presented by The Factory Theatre will stream live on November 18, 2020. Tickets are FREE of charge but audience members must register in advance to secure a spot. For more information and for tickets visit www.factorytheatre.ca.

The Adventures of Tom Shadow At the Factory Theatre in Toronto

When I was little, Peter Pan was one of my favourite books. I loved the thought of an adventure to […]

Factory Theatre is at the beginning of its somewhat saucily named “Naked Season.” First up in the six show bill […]