It’s a warm summer night in 1926 when former lovers meet under the stars in small town Newfoundland. As they reminisce of times past and thoughts of what the future holds the story of love and loss unravels. Yes, the stars align for Salt-Water Moon. So beautiful is this classic story written by David French and re-imagined for the stage by the award-winning director Ravi Jain. 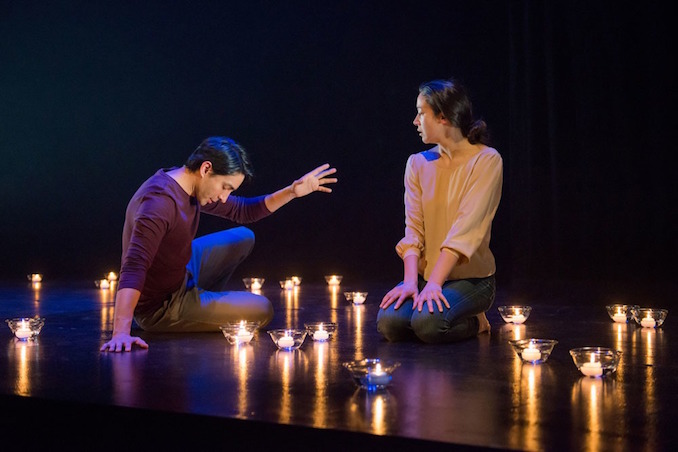 This is classic theatre storytelling that blissfully takes a “less is more” approach and  brings the focus back to the highly trained actors themselves. Mayo Nguyen (Mary Snow) and Kawa Ada (Jacob Mercer) embrace the full 90 minutes with Ania Soul who role is two-fold as narrator and singer.

Soul opens the show quietly with her soothing and soulful voice with her acoustic guitar to set the tone. We learned that she had composed a few of the songs for the play when it was at the Factory Theatre in 2016. She also performs some traditional Newfoundland songs and remains on stage throughout the play offering live music accompaniment and narration to enhance the emotions of two main characters.

The story follows Jacob’s returned from his mysterious trip to big city Toronto a year after leaving Mary with no explanation. When they reunite it wasn’t where things left off. Mary, who is angered and confused, is now engaged to another man. Will they get back together?

Candles are placed along the floor of the stage to recreate a dreamscape of the starry sky. That’s the only prop the actors have to work with. This minimalist approach opens the door to imagination. How you see the dark road or the moon lit porch is up to you, but the focus is on the story itself. “We wanted the audience engaging their own imaginations with what they saw. So you see a juxtaposition with a modern actor in say, a pink shirt and blue jeans but you’re told she’s wearing a yellow dress with make up. We really wanted to have that playful conversation of past and present. David French’s own words and stage direction, are very present for us but we’re choosing another way to represent them for another audience,” said Jain  at the opening night’s post-show Q&A.

He explains the idea was stripping this story down to what’s essential about two people under a star-filled sky. “We wanted to distill this story down to it’s essence in order to make it accessible for a whole new audience and still find a way to honour the traditions,” said Jain. ‘But in that space sits the tension which for me, is the theatre. We’re not giving you everything. We’re allowing you to see your own porch and have your own idea of what’s happening.”

This direction also carries through with the dialogue. Although it takes place in Newfoundland we aren’t hearing the accents we would expect, but hints of the east coast language definitely catch your ear.  It’s that playful interpretation that Jain had mentioned that makes this so charming. Changing expectations is refreshing.

If you’re needing a break from the constant sensory overload of everyday life, this play should inspire you to be present and in the moment.

The Factory Theatre’s production of Salt-Water Moon is on stage at the Panasonic Theatre until October 29, 2017, as part of the Off-Mirvish Season. Tickets start at $39. For more information visit www.mirvish.com

“A Day in the Life” of Toronto Creative Daniele Bartolini

Daniele Bartolini was born and raised in Italy. Specifically, he is from the ‘culla of the Renaissance’ Firenze, known to […]

Get Inspired And Take Action With CBC Podcasts’ The Kill List

In December 2020, a body was found on Toronto’s Lake Ontario coast. Her name was Karima Baloch, or Karima Mehrab, […]