A new eatery has arrived in town and it’s not “oh another plant-based vegan” place but one with a substantial following. When I had mentioned by Chloe was coming to a few friends their immediate excitement caught my attention. When the casual restaurant opened four years ago in the West Village in New York it was a runaway success. Today, by Chloe has 16 locations including four in London, U.K. This is their first restaurant in Canada and they chose to plant their roots at the stylish Yorkdale mall.

Samantha Wasser, founder and creative director, who’s family was already established in the fine dining restaurant scene, had the idea of opening a plant-based casual restaurant. When they were looking into various spaces she came upon a corner property in the West Village at the corner of Macdougal and Bleecker Streets. that had been left derelict from a previous restaurant. It was a location she felt had potential and the rent was reasonable even though, at the time, wasn’t the most desirable area with a lot of businesses turning over. “I was so interested in having a corner space,” said Wasser. “I fell in love with this location that was overlooked by many – there was a fire in the space before and it was just left alone. I began doing a lot of research and I remember walking around the West Village and kept looking at the space but everyone kept saying it wasn’t a great spot. It used to be a place called Cafe Borgia and it was where all of the beatniks use to hang out. It was the hotspot for famous poets like Allen Ginsberg and Jack Kerouac, there’s so much history here. I really wanted to bring it back to life.” I dug deeper to discover that Andy Warhol, James Dean, Joan Baez and Bob Dylan also frequented the previous establishment. 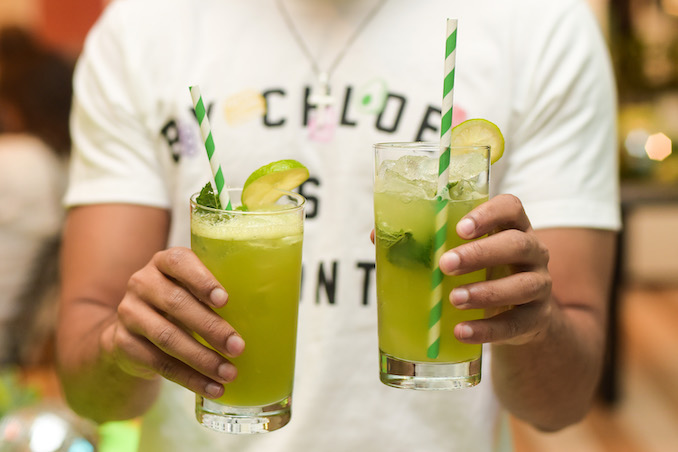 The location was also near a university which was very appealing for foot traffic. “We liked that it was close to NYU and felt students would be essential to the growth of our brand,” said Wasser. “We saw that the younger generations were more interested in eating better and super conscious of what they were eating. They were also more adventurous with their food.”

The wishlist also included lots of natural light and insisted the establishment have a bright space, both indoor and outdoor, to set the tone and establish by Chloe. She knew social media would also play an important part in getting the word out.

They decided to open the doors to their first location in July of 2015. “Fast Casual” restaurants were just starting out and it was a runaway success but not without some growing pains. They decided to move forward into this style of restaurant and thought it would be okay to forgo wait service in order to have more accessible, delicious and well-sourced food. by Chloe opened during the summer break with the thought that it would be slow since the students weren’t there. “We thought we would have time to work out any kinks before the students came back. We couldn’t keep up. We were understaffed and it was our first time doing fast-casual.” They were greeted with line-ups immediately and it caught them by surprise. The turn out was beyond what any of them had expected. Even though her family was already in the restaurant business the fast-casual style of service was a completely new experience. “I remember when we opened and I was sitting with the head of operations and we were getting all of these orders and they would be coming out to the window and getting to the customer. I remember thinking how does it get from here to there or how do you pack for to-go or to stay?” There were lots of little details that were important in the process and everything had to move quickly. Dishes were made fresh to order and delivered to the table at first. Customers were given numbers on stands to be brought to their tables but then the tables all filled and people were standing around with numbers. Then they tried calling out names but then it became a constant yelling out of names. Eventually, they settled into a groove and the ordering system worked and kept the flow.

The formula worked and customers were requesting locations outside of the U.S. A key communication tool for the eatery is consistency in maintaining engagement and keeping a close relationship with their customers. Social media has played an important part as they had anticipated. “I’m all about direct messaging and having open and honest conversations,” said Wasser. They’ve been active in taking note of where people are requesting them to open up and Canada kept popping up. They did their homework and felt the city would be a great addition. So, when the opportunity came up at Yorkdale, Wasser felt it was the right time to bring by Chloe north of the border. “In Toronto, we were seeing not only the restaurant scene being incredible but the vegan scene is growing and pushing beyond anywhere else we were seeing in Canada. When the Yorkdale property came about it just check so many boxes for us. We thought if we didn’t take it, then we might not get that opportunity again.” 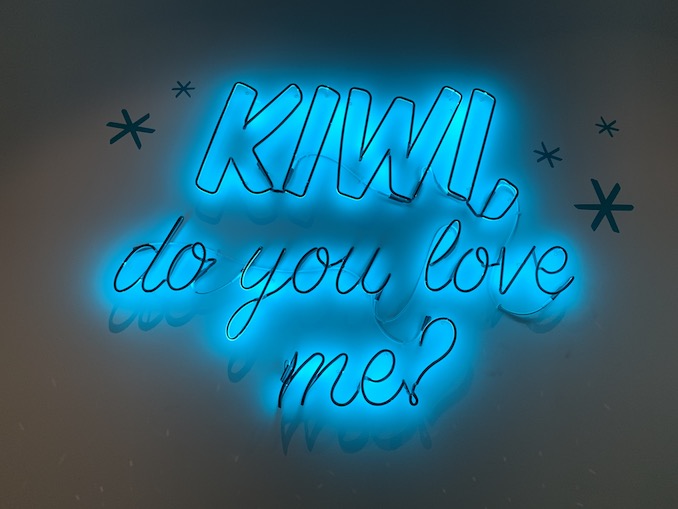 This is not just their first location in Canada but it’s also the first indoor mall location for by Chloe which Wasser tells us is a different approach for the brand. They had to rethink the space in keeping with their desire for light and the ability to keep the feel of the brand. The facade was important to keep the consistency of the brand. Yorkdale property management was in agreement. The beauty of this mall is that they encourage the brand to make the space their own and we are already witnessing that with such spaces as TORA, Restoration Hardware, IQ Foods, and Laduree. by Chloe has that feel and charm of the original West Village shop with the black and white awning, brownstone and even a “second floor” that looks like an apartment. The iconic woven swing chairs are in the windows and comfy banquette seating line the side as well as the inviting communal table. The space is bright and airy with a tall ceiling. The brand is meant to be fun and each location also includes a nod to the locales with neon spin-off sayings on the walls and — well, make sure you visit the washrooms.

The menu itself is “plant-based” and 100 per cent vegan. But the approach is refreshing. Wasser tells us there are so many misinterpretations of what vegan food is. She recalls when they first launched and one of the first questions they were asked was “is it raw?”

“People assumed it was going to be tasteless and not filling,” said Wasser. “Vegan food at that time when we started was so serious and to be honest, a little judgy for people that didn’t understand what it was.” For her, being approachable and fun is very much part of the brand.

The team just wanted a delicious fast meal option that people wouldn’t feel bad about or be educated on. The tone is light and kitchy. “I remember when investors were telling me it seems so childish but I was telling them it was intentionally so. We did that on purpose. It was because people were taking it too seriously. We just wanted people to think its fun and delicious, oh, and by the way, it just so happens to be vegan instead of trying to change the world.”

It’s also about love, compassion and being an inviting brand instead of saying you can’t eat here because say, you’re wearing leather. It’s one step at a time. “Who am I to say who can or cannot eat here?” said Wasser. “Why would I want to serve just one type of person? Instead, I want to get that fur or leather wearing person to try a different meal and perhaps think differently. We know that even having someone just change their meal once a week, month or a year does add up. If you’re single-minded about who you’re serving then you’re not really thinking about creating change. For me, it’s come as you are whoever you are and we’re here for you. You don’t have to sign on some dotted line to say you’re 100% vegan.”

The menu is pretty much their core “tried and true” customer favourites including the Guac Burger and the Quinoa Taco Salad – both highly recommended. There are a few additions that are fun takes on Canadian favourites including a Poutine and a Maple Bacon Burger. Wasser also mentioned they are also working on Nanaimo bars. “Everyone was telling me it was a childhood favourite so it’s fun for an outsider like me to play on nostalgia and that emotional attachment of what we grew up with.” By the way, their desserts are ridiculously good (go for the Cinnamon Espresso Cookie that’s the size of your face).

Wasser tells us they always think about flavours and ingredients first but like to push further. Plating is important. For example, salads are presented in layers rather than tossed. “There are so many textures and colours and we want people to see their food.” Just check their @eatbychloe Instagram page and you’ll see. 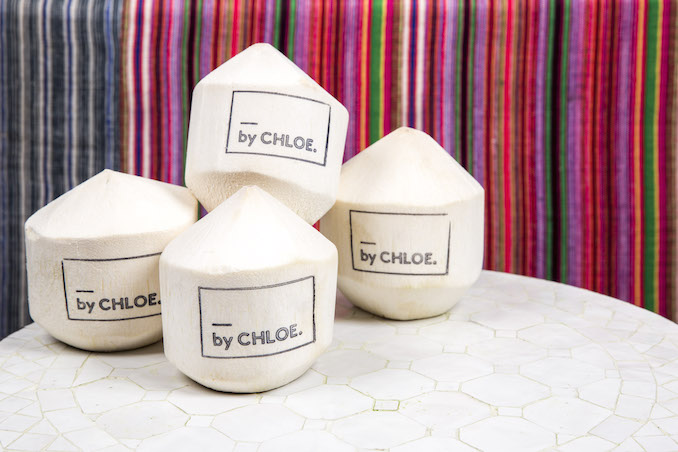 And where did the by Chloe name come from? To her, it was always about the flexibility of the name and giving it space to be open-ended and fun. The name also gives the brand the ability to collaborate with others. Recently they did a limited collaboration with a CBD brand. They also did a successful Carrot Dog collab with a brother and sister team who were creating smoked vegetables that was highly successful – they actually managed to work with Kobayashk aka the King of Hot Dogs to be the face of the campaign who was blown away with the taste and texture.

When it comes to Valentine’s Day, I love when my honey gets busy in the kitchen…(I’m talking about preparing a […]

Away Kitchen on Queen a more casual, everyday dining experience

Away Kitchen + Cafe’s new location on Queen West, just a few steps east of the corner of Bathurst, serves […]