A country could get used to this.

Twelve weeks and two days since that other Canadian singularity, Toronto’s own Bianca Andreescu just became the first Canadian to win a Grand Slam tennis title.

HOW ABOUT THAT LOCAL SPORTS TALENT 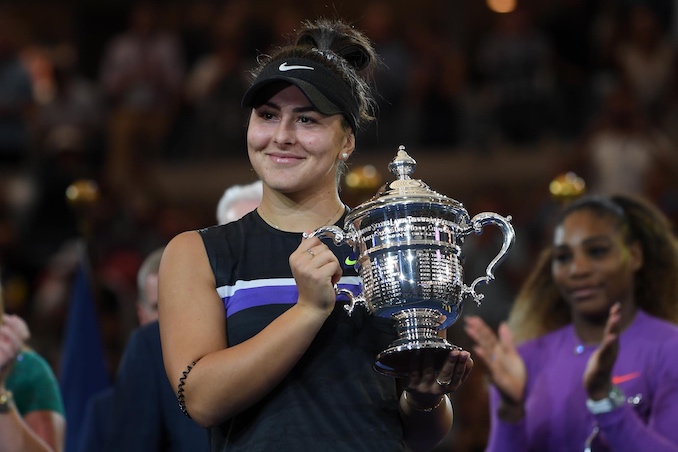 After all, it’s in her blood. Born June 16, 2000 – making her the first person born in the 21st century to win a Grand Slam title – in Mississauga, Bianca spent the early part of her childhood in her parents’ native Romania, before returning to Toronto to sign on with Tennis Canada’s National Training Program. A few years after that, Bianca ranked among the top junior players in the world. Last year, she ranked 243 on the WTA tour. At the beginning of this year, she was ranked 152.

Let’s just let that sink in.

One year ago, Bianca Andreescu, the current U.S. Open champion, was ranked 152nd in the world. A year ago, Serena Williams, her opponent, was ranked 16th. Going into the final in New York, Serena was No. 8, and Bianca No. 15.

Today, having beaten Serena, Bianca is ranked 5th. How did she get here? (Same way you get to Carnegie Hall. #rimshot )

Okay, she actually got here through an impeccable run of superb tennis, winning and winning again, first with an unexpected finals appearance at the ASB (Auckland) Classic in January, then an even more unexpected championship at Indian Wells (California) in March. Then, a month ago at the Rogers Cup in Toronto, Bianca took a default victory against Serena, who was forced to retire from injury.

That win catapulted Bianca to No. 15, but perhaps just as importantly, gave rise to one of the greatest, and most touching, sports moments in recent memory. Consoling her injured and distraught opponent, Bianca, who grew up watching and idolising Serena, uttered the immortal lines, “Yo, I’ve watched you your whole career. You’re a fucking beast.”

Bianca wasn’t even born when Serena won her first Grand Slam title. (Incidentally, that was on the same New York court, back at the U.S. Open 1999.) At 19, Bianca is half Serena’s age, who turns 38 in a couple weeks. But at 5’7″ to Serena’s 5’9″, and with a power swing that almost rivals Serena’s famously superhuman touch, Bianca is, if nothing else, the ideal athlete to demonstrate that Serena’s grip on a certain metaphorical torch may now be weakening. Yes, Serena remains the greatest living tennis player. (Sorry, boys.) And yes, it’s far too soon to predict how Bianca will look a month from now, let alone a year or ten years down the line. But, as Serena herself put it at the victory ceremony, “If anyone could win this tournament – outside of Venus – I’m happy it’s Bianca.”

So are we. Canada. Toronto. All of us. Even the partisan New York crowd, who hooted and hollered and “Serena!” ‘d all match long, much to the consternation of the Chief Umpire: even they were eventually won over by the Mississauga Phenom. Especially when, after the match, Bianca pulled a Canadian and apologized to fans for defeating their idol.

Just shy of a month ago, Bianca Andreescu, going into the third set in her Rogers Cup matchup against Karolína Plíšková, gave herself a pep talk. As she later described in a post-victory press conference, “I told myself, ‘go big or go home.’ Literally go home. My home is like two minutes from here.”

Sure, it’s a bit further from New York to Toronto. And from Roland Garros to Toronto. Melbourne to Toronto. Wimbledon to Toronto. But it’s a hell of a journey she’s on, and it’s nice to know that wherever she goes, whatever she accomplishes, Home will always be, well, just a couple minutes from here.

And when she gets back, let’s throw her a parade, eh?

Old Golf Photographs from the City of Toronto Archives

On my latest visit to the City of Toronto Archives, I found a ton of great images of people playing […]

James Juhasz is a 20 year old sailor of the laser class, originally from Oakville, Ontario. He began sailing at […]

A Brief History of The Rogers Cup Tennis Tournament