Ai Weiwei is of one of the world’s most influential artists and human rights activists. His art exhibitions and films attract a global audience. His latest and highly anticipated show Ai Weiwei: Unbroken is now at the Gardiner Museum in Toronto. This exhibition features iconic ceramic works including Sunflower Seeds, Coca Cola Vase, recent works including blue-and-white porcelain jars depicting global migration crisis amongst several other thought-provoking works in different mediums. This exhibition also includes the international debut of a new LEGO Chinese Zodiac 12-portrait series. 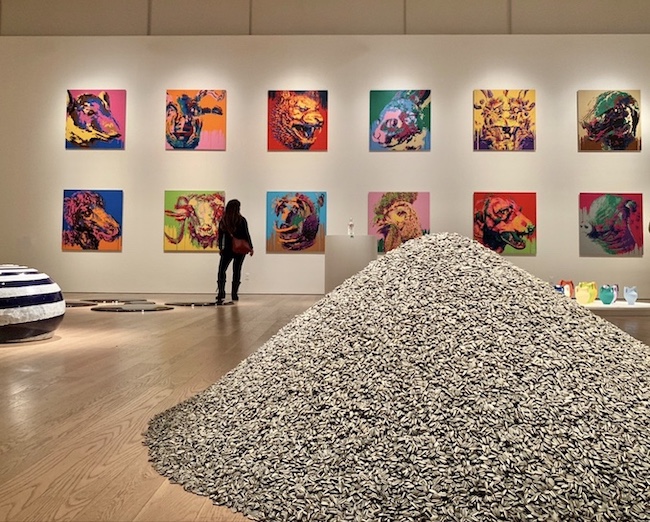 Ai Weiwei has worked with ceramics for over 25 years. He initially trained in the medium as a teenager and delved in even more so in the mid 1990s when he returned to Beijing after living the the US for over ten years. Sequoia Miller, Chief Curator at the Gardiner Museum, tells us at that point Ai Weiwei started exploring the markets and antiques in Beijing and found a lot of historical objects including artifacts from the Han Dynasty. He started combining Chinese history and tradition with modern art with the idea of making new works of art.  Ai transformed ceramics taking a look at a wide range of forms. He started working more actively with studios particularly in Jingdezhen, considered the porcelain capital of China, and has continued his investigation of the medium.

“One of overall ideas of this exhibition is to show a cross section of his work in ceramics, as it has changed and evolved,” said Miller at the media preview. While this exhibition has a strong focus on ceramics, it was also important for the museum to include other media because Ai Weiwei’s work is so complex and very diverse.

What made us a little nervous when viewing the exhibition is the fact that there are no dividing lines or walls or any particular path to follow leaving the pieces open for viewers to get very close. Ai Weiwei wanted the exhibition installations  to have multiple pathway so visitors can map their own journey through the space. “We wanted viewers to find their own path and connect their own experiences in life to the work that they see and when they want to encounter them,” said Miller.

BREAKING BOUNDARIES: Ai has been breaking boundaries since he began as an artist. Famous for his works including Dropping a Han Dynasty Urn, a documented photographic tryptic in the 1990s, of the artist destroying a priceless 2000 year old historical artifact shocked many in the art world as well as the Chinese government. The documentation of this destruction is said to be worth more than the urns themselves. Ai Weiwei pushes the thought of what value and cultural heritage really means. The controversy continues today. He’s continued to break boundaries both in his work and in his practice and in his new work, Lego Chinese Zodiac Series, he is breaking boundaries with his use of non-traditional art medium. If you look closely you’ll see that they are regular pieces of plastic LEGO. From a distance you can see each zodiac head clearly but upon closer examination lines blur and images are not as clear. Hmmmm? Looking forward to discussing that when we return for a second look. If the Zodiac series seems familiar, you’re right as Ai Weiwei has featured Chinese Zodiac images in the past including bronze sculptures in his earlier piece Circle of Animals/Zodiac Heads (2010) 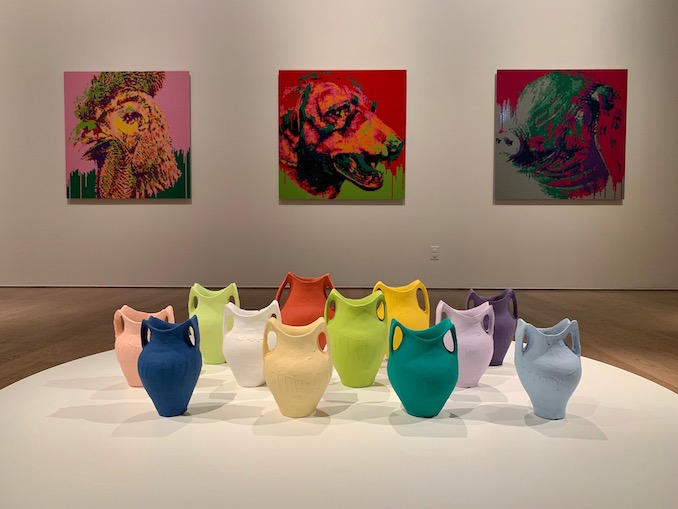 TRADITION & IDENTITY: Has to do with the way Ai has use the historical approach to ceramics and porcelain in particular to reframe and rethink what some of the traditions and practices mean. The Sunflower Seeds installation is an incredibly minimalist yet impactful display of this theme and considers each piece as part of a whole.  Originally, the full  scale installation premiered in 2010 at the Tate Modern in London (UK) filling the interior of the Turbine Hall with 100 million porcelain seeds. It took over 1600 artisans to create the seeds that are individually hand-painted. The entire project took two and half years to complete.  The Sunflower Seeds have since been divided into sections to be exhibited in various galleries and museums.

The exhibition at the Gardiner Museum features one ton of  Sunflower Seeds. “The installation raises the question of individual vs the multiple. How does the medium shift when we function as a collective and how does it shift when we conceive ourselves as individuals,” said Miller. The form of this overall piece can take many different visual manifestations. Ai Weiwei was interested in this particular exhibition to show this as a cone and having it in the centre of the room so each of the other works radiate from it.  Similar to the Tate Modern exhibition, this installation continues to question what does it mean to be an individual? Are we powerless unless we act as a whole? 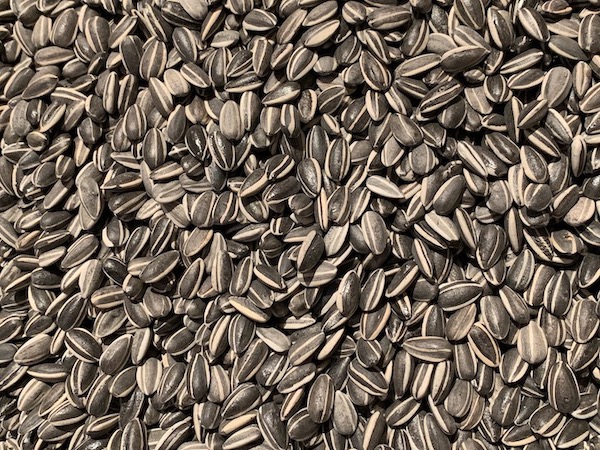 MATERIALS OF HUMAN RIGHTS: In Ai Weiwei’s art, the materials themselves are equality as important as the subject in hand. Often referring to Chinese culture and humanity at large. At the same time, relatable to people around the world. Miller tells us this has been very important to Ai’s work particularly since he was released from house arrest in 2015 and relocated to Berlin, Germany. After his release, he spent several years documenting the migration and refugee crisis in the Mediterranean in 2015 and 2016 which yielded his feature film, Human Flow, as well as a series of porcelain works. 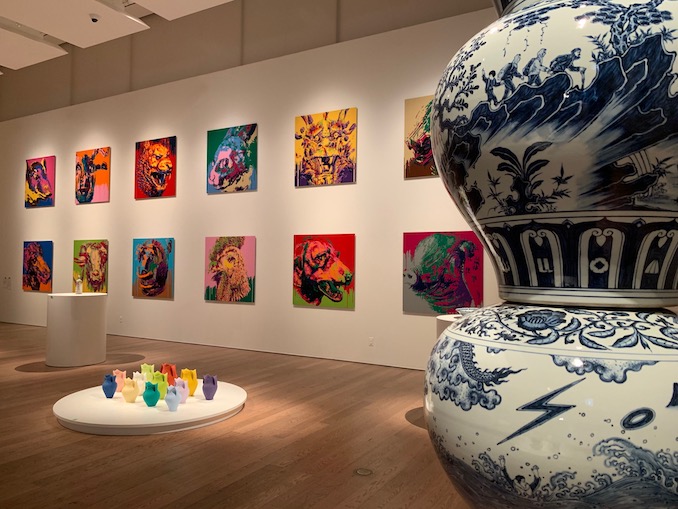 In this exhibition six blue-and-white large jars are stacked in a column. China started producing and exporting porcelain painted with cobalt blue and white in the mid 14th century. It became one of the most dominant trade goods in the world and continues to be sought after today. The style of painting on Ai Weiwei’s jars is historical but the content is very contemporary. Specific images that are integrated are scenes of war and destruction. “Ai Weiwei approached the migration crisis in the Mediterranean as an odyssey – it is a situation that is relevant for the whole world but certainly within the Mediterranean. It’s not just a Middle Eastern or Syrian problem or a North African problem or a European problem – it’s a global problem,” said Miller. The jars depicts a six phase cycle: war, ruins, journey, crossing the sea, refugee camps, and demonstration. Each of these images were garnered from Ai Weiwei’s personal experience as well as his photographs, and published imagery. 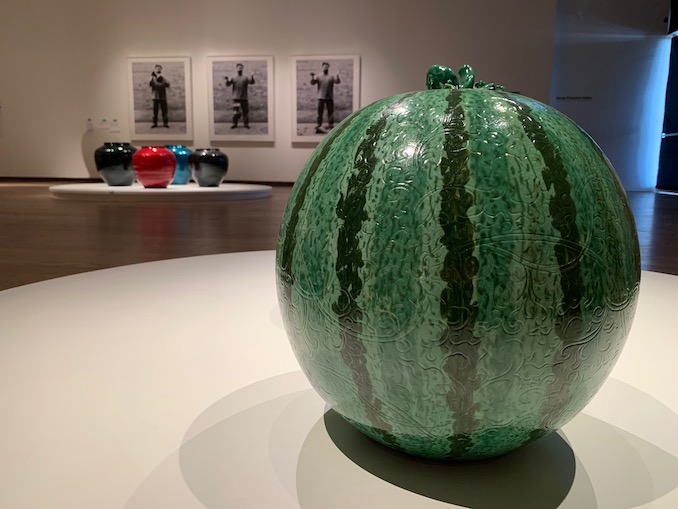 Just outside of the exhibition hall is the work of local artist Nurielle Stern who was commissioned by the Gardiner Museum to create works in response to Ai Weiwei’s work from a Canadian perspective. Also worth noting are several events planned throughout the duration of the exhibition including the AWW Free School series that delves deeper into Ai Weiwei’s themes. 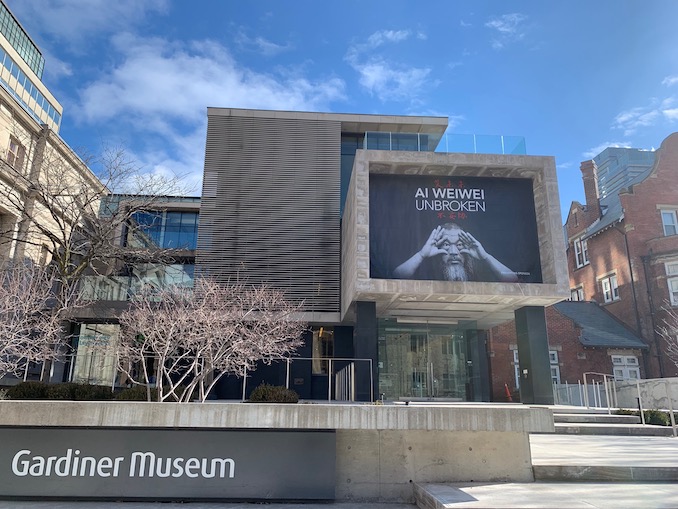 Ai Weiwei: Unbroken at the Gardiner Museum (111 Queen’s Park) until June 9, 2019. Access to the exhibition is included with general admission.

Toronto (and the GTA) is a mecca for restaurants representing so many different cultures. Our city attracts the attention globally […]