Rise Carmine is the musical outlet of Liam Colbert’s creative energy. Liam, a Toronto-bred multi-instrumentalist, derives his tight, melodic sound from a breadth of influences, ranging from 70s classic rock bands like Led Zeppelin and Aerosmith to more contemporary rockers like Queens of the Stone Age, Tame Impala, and White Reaper. The concept of groove is paramount to his music, and a thick bass-driven thread connects all of his material.

His music has been described as “all at once nostalgic and fresh”. He takes pride in his eclectic song writing, delivering hard-rock riffiness and psychedelic synth-driven bliss on the same record. Liam believes that any music that’s worth a damn is music that breaks the rules, but in order to break the rules, one has to learn them first. A decade spent in choir school and four years immersed in jazz and R&B at Berklee College of Music has resulted in creative flexibility that allows him to do just that. 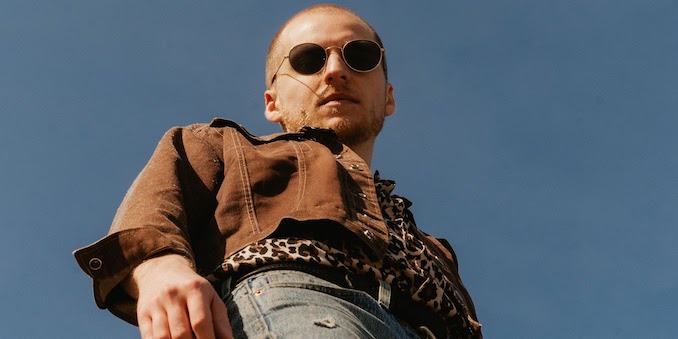 # of Albums: None yet. I’m releasing my first EP in fall 2021. You can check out an EP I released under the name Patiohawk in 2017 called ‘Toastmaker’.

Latest Release: My first single ‘Down’ came out June 4.

Latest Single: ‘Down’ – A down-tempo swirling psychedelic song inspired by the likes of Pink Floyd and Tame Impala. It was produced by Dave Shiffman (PUP, Weezer, Vampire Weekend).

Favourite band as a teenager: My first band was called Philomena from the song Phil Lynott wrote about his mother, so Thin Lizzy. I have what some would call a slightly concerning love for twin-guitar harmony and it all started with those guys. I have a ton of respect for Phil Lynott and in my mind he’s one of the most underrated songwriters. Some people may only know them from the song ‘Boys are back in town’, but they have a ton of great music and have influenced many bands along the way.

Favourite band now: Depends on the week. This week I am listening to Fontaines DC & Royal Blood, previously it was White Reaper. They are a great young band where the sum is greater than the parts and the parts are all very good. I was this close to opening for them at the Horseshoe the last time they were in town. One of my favourite albums to come out in the last few years was Weyes Blood’s ‘Titanic Rising’–unbelievable songwriter.

Guilty Pleasure Song:  Hot Chip – Night and Day. One of the most fun shows I’ve been to at the Phoenix.

Live Show Ritual:  Saying hi to everyone who came to see me while simultaneously trying to not blow out my voice before the show. Results in a lot of miming. It’s a tough balancing act.

Favourite local artist: I think the OBGMs are a breath of fresh air in the punk scene. I also like Claire Hunter – beautiful voice and great songwriting.

Has to be LP. While singles and short EPs are a much more popular way of releasing music these days, I hope the album never dies out.

I think by nature I’m an early bird, but everybody knows the best ideas come in the middle of the night.

Right now in 2021 the road is looking pretty enticing.

Hopefully shows are coming soon! For now, check out my debut single ‘Down’, and follow me to stay updated on more releases coming this summer.

If the World Cup is on, I want to be on College Street, if NXNE is on then Queen Street.

Bag of cans from Bellwoods Brewery and sitting under a tree at Bellwoods.

Depends on the day but it’s hard to beat a quarter-chicken dinner.

Parallel at Dupont and Dufferin has the best Falafel and Baba ganoush.

Pink Leather Jackets was essentially formed in a day. On October 1st Steve was moving in with Chris in Toronto. […]