The wetlands at Rouge National Urban Park just became the home for 49 baby Blanding’s turtles. The babies are getting a ‘head start’ in the soon to be completed urban park that will be Canada’s first national urban park that will span more than 79 km2 making it one of the world’s largest protected areas in an urban setting. 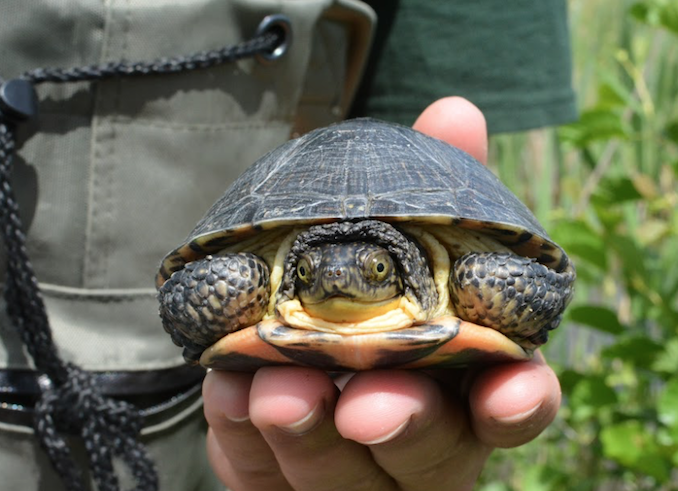 The Blanding’s turtle is recognizable by its bright yellow throat and jaw. The dark head and legs often have yellow speckles. The shell (carapace) is smooth and is more oblong in shape. The underside (plastron) is yellow with dark blotches. They  have a long life span of up to 80 years but until recent efforts by the Toronto Zoo’s head-starting program, the species was facing imminent local extinction. While they are listed on the endangered species list by the International Union for Conservation of Nature and a provincially and nationally threatened species, efforts are now being made to help the declining population.  This is the fourth year of the reintroduction and recovery program which also includes research, habitat creation, outreach and education. There are plans to release about 50 Blanding’s turtles back into the wild each spring under this program.

These turtles were rescued as eggs from at-risk nests in a stable source population in southern Ontario and have been raised in a controlled environment at the Toronto Zoo for two years. As newborns, Blanding’s turtles are the size of a loonie. They’re soft making them an easy snack for predators. They’ve been cared for past their most vulnerable stages and when their shells are harder and less appealing to common urban creatures like raccoons, skunks, and foxes.

University of Toronto (Scarborough) has joined the project assisting with monitoring of the turtles. Parks Canada, Toronto and Region Conservation Authority, and the TorontoZoo are also participating in long-term habitat improvement projects that will provide a better chance of survival and sustainability in the Rouge Valley area.

Of the 8 native turtle species in Ontario, 7 are now classified as ‘Species at Risk.’ Turtles have a long life span and are known to be highly mobile being able to travel long distances to find food or a mate. However, reproduction happens in their later years making the turtle population highly sensitive to natural and human threats. Protecting this species and their habitat helps benefit other native turtles, as well as birds, fish and other creatures that use the same wetland homes.

You can learn more about the various turtles species in this guide created by the Toronto Zoo. 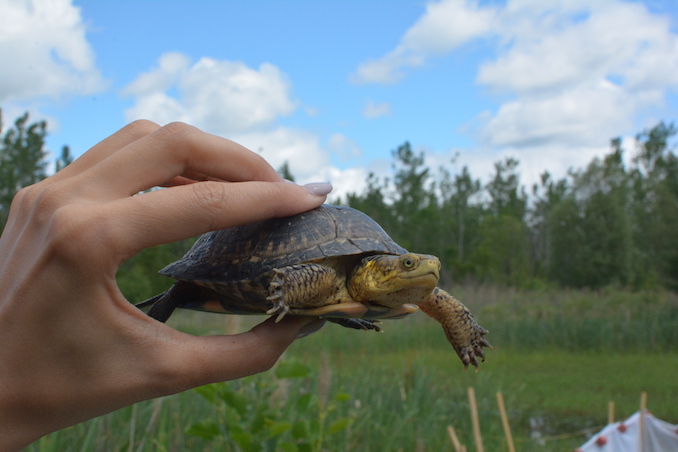 We’ve been hearing news lately about turtle sightings in the GTA so what should you do when you spot one?  Here’s what you need to know…

How to help and handle an injured turtle: (source: Ontario Turtle Conservation Centre)

There’s a very exciting live action happening next week at the Toronto Design Exchange. Over 100 masterpieces from Canada and […]

We’ve been keeping an eye on what’s happening down at Toronto’s Union Station. The transformation is creating the area into […]