13 year old Greater One-Horned Rhino named Ashakiran (aka Asha) gave birth to a male calf on Thursday, January 4, 2018 at 11:04 am. Toronto Zoo announced the bundle of joy as the first birth of the new year. 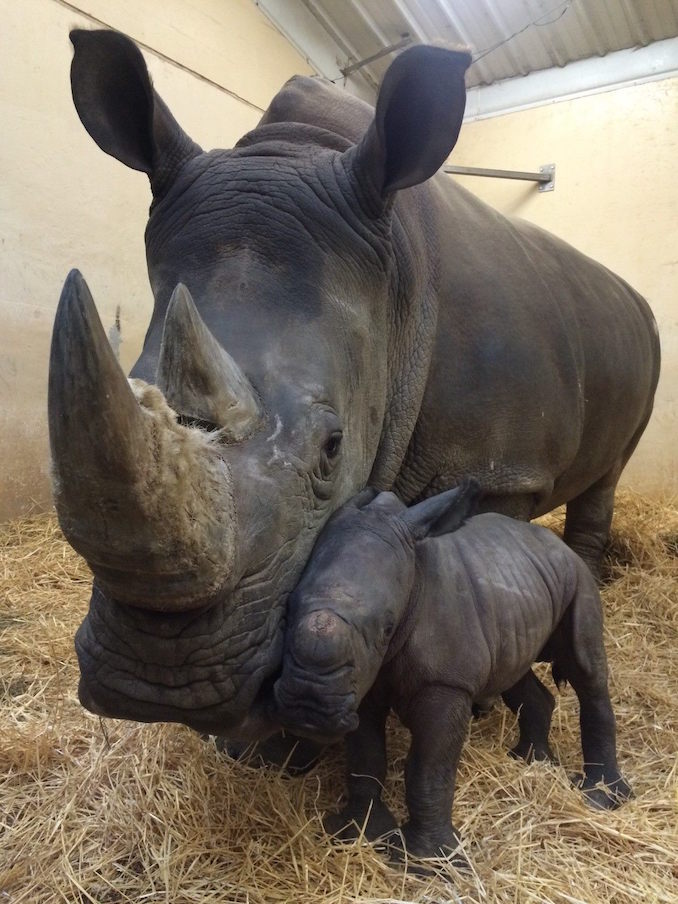 The greater one-horned rhino, commonly also known as the Indian rhino, has a gestation period that lasts 425-496 days, or 16 months. She was moved from public viewing into a maternity area within the Habitat mid-December, where video cameras monitored her closely. The new 2018 baby has yet to be named.

This is the second calf for Asha and Vishnu, father and 14 year old male. Asha gave birth to another male calf, Nandu, on February 17, 2016. This is the fifth birth of the greater one-horned rhino in Toronto  Zoo’s history.

But here’s the sweetie in his first appearance…

The Greater One-Horned Rhino is describe as having a thick, dark-gray hide, pinkish in the skin folds, and is covered or studded with many small tubercles. The folds on the body resemble a heavy plated armour coat. It has a single large horn, present in both sexes that consists of keratin- a protein also found in human hair and nails and can grow from 20 to 60 cm. in size.

Males can weight up to 2,2000 kg. Females 1, 600 kg. New borns weight in a 65-70 kg. Their diet consists mainly of grass and also fruit, leaves, branches from trees and shrubs. During the first weeks after giving birth, mother rhinos produce 20-25 litres of milk daily for their babies who will nurse for two years. And their horns appear after one year of age.

The species is currently listed as Vulnerable on the International Union for Conservation of Nature Red List of Threatened Species and there are only approximately 3,500 left in the wild. The Toronto Zoo is part of the Greater One-Horned Rhino Species Survival Plan which aims to establish and maintain healthy, genetically diverse populations, and overall conservation efforts to save this species.

Congrats to the new addition to the family!

Have you visited the rare Grevy’s Zebra foal that was born at the Toronto Zoo on July 26th? Tori, the […]