Coming up with five classic novels by Indigenous authors to read is not an easy feat considering that many, myself included, consider Indigenous voices to be the most exciting on the Canadian Literary scene since the 90’s. Suffice it to say that in this point in time, Canada is gifted with talented Indigenous poets, and writers of short fiction, children’s books, non-fiction and novels, the latter of which I’m concentrating on today.

The novels I am including here have, for the most part, stood the test of time and because of that, in two years my list will have changed dramatically if not completely. Nevertheless, despite some of these books being rather dog-eared by time and use, I think they’re incredibly important as a base of Indigenous fiction on which readers can build. What I have come up with is a highly subjective list of five important Indigenous novels in no particular order. 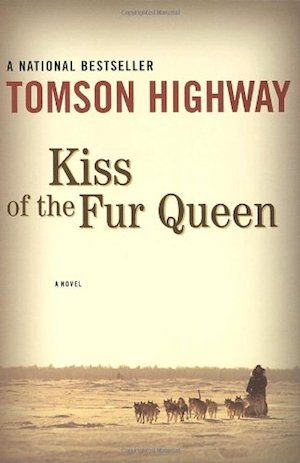 Kiss of the Fur Queen (1999) by Tomson Highway is a tragic, frightening, enlivening, and magical story that follows the Okimasis brothers from an idyllic life in the far north, through school in southern Canada, and then into the Arts in Winnipeg. Seemingly without trying, the novel confronts such issues as residential schools, sexual abuse, prejudice, religion, two-spiritedness, missing and murdered women, spirituality, identity, culture, a rapidly changing way of life in the north, and the transformative powers of dance, drama, visual art and music when aligned with one’s individual experience, culture, and vision. Highway has a knack for using magical realism to portray the other-worldliness of violence, trauma, epiphany, and spirituality: those aspects of reality that exist just beyond comprehension. 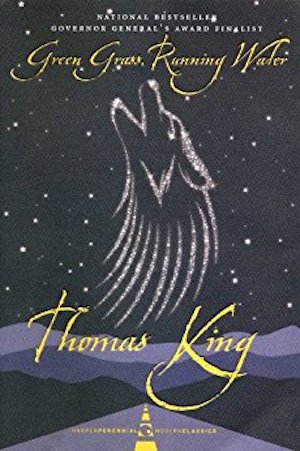 Thomas King has many fine books, but the one I keep going back to is his second novel, Green Grass, Running Water (1999) which is enticingly post-modern, irreverent, inter-textual, complex, and ironic. In this novel, four women from Indigenous creation myths disguise themselves as four fictional characters from European settler culture—Ishmael, The Lone Ranger, Robinson Crusoe, and Hawkeye—and set out to fix the world. They clash with various Biblical figures such as “Ahdamn” and Eve, Noah, and “Young Walks On Water” and mingle with the more realistic, contemporary characters who are entrenched in everyday concerns such as making a living peddling electronics, conceiving a child, and fighting a dam that will flood homes and land, even while they inherit the legacy of General Custer and his attempted annihilation of Indigenous peoples through a buckskin jacket. Whew! Complicated and political, yes, but Green Grass is written with a light touch and a strong, dark current of humour. 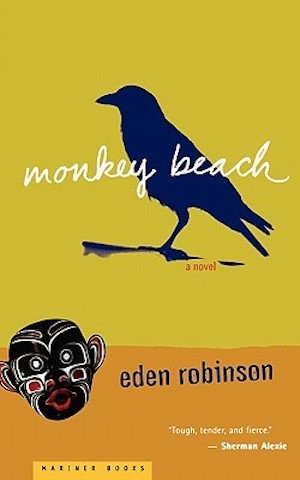 I may want to replace Eden Robinson’s mesmerizing first novel with her Son of a Trickster (2017) trilogy once the subsequent two books are published, but for now I’ll stick with Monkey Beach (2001), her debut novel that combines family brokenness with resilience, social structures with destruction, spirituality with mythical figures incarnate, and loss with empowerment. Lisa-Marie (named after Elvis’s daughter) is at the centre of what can be termed a coming-of-age story in which, while in pursuit of her brother—a competitive swimmer who seems to have disappeared in the sea—explores the depths of herself. Encountering talking crows, painful past events, and mythological beings including B’gwus—the legendary wild man of the West Coast—Lisa re-emerges, fully formed and powerful. 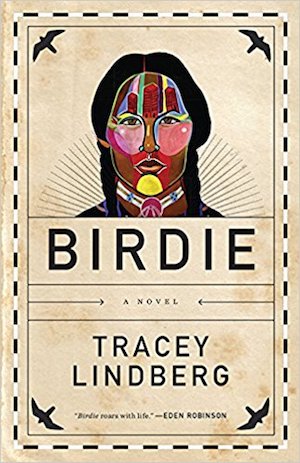 Birdie (2015) by Tracey Lindberg is a novel that, despite its themes of sexual abuse, mental illness, and murdered and missing Aboriginal women, delights with its engagement with the Canadian pop-culture figure of Pat Johns, who played Jesse of The Beachcombers on CBC T.V., and the unlikely sage and television star, The Frugal Gourmet, who manages to (literally) speak to the main character, Bernice or Birdie, even in her semi-conscious state. Though Birdie has a serious enough breakdown to keep her comatose until her chubby body has whittled down to the bone, the big, brave, and generous personalities of Auntie Val, Skinny Freda, and Lola, Birdie’s employer, pull both the main character and the reader from despair. These three female characters—four including Bernice—have not only endured, but overcome adversities, and in creating such raw, powerful women, Lindberg demonstrates that it is their wounds as well as their strengths that allows them to surmount the difficulties of their pasts and help Birdie do the same. 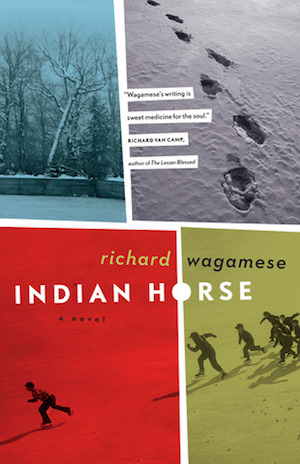 In spring of this year, we lost Anishinaabe author Richard Wagamese who had a baker’s dozen titles to his credit, many of them shortlisted or winners of writing awards. Considered a mentor by many, as his FaceBook page confirms, it was Wagamese’s difficult early life—which included foster homes, church-run schooling, abuse, addiction and homelessness—as much as his talent, love, humility, and commitment that made him not only an excellent writer of both fiction and non-fiction, but also a Teacher. Although his first novel Keeper ‘n Me is one that keeps coming back to me, the novel I am going to recommend here is Indian Horse (2012), largely because I’ve found it has deeply affected male readers in particular. As three of the four novels I’ve listed above focus on strong female characters, it is vitally important to include stories of boys and men in a time of twenty-first century challenges on all fronts, including an alarming suicide rate among the young. In Indian Horse, the story of Saul Indian Horse stretches large across the page catching the main character’s parents and other relations in a net of intergenerational trauma. Strangely, it is a hockey net, puck, skates, and sticks introduced by an idealistic priest that makes residential school tolerable for Saul, and it is hockey that helps propel him forward into a future of stamina and recovery.

About Joan Crate 1 Article
Joan Crate is a poet and novelist who taught English, Children’s Literature, Creative Writing, and Native Literature at Red Deer College, Alberta, for over twenty years. Her poem “I am a Prophet” from the collection Pale as Real Ladies: Poems for Pauline Johnson recently took part in U2’s concert in Vancouver. Her latest novel Black Apple (2016) confronts the systematic discrimination of the residential school system and the haunting of one in particular by focusing on two very different characters, Mother Grace and the gifted Rose Whitewater. Black Apple recently won the W.O. Mitchell, City of Calgary Award and was shortlisted for the Frank Heygi Award.

We’re in the thick of the holiday gifting season and as we go through our list, we know that a […]

This week I had the pleasure of diving into Black Apple, an award winning debut novel by indigenous author Joan […]