They Say He Fell is a highly personal play about playwright, Nir Bareket’s, struggle to cope with the loss of his brother who died at the hands of an angry mob in Palestine when he was just twenty years old.  Revived by Jivesh Parasram in 2015, the year of Bareket’s death, the moving events of the late 1940’s are brought to the stage.

Presented in the small studio space of the Theatre Passe Muraille, They Say He Fell is a somewhat intimate affair with just six actors on a small black box stage. For this reason, I was surprised to see leading actor, the extremely well spoken Steven Bush, use a microphone and read from a script on a lectern. Adverse to the nature of the piece, this was oddly distancing and created a physical barrier between Nir and the audience. The only use I can think of for the microphone was to add an ethereal effect on Bush’s voice, making him sound as if he were indeed talking from beyond the grave. However the result was to give the performance somewhat of a lecture style vibe rather than a personal revelation. 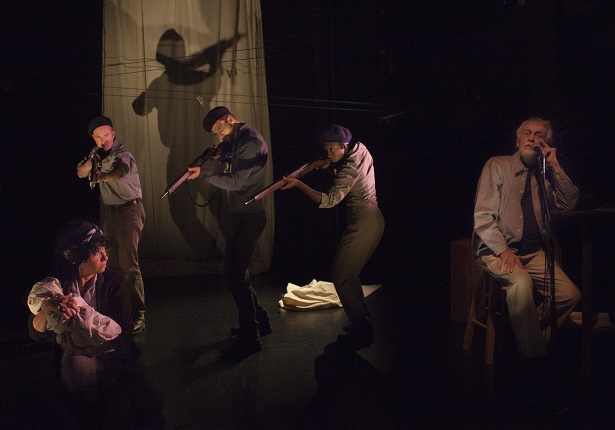 Conceptually, the piece was often presented as photographic “snapshots,” reflecting Nir’s later work as a photographer. At times this was theatrically engaging, especially towards the end of the piece as two physical photographs or the Bareket family were spliced to create a very moving “before and after” style juxtaposition. The ability to physically see these images was a luxury that was not afforded to the audience often enough throughout the piece; Nir often held and referenced photos but all the audience could see were the back of them. Instead, they ought to have been nicely displayed on the washing lines running across the space.

Parasram arguably does too much with the staging which includes microphones, projections, puppets, shadow play and a live video feed. Due to the snapshot nature of this piece, too many theatrical elements make the production feel at times cluttered and disjointed. 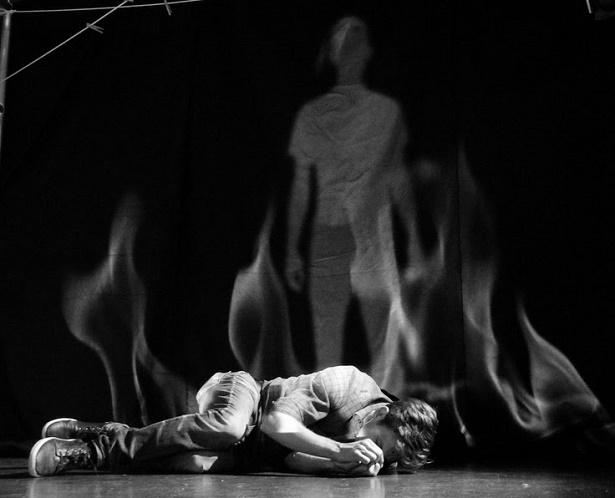 The calibre of casting was high. I already mentioned that Bush’s voice was clear; listening to him was nothing short of a delight as he captured many a subtle nuance in Bareket’s original script. Similarly Tom Arthur Davis, Virgilia Griffith, Maxine Heppner, En Lai Mah and Christopher Stanton worked well as a tight knit ensemble, bringing the piece to life. Griffith especially brought fantastic vocals to the piece and Davis presented quite the inner theatrical fire towards the end of the piece.

They Say He Fell is without doubt a great literary work which resonates with anyone who has ever “lost” someone. Whilst the show is of great personal meaning, I do feel that there is scope to make the piece accessible to a wider audience. I just feel a touch more work is needed here to make this piece of drama truly meaningful to those beyond its creators.

“A Day In The Life” Ann and David Powell of Puppetmongers Theatre!

Siblings Ann and David Powell, national treasures and Co-Artistic Directors of Puppetmongers Theatre, have been creating puppet theatre together since […]

Naughty or Nice: Venus in Fur has something for everyone

Venus in Fur, currently playing at Toronto’s Berkeley Street Theatre, is a mesmerizing psychological roller coaster of role-reversal and wicked […]

I got an opportunity to head down to The Lower Ossington Theatre last week and meet with the Director, The […]