Aidan O’Loughlin is a self-described “CBC darling,” having worked on several of their shows including the sketch comedy, TallBoyz and CBC/Netflix production, Workin’ Moms which has been nominated for WGC Awards, DGC Awards, Canadian Screen Awards, the International Emmy Awards to name a few. We spoke with him to learn more about his style and projects. 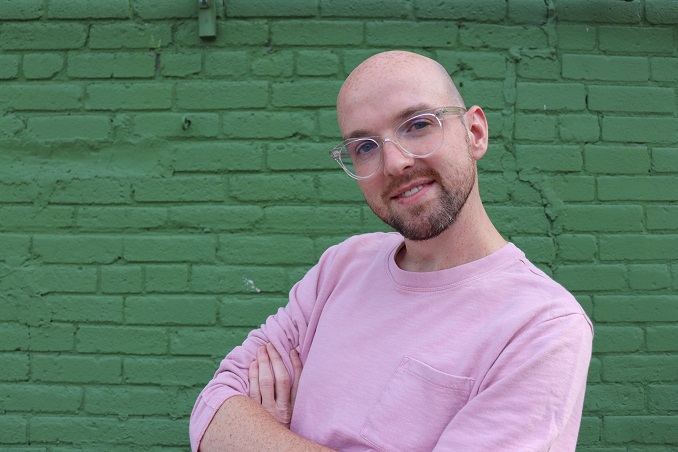 First and foremost, I would say that my comedy style is without a doubt, extremely, unapologetically GAY. I’ve joked before that being gay is probably my only redeeming quality. And honestly, that might be true. I remember growing up, realizing I was a little gay boy (I would’ve died for Leo DiCaprio on Titanic in 1998, and ironically I was closer to his ideal dating window than I am now) and knowing that being gay was something other kids didn’t like about me. Over time, through trial and error, I realized that if I was funny enough, I could make people laugh hard enough to accept all of me without concealing any of me. Who cared that I was gay if I had the best stories? Since starting stand-up, I’ve tried to incorporate that into my voice as a writer and into my performance on stage. I want to walk into a room full of anyone – gay or straight – and be so funny that they don’t care how much or little they have in common with me, it’s undeniable.

For sure Chelsea Handler. She was so formative to me developing the ability to voice what I thought was funny. In the same way as her, I think I need to point out when something is stupid and put it in a way that makes it clear to everyone else that it’s not just stupid but also funny. I can also see Mindy Kaling in the jokes I write. I love her ability to write jokes that are both one-liners and some of the craziest sentences you’ve ever heard. I strive to exude the same comfort and fun energy on stage as John Early and Kate Berlant. They’re so at ease, I think it helps live audiences relax and laugh freely. They know they’re safe at a John and Kate (not the TLC kind) show. And Katherine Ryan – she’s so smart and quick-witted and I really try to channel that.

Okay, this is embarrassing to admit, but for a long time, like WAY too long, I didn’t really understand what it was to be a comedian. I didn’t know what stand-up was. At the time I just thought they were “funny actors.” I remember discovering Margaret Cho’s Notorious C.H.O. when I was in high school and being like “what an interesting television show – when’s the next episode?”. I think part of the reason there was a disconnect in my understanding of what was going on comes down to not identifying with anyone I saw. Sure there were the girlies and the divas – but I knew that none of them were gay men. Or I was just dumb. Either is possible.

But now that I know they’re comedians, I can say my favourites growing up were Margaret Cho, Tina Fey, Amy Poehler, Maya Rudolph, Megan Mullally, Lisa Kudrow and Amanda Bynes.

Jesus Christ, Ali Wong makes me laugh. Her latest special, Ali Wong: Don Wong basically reinvented dirty jokes for me. She discovered so many new ways to tell jokes about topics that felt overdone before her. She has this way of thinking about a subject from every possible angle which churns out entirely new premises. It’s like she started digging in a mine everyone else gave up on and she found gold. Also, Nikki Glazer is incredible. The way she performs her jokes kills me. It’s like she’s surprised you think she’s gone too far every single time.

My pre-show ritual is comprised of 3 parts. The first thing I do is listen to or watch old recordings of my jokes to see if there’s a new way I should try phrasing something. It’s the worst part of my ritual. Nothing is more humbling than listening to your gay little voice tell jokes that you remember going better at the time. The next thing I do is fire up Selling Sunset for the 8 millionth time on Netflix. I put that show on, my eyes immediately glaze, my jaw is slack and my mind is blank. It’s the closest thing to meditation I can figure out. Also, their unhinged confidence is inspiring. And my favourite part of the ritual comes at the comedy venue: ordering some of the good stuff: a glass of the house white wine. I usually save it for after the show. It’s comforting knowing it’s there waiting for me. Like my daughter waiting to be picked up from daycare.

I really love Toronto for performing standup. The audiences here demand a lot of you. They want strong writing and performance or else they’re not that enthusiastic to see what you’ve got. Also, the comics in the city are so good, and I think seeing each other perform pushes us to try our hardest. My favourite venue in the city is Comedy Bar. It’s just home to me.

I have a bit about getting bullied for being gay growing up – shocking, I know. It’s my favourite because I think the audience is genuinely shocked by some of the names I was called, and rattling them off usually gets a groan of empathy. I think it brings them back to any time some kid was shitty to them growing up. But the reason I’m proud of it is, I am able to turn that discomfort into a really hard laugh with the subsequent few lines. And I tell it early in my set so it sets the stage pretty perfectly for what’s to come.

There’s nothing like seeing someone you’re about to be obsessed with live for the first time. Whether you’re in your own city or on vacation, I always think people should check out comedy shows. You never know who you’ll see and develop an unquenchable parasocial relationship with via the social media and podcasts they’ve appeared on.

Everyone in Canada hates Toronto and Torontonians so much and it’s like, yeah dude – we hate us too.

Yes, actually. I run a monthly show called Thirst Trap Comedy – usually at Comedy Bar on the second Saturday of the month. And on December 17th I’m excited to close 2022 out in a huge way: I’ll be doing our biggest Thirst Trap Comedy show ever at the Royal Theatre (608 College St) and tickets are available now on Eventbrite! Featuring some of my favourite comedians: Natalie Norman, Brandon Ash-Mohammad and Cara Connors round it out as our headliner. I’ve purposefully chosen a smaller lineup so the comedians will be able to do longer sets for us.

And my phone number is 647-KIDDING, SUCKAS.

Karis Anderson is one of my favourite comedians on the scene. It’s always a joy to see him on stage. He has a show called Twink Fight Club that’s just as psychotic and incredible as it sounds. Karis is so smart and hard-working and he makes me laugh my tight little ass off. I’m really lucky to be able to call him a close friend.

We had the chance to catch up with Hisham Kelati about his comedy style, influences and his Juno nominated debut […]

In her stand-up, Anishinaabe stand-up Comedian Stephanie Pangowish gives her comedic take on Indigenous life and business. Despite the seriousness […]