For this week’s recipe, Chef Chuck Hughes shared with us his delicious turkey meatballs recipe served on a pita topped with yogurt sauce and shredded cheese. 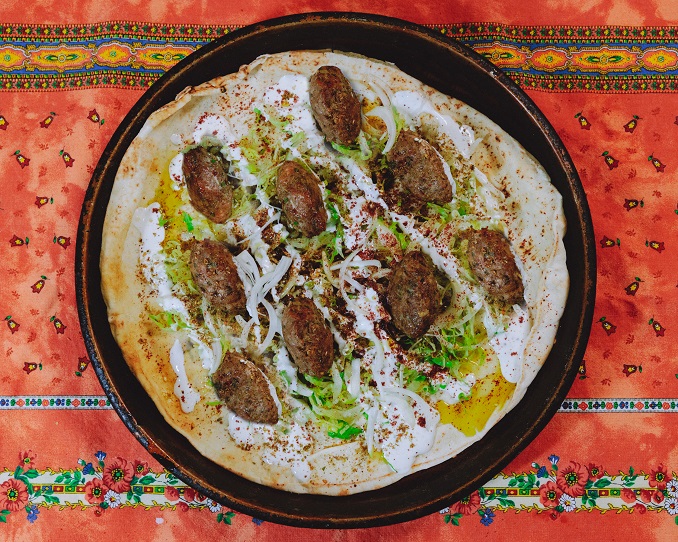 1. Combine all ingredients, do not overmix.

2. Form into quenelles or meatballs (about 1 Tbsp each)

5. Serve in warmed pita and top with shredded romaine lettuce and drizzle with yogurt garlic sauce.

6. Top with a sprinkle of Za’atar, Sumac, sea salt and drizzle of olive oil.

Chuck is the co-owner and executive chef of Montreal hot-spot Garde Manger. He is also the talented star of such shows as Chuck’s Day Off, Chuck’s Week Off, Chuck’s Eat The Street and Chuck & Danny’s Road Trip. His unbridled passion for entertaining translates into both memorable food and captivating television.

After going to culinary school and working in some of the hottest restaurants in Montreal he partnered with his two best friends and opened Garde Manger in 2006 to rave reviews and packed seating.

Since 2010, Chuck and the team at Crown Salts cater the VIP Artist World at Osheaga,Montreal’s renowned 3-day music and arts festival. Every year Chuck and his team create an unforgettable dining experience for the over 100 appearing bands at the festival.

Some of the other highlights of Chuck’s celebrity cooking career include; becoming the youngest Canadian chef to win on Iron Chef America; starring with nine other celebrity chefs on The Next Iron Chef: Super Chefs; joining an all-star panel of judges on Chopped Canada and starring in four Quebec series À couteaux tirés, La Relève, Le monde selon Chuck and L’atelier culinaire . He also produced two best-selling cookbooks “Garde Manger” and “Chuck’s Day Off.”

In 2015, he launched a line of highly anticipated food products. My Kitchen Staples are delicious essential items such as olive oils, vinegars, cocktail sauce, maple syrup, antipastos and hot sauces that Chuck uses in both his restaurants and at home. My Kitchen Staples are currently available in stores across Canada. Go to www.chuckhughes.ca to find the nearest one.

Most recently Chuck launched a cookware line exclusively with The Bay, available in stores now. Next up, Chuck will start production of his third season of Chuck and the First Peoples’ kitchen on APTN.

For this week, Chefs Toben Kochman and Elana Kochman shared with us this delicious Wild Mushroom Risotto Cakes with Lemon […]

Baro Restaurant‘s Executive Chef, Brent Maxwell, shared with us this Scallop & Citrus Aguachile recipe to try at home. A […]

For this week’s recipe, Executive Chef and owner of Open Concept Hospitality Michael Angleoni shared with us his delicious recipe […]