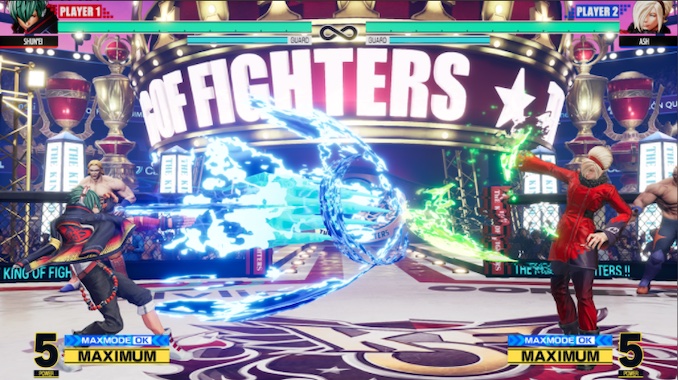 … it’s not the king of fighters, but it’s up there.

Toronto Raptors fans. People who couldn’t get enough of the Tekken bears. 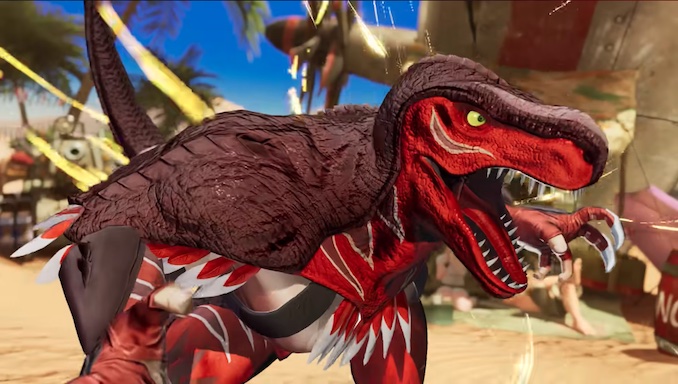 IF YOU COME FOR THE KING

KOF XV does a lot of things right.

For starters, it comes with a core roster of thirty-nine playable characters, making a mockery of the paltry launch lineups of Street Fighter V (sixteen!) or Mortal Kombat XI (twenty-five). Plus, one of those base characters is the King of Dinosaurs, who’s the spitting image of the Toronto Raptors mascot. This is an automatic win.

KOF makes some other wise choices. The default voice acting is Japanese, which should always be the case with a Japan-made game, unless that game is made by Hideo Kojima. KOF XV is also quite good at teaching you. The tutorial mode is short, clear, and to the point.

Unlike other fighting games, KOF XV also has fairly consistent move inputs across characters. So whether you’re playing as an anthropomorphic dinosaur or a sand-wielding mystery man, you’ll always have a decent grasp of what you can do. Gameplay is smooth, although the input-window for certain attacks is a little too demanding for my liking.

That said, KOF is complicated, with about a gazillion different special abilities, EX attacks, Shatter Strikes, Cancels, Guard Cancels, Super Specials, Max Specials, and Super-Duper Fantabulous Max Power Specials. (Only one of those isn’t real.) To be fair, KOF XV has less of a barrier to entry than previous releases in this series (see my tutorial comments above), but it’s not as audience-friendly as better-known fighting games. 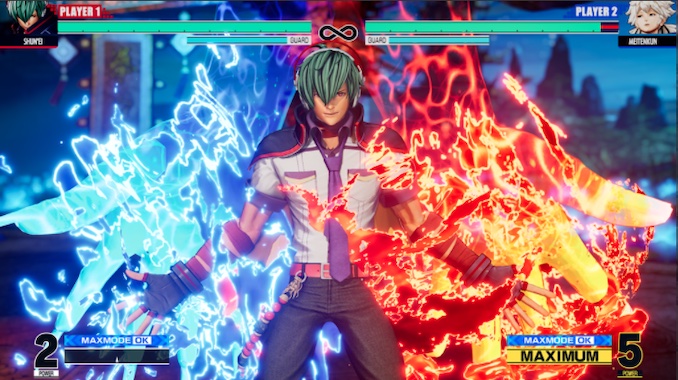 YOU BEST NOT MISS

KOF XV is a three-vs-three team-based fighting game. Those expecting Marvel vs. Capcom should be warned, however, that there’s no tag-team mechanic. Instead, each round of a match consists of a 1-v-1 battle. Once a character is defeated, the round ends, and in the next round their teammate takes their place. The victorious character remains, and their life bar is not replenished between rounds, although it does get a bit of a top-up. I like this system; it tilts the odds in favour of whoever lost the previous round, without ever forcing someone to start a round with only a sliver of health.

Gameplay in KOF is similar to Street Fighter, albeit a bit quicker and with more options for dodges, cancels, and recoveries. For example, there’s a dedicated button which lets you dodge in and out of the background. It’s a great (and cool-looking) way to slip through enemy attacks, though you’re exposed for a split-second at the end of the animation. It’s also possible to instantly hop up from a fall if you hit a button at just the right moment.

Graphically, KOF resembles Street Fighter, although its characters – Toronto Raptor excepted – are a lot more grounded. This also means, sadly, that they’re less interesting, with repetitive character design. Unless you’ve spent a significant amount of time with KOF, you’re going to have a hard time differentiating between, say, Random European Dude 1, Random European Dude 2, and Random European Dudes 3, 4, and 5. It’s not just that these characters lack the brand-name recognition of Ryu or Chun-Li or Sub-Zero; the designs are simply bland. Going through the screenshots for this review, I couldn’t even name all the characters. 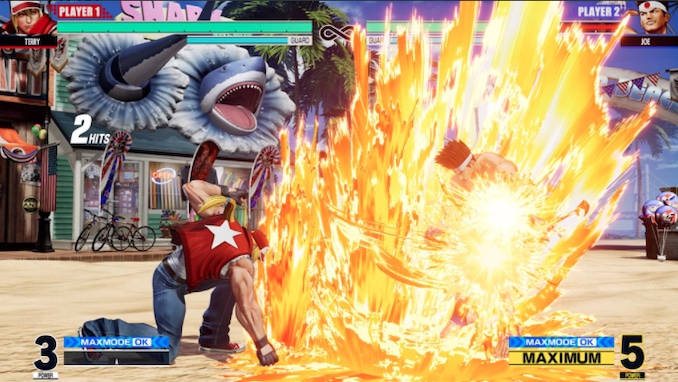 One odd thing about KOF XV is that it’s hard to build up your special meter. Or, to be more accurate, it’s too easy to deplete it. As in most modern fighters, KOF has a meter which builds up slowly over time. Use a portion of the meter, and you can boost a regular attack into an “EX attack”, or deploy various special moves. Save up your meter to maximum, and you can unleash impressive Super Specials or Climax Super Specials, which trigger pre-scripted attack sequences that are basically mini-cinematics. Unfortunately, if you’re not careful, it’s easy to accidentally activate EX attacks and other moves that eat a smaller portion of your meter, meaning that you may make it through a whole round without ever maxing out the meter.

Another thing that bugged me about KOF – because this always bugs me in fighting games – is the incredibly sexist character design. Yes, I’ve heard all the same tired arguments about “over-the-top” physiques, and I grant that the male characters are all finely-toned Adonises. But one need only look at the female character poses to see how much the male gaze dominates this game. It’s incredibly regressive, and feeds into all the stereotypes about video games and gamers. If there’s a Queen of Fighters, she’s probably mortified.

On the other hand, KOF‘s Jurassic Park game is on point.

Our review of Rival Megagun, developed by Spacewave Software (a Canadian company!). Released on November 29, 2018 for PS4 (reviewed), […]