DOGS OF THE YEAR 2021 returns to the CW Network with an all-new cast of characters to charm their way into our hearts. Hosted by Kevin Frazer (“Entertainment Tonight”) and Keltie Knight (“Entertainment Tonight”), this special airing Thursday, December 16 (8:00-9:00pm ET), highlights the most amazing dog stories of 2021. The show celebrate the dogs that go above and beyond, that leave their mark on society, and achieve the nearly impossible. While many of our furry friends are worthy of a spotlight, we’ve learned that our city’s own Miss Pickles the pug has been selected to appear in this year’s edition. 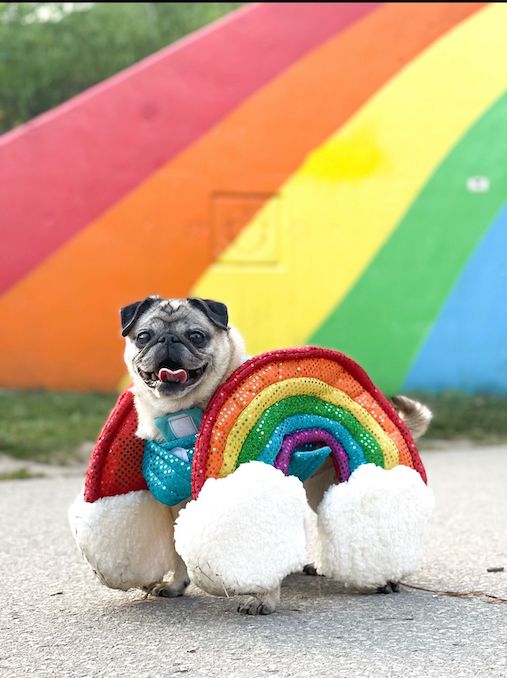 We checked in recently with Miss Pickles and her amazing human dog mom, Marg, to learn more about what they’ve been up to.

Dog of the Year! What does that mean for you and Miss Pickles?

Marg: It is such an honour that the CW network picked Miss Pickles to be featured as one of the dogs for their yearly special! Miss Pickles has overcome and accomplished so much in her 4.5 years since she’s been with us and it’s super cool that those accomplishments are going to be featured! We are so proud of Miss Picks and ready to show her off to the world!

Why were you selected to be part of this series?

Marg: Miss Pickles is an extraordinary pug on the internet who has the ability to make people smile for her cuteness, antics and her sickening drag looks! The Big thing that drew the producers to Miss Pickles is her ally-ship for the LGBTQ+ community. Not only does this include her drag look inclusivity but also the charity fundraising we have done to help out our local and Canadian LGBTQ+ charities including for the Toronto 519 and the rainbow railroad project.

Miss Pickles has been a darling in Toronto’s Pug rescue scene can you tell us how you found each other?

Marg: Miss Pickles was our second foster through a Toronto based pug rescue called Pugalug. Pickles needed us as much as we needed her, her personality really meshed with our lifestyle and we just found her irresistible. 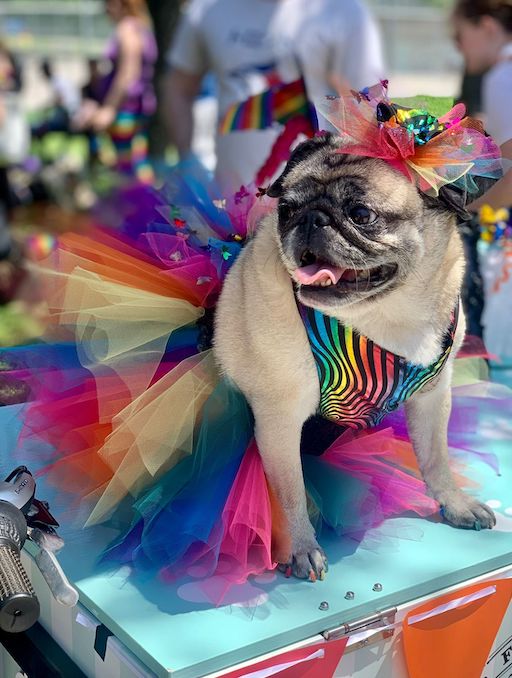 Marg: Miss Pickles is well known in the drag community for her imitation of RuPaul Drag Race contestants runway looks. She has gotten numerous shout outs and reposts from queens that have starred on the show and also on other social media platforms and media outlets. She is the only dog who has gotten a shout out from rupaulsdragrace instagram after we had attended the 2019 NYC dragcon. Lastly, Pickles is a performer and has performed in two drag shows as a guest performer. I Don’t know any pups who have that on their resume

What first got you interested in the drag lifestyle?

Marg: In the culture of Drag there are no rules, and anyone can be a drag King or Queen and now even a drag dog. It’s a happiness outlet for a lot of people including myself. I love watching Rupaul’s drag race, attending drag shows and creating looks for Miss Pickles. I’ve always been a creative person and Pickles is a pug who loves to wear clothes and is a fabulous model and I just randomly decided to make Pickles a Drag Pug. 2.5 years ago we made the first imitation drag look of one of our favourite drag queens Miss Vanjie and after posting it to social media it went viral. Throughout these 2.5 years so many people have messaged us how Miss Pickles brightens up their day so we continue to recreate looks.

What are the plans for celebrating the launch of the show?

Marg: When the CW Dogs of the Year special airs, we plan on  cuddling up on the couch with popcorn and stream the show on the CW website.

And any advice for people who want to make their lives more fabulous?

Throw on a wig and a cute outfit and just own the day. Don’t let anyone ruin your sparkle and if they do they aren’t worth it!

Vintage Hunting Photographs from the Early to Mid 1900s

While browsing the Toronto Archives, I came across quite a few old photographs of people hunting. The vintage hunting photographs […]

Autumn is my favourite time of year. The leaves are changing to golden yellows, bright oranges, and blazing reds. We […]