In the past four years, Canadian singer-songwriter Sean Bertram has released his debut album (The Right Place, 2018), graduated at the top of his class from Humber College’s prestigious Bachelor of Music program, released his first EP (Echo, 2021), and won “Best Pop Song in North America” in the Intercontinental Music Awards for his song “Against My Will”, all while performing countless shows across Toronto, both as a solo acoustic artist and a high-energy five-piece band. A virtuosic guitarist and stunning lyricist well beyond his years, Sean’s musical potential is only exceeded by his passion for the craft.

Sean has performed at some of Toronto’s most well-known venues, from The Horseshoe Tavern to The Rex, to Supermarket and Rivoli. His collaborations include Drew Jurecka (Billie Eilish) and Peter Letros (Beyonce, Jacksoul, Duran Duran), all before graduating from university.

Sean started learning piano at 7-years-old, picked up guitar at 10, and got started as a songwriter at just 13, writing songs that would make it to his debut album just years later. At Humber College, he honed his craft as a jazz guitar player while developing his unique musical style and delved into the world of audio engineering, proving to be adept as both a producer and mix engineer. Since then, he’s been honing his craft in a 15 x 15bedroom, finishing a new full-length album alongside a brand-new EP, both to be released before the year is out. 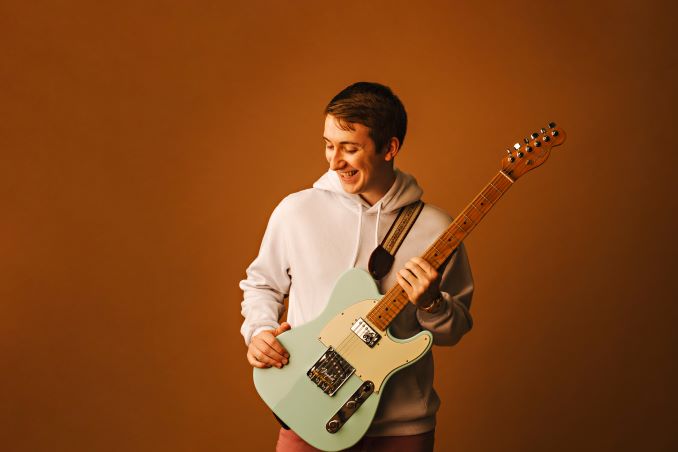 The entire album Big Wille Style by Will Smith. Especially “Candy”, it’s full of amazing puns about candy that are somehow so good, and Larry Blackmore and Cameo of all people feature on the track, it’s honestly incredible.

I just drink so much water

John’s Cottage and Pomes are both incredible and not enough people know about them.

I think it depends, I’ve heard some incredible, artful EPs lately, and some LPs that have a lot of filler, but I think I always gravitate towards LPs because you can weave a longer narrative and have more variety without sounding inconsistent. The thing about EPs is they always leave me wanting more.

Lately, I’ve been a big night owl. Late to bed, late to rise as I always say.

This past year I’ve fallen in love with production, so I’m leaning more and more towards the studio. Especially since the road currently isn’t much of an option.

Any shows or albums coming up?:
I just released my new single “Santa Barbara Pier” on the 6th, I’ve got my next single, “Angeline” coming out on August 27th, and then my sophomore album, self-titled Sean Bertram, is being released on September 17th!

Tasty Korea on Lakeshore in Etobicoke is the greatest little restaurant I’ve ever been to. Karen, the owner, is the nicest person in the world and she makes a mean bibimbap.

It used to be Queen street, because it’s got the Horseshoe and it used to have Moog Audio which was the greatest music shop, but now that that’s closed down it might have to be Church Street.

Trinity Bellwoods, in part thanks to the Daniel Caeser track

I love playing the Horseshoe, that’s a favourite, but a really great smaller place I’ve played a lot of my best shows at is C’est What on Front Street.

Roti, hands down. I don’t think I’ve ever been a big fan of the other two, but even if I was, I don’t know how they could even compare to roti.