We had the chance to talk with Samantha Ouyang, Founder of Superposition Toronto about the work they do at the organization. 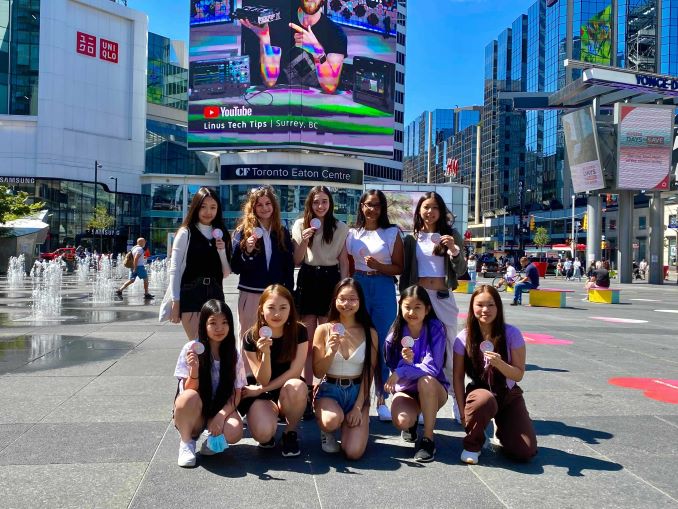 Describe your charity/non-profit in a few sentences. When did you start/join it?

Superposition Toronto is a non-profit dedicated to bridging the gender gap in STEM by creating educational opportunities and supportive communities. Founded in July 2020, they set out to change the narrative of women being left out of STEM and innovation, to create a safe space where everyone feels that they truly belong and can pursue their passions with confidence and excitement, rather than doubt.

Women make up only 23% of science and technology workers, 19% of first-year engineering undergraduates, and 16% of first-year computer science undergraduates in Canada. Though we’ve come a long way, gender minorities are still very much discouraged from pursuing STEM due to underrepresentation or discrimination. People often say, “Girls just aren’t into STEM,” but it’s important to ask why. This narrative has been carved out from traditional beliefs of masculine and feminine interests and activities, discouragement from a lack of female role models, a highly male-dominated culture within the field, and girls losing confidence early on in their lives. Diversity in STEM matters, because STEM is driving innovation for everyone on the planet. Innovation however, cannot be accomplished without a diversity in perspectives, and this lack of diversity represents a loss of talent and discovery, hindering further societal development.

What made you want to get involved? What was the situation like when you started?

In my first two years of high school, I quickly learned that my areas of interest — technology and engineering — were largely overshadowed at my school. I was frustrated by the fact that my school put so little effort into supporting them, and I felt like I couldn’t reach my full potential because of it. But what really exacerbated the issue was that those who did share my interests were all male. That lack of community made me feel lost and alone, and I struggled to find my place. While I did consider the guys to be my friends, there were numerous times where I faced prejudice from them — where they doubted my skills, discredited my achievements, and blurted out blatantly degrading comments without thinking — but I just tried to pretend they never happened. Looking back, I stayed close to the people that hurt me the most because I had no one else to go to.

For too long, I simply accepted the fact that some things were just going to remain the way they were. When my male friends took jabs at my coding skills, I just laughed with them too — I thought it was just something I was going to have to put up with. No one ever wants to call it out, because we all just want to avoid trouble and pretend that things are fine, when in reality, that’s far from the truth. I didn’t think anything could really change — but that’s because no one was actually taking action. So I took a chance last year and tried, and since then we’ve grown into Toronto’s largest student-led women in STEM non-profit and I couldn’t be more proud of what we’ve accomplished in just a year.

In just a year, we’ve reached over 33,000 individuals in 80 countries and all inhabited continents through our workshops, panels, contests, and social media. We’ve made accessible educational opportunities on STEM topics that aren’t taught in schools, such as AI, blockchain, gene editing, and bionics; built a supportive community of women in STEM; and fostered an environment for young women to build their confidence, to prove to themselves that they can do a lot more than they think.

What more needs to be done? How can our readers help?

Solving this issue definitely won’t be easy, in fact, the World Economic Forum estimates that it will take 135 years to close the gender gap. However, there are ways you can help, even if you’re male, to combat this issue from the inside out. One thing to recognize is that you can’t change the systems unless you change the people within the systems — you can’t close the gender gap without involving the majority group, a key reason to promote allyship. Becoming mentors to younger girls to encourage early participation, help build confidence, teach skills, and create a support system is one of the easiest ways to do this. It’s also important to assess your own implicit biases and privileges, participate in discussion, be an active listener, and amplify women’s voices rather than speak for them. Something we don’t believe in entirely at Superposition Toronto is pure advocacy. You can have an informative social media page talking about the issue, increasing awareness and fostering dialogue, but that doesn’t actively bring more girls into STEM. Our approach differs by equipping them with skills, hosting interactive and accessible workshops and events where they can actually learn and try their hand at these technologies, all the while establishing a welcoming community where they can meet other girls on a similar journey.

We actually just wrapped up our largest event since being founded! From Aug. 13 to 15, we hosted The SuperPOSITRON, an international all-female & non-binary virtual hackathon with 1100 signups from 63 countries. It featured 24 technical and career-building workshops and talks, 8 networking sessions, 14 fun activities with the chance to win limited edition swag bags, over $62,000 in prizes, and $600 of free tech for all attendees! We also hosted a pre-hack week called “Liftoff” from Aug. 10 to 13, with a variety of workshops that equipped them with the skills and tools you needed to build their own project, even as a complete beginner.

You can stay posted about our newest initiatives by following us on our Instagram, our website, or by joining our Discord community to network with other women in STEM! We are also active on Twitter, LinkedIn, Facebook, and TikTok.

One of our favourites has to be CryptoChicks, a non-profit based in Toronto that is committed to educating women about blockchain, cryptocurrency, and other emerging technologies like AI. They have programs in Canada, US, Russia, Pakistan, and the Bahamas and major hackathon events that are supported by large companies like Microsoft and Deloitte. We’ve partnered with them in the past to deliver workshops on blockchain and smart contracts, and love how closely our missions align, with a focus on empowering women and learning by doing.

CaribbeanTales is a registered Canadian charity that helps to eliminate racial discrimination. We spoke with Frances-Anne, Award-winning Filmmaker, Director Member […]

Not long ago we had the chance to speak with Lindsay Oughtred, Executive Director of Kids Up Front, about how […]