However you were taught sex, put that aside and be ready to watch this documentary with an open mind. A Sexplanation will have its International Premiere at the 30th Annual Inside Out Film Festival (May 27 to June 6, 2021), accessible online. Filmed in both Canada and USA, this documentary might just have you question how we learned about sex regardless of the age you may be.

A Sexplanation follows Alex Liu, a 36 year old journalist, on a quest to uncover the naked truths and hard facts about sex while on his own pursuit of discovery, fuelled by his curiosity. As the film unravels decades if not centuries of learning here in North America, Alex delves into the mindset of scientists, researchers, educators, politicians, church officials and his own parents. With humour and grit he approaches the complicated subject with a playful, yet heartfelt approach from a shame-filled past to a happier, healthier future. 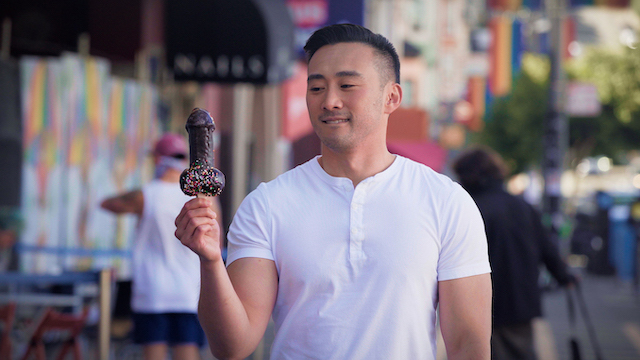 Alex explores the subject matter to help broaden our understanding of science, morality, and how to negotiate a more meaningful life. He has two YouTube channels focused on sex and drug education with over 5 million views to date. After studying molecular toxicology at UC Berkeley and Science, Health, and Environmental Reporting at New York University, he produced video, radio, and print content for NOVA ScienceNOW, CNN Health, and San Francisco NPR station KQED.

Like many of us much about what we learned about sex happened at school with a more clinical approach. Here’s the vulva. Here’s the scrotum. This is how the sperm meets the egg visuals …yada yada. We also had the toy baby lesson to scare us into believing that we’d have a screaming baby with wet diapers if we ever had sex. It worked.  We were also  shamed into believing that sex was dirty and diseases like HIV/AIDS lessons left a lasting impact on many. We were also taught that sex was sacred and should be saved for marriage —  assuming that this one person would be your partner for life. We were never taught the emotional side of sex or how to have pleasures from sex properly. Of course, if you grew up in Toronto, you might have had Sue Johanson’s help explain a little more. Who remembers Sue?

However for Alex and all this clinical learning along with identifying as gay at an early age, had him suppress his sexuality for many years. He admits he grew up with the secret that he kept and hid in shame questioning what was “normal”. “When I was 18, I thought coming out as gay would solve all my sexual problems,” said Alex. “But when I turned 30, I still felt massive amounts of shame around sex—shame that had nothing to do with being gay. So, with that as my starting point, it soon became clear that my sexual shame stemmed from poor sex education.”

Not only does the documentary offer up the mechanics and emotional side of sex it also gives us insight into scientific research happening today helping to understand the correlation between orgasms and brain matter. Alex actually agrees to have his orgasm studied in this film all in the name of scientific research.

How is an orgasm is defined? This was an interesting questions raised in the film.  Alex mentions that scientists still don’t agree on the definition of what an orgasm actually is. “As one of the most intense human experiences, it’s surprising that it hasn’t been studied much. To me, that’s like seeing the Aurora Borealis and choosing to not explore what it is. The lack of funding for sexual behavior study—an act that literally creates us—is disappointing.”

So much is packed into this documentary from an interview with a Priest with an interesting view on sex to confronting politicians to learning how an organization in San Francisco gives a safe space for any question pertaining to sex. The filmmakers also gain insight into PornHub’s most popular searches for both men and women (eye opening). The main surprise to Alex was that the search terms he was ashamed of really are quite typical. “Like, boringly so. It makes total sense now that I’ve thought about it. We’re all excited by taboo, whether it’s the books, movies, television, or porn we consume.” said Alex.

We also are witness to a family conversation between Alex and his own parents on-camera which he describes as excruciating. “I don’t think I have ever said the word erection in front of them. I just keep talking about things as I would as a friend, which might have been an overcorrection, but my parents surprised me. It brought us closer which was a nice surprised,” said Alex.

The question then is “how would you describe sex?” — one he poses to many. For him, he mentioned after all the discussions he think about sex much more broadly than he did before. “It’s about pleasurable human connections of all kinds: a pat on the back, an invigorating conversation, interactions that establish true connection. Intercourse is just one end of a very large sexual spectrum.”

How has working on this documentary changed his views on sex? Alex tells us  in an unexpected way, he considers sex much more sacred now. “My way to rebel against sexual shame as a young person was to just act on every sexual impulse without much thought. But the film really made me examine how maybe I overcorrected and ignored the spiritual aspect of sex. Sex is best when you’re connected with someone body and soul, so I take more time to establish that bond first.”

This is a great documentary absolutely worth watching. Parents and teens too! For more information about the documentary A Sexplanation and to book tickets for the online screening link here: insideout.ca

In case you miss it, you can also check asexplanation.com for future screenings and their latest news.

Pride month is for everyone. During this month of celebration and raising awareness we also have the kids on our […]