While on vacation in Goa, India, Canadian filmmaker Chris McDonell met a young 9-year old beach hawker named Shilpa whose hustle made her the focal point of the film Queen of the Beach.

At first glance, you admire her skills and see so much potential for a better future than earning mere rupees for her hard work as a child merchant. She’s charming, funny and engaging. You would want to help her too.

Having never attended school, she managed to learn enough math skills to make quick calculations as well as speaking five languages all from her “job” to keep her mysterious boss happy. If that’s not stressful enough, she is also the primary breadwinner for her family ensuring her parents and siblings have a roof over their heads and food on the table. 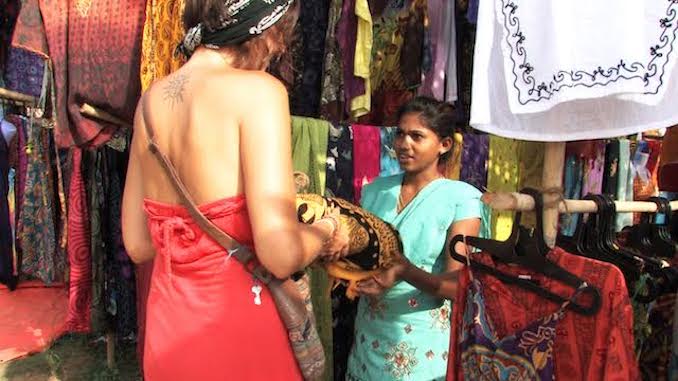 This chance encounter between McDonell and Shilpa led to Queen of the Beach winning 11 film festival awards including Best Picture and Best Documentary wins at 8 Festivals in India –now available digitally and On Demand.

It is estimated that 1.3 billion people live in the country. According to the International Labour Organization there are approximately 12.9 million children in India who are working between the ages of 7 to 17 (2015).

Goa is located on the southwestern coast of India and is rich in history with various cultures and religions planting roots here including Hindu, Muslim, and Christianity from Portuguese settlers. Goa become a popular destination with it’s 54 beaches by travelling hippies from around the world in the early 1970s. Also known as the “Hippie Trail” it become known as a hedonist’s paradise. Arambol Beach was a favourite and was often noted as one of the most beautiful beaches in India. Goa was a place where yoga, meditation and other wellness retreats were a plenty. Today, you can still experience drum circles, take in all the wellness retreats and soak in a mud bath in paradise. The birth of Goan Trance Music was a blend of electronica and Hindu music that became popular.  Visitors now can explore the natural beauty of the region by day and party all night at music festivals.

What inspired McDonell to venture to India in the first place? “Jason Bourne,” said McDonnell in a recent interview with us. “If I’m being honest, I actually didn’t know much about Goa, or even India for that matter before my first trip in 2008. But Goa was one of the exotic locales featured in the Matt Damon trilogy so that must have planted a seed.” 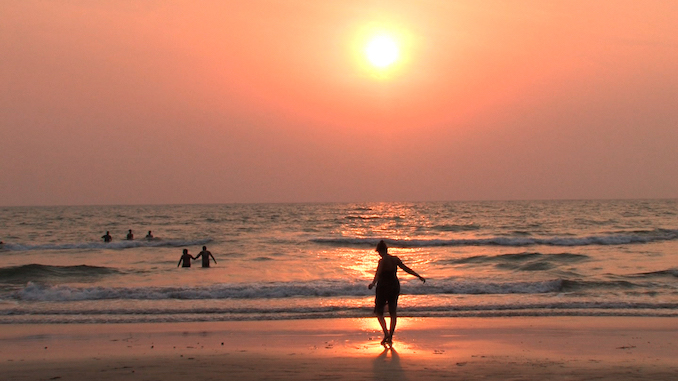 He tells us he had spent the first 28 days zigzagging the country by planes (eight of them!), trains and auto-rickshaws. “About midway through I decided to book a bit of a vacation before flying home. You might think I was already on vacation. I was in India! But I was literally working around the clock and breathing in some pretty heavy pollution. So I flipped to Goa in my trusty Lonely Planet, picked the beach that looked to be the most lively, and off I went. Anjuna Beach would end up being a sort of home-away-from-home for the next 7 years.”

When he first hit the beach, he recalls being immediately inundated with child vendors. Selling is in their DNA as it was explained in the film. Driven by superstition they believed this first sale would bring them good luck for the rest of the day and by their logic, someone like McDonell could make or break their day.

“It was actually a teenager named Alexandra who won my business,” said McDonell as he recalled on his first visit. “She led me to her shop and that’s when I met Shilpa, 9, and Seeta, 13.” From the moment he met them, he knew his “vacation” was over. The next morning, McDonell returned with his camera to film the trio in action and that’s when Shilpa started to shine. “She was funny, sharp-witted, was cracking jokes, breaking out into song, and looked like she’d been born to be in front of a camera. She was also genuinely keen to share her story. She told me she’d been working on the beach since she was 5. She told me she was the main provider for her family and that she lived off one meal a day. She told me that her dream was to go to school. And I was hooked. But just as quickly, I was back on a plane to Canada.”

McDonell had the good fortune of returning the following year to Goa. That’s when he met Shilpa’s family and learned more about her struggles, and more importantly, her resilience to overcome them… and that’s when, he says, the story took off. 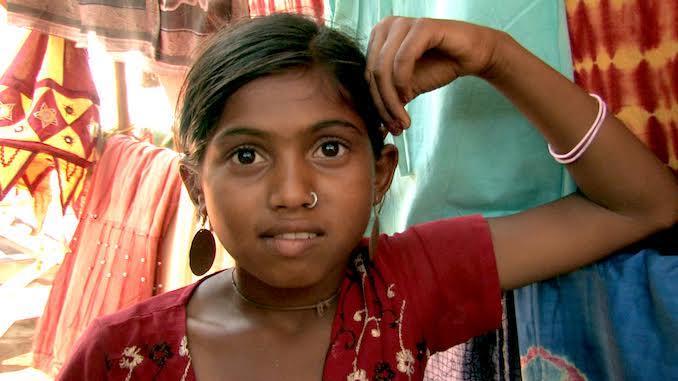 He tells us Shilpa comes from the unique Banjara people who live in remote tribal villages in the state of Karnataka. “They are migrant workers – semi-nomadic gypsies. They live life one day at a time and their mission every day is the same: to survive. The parents of Shilpa’s generation are mostly uneducated and therefore see no benefit in sending their children to school, especially if they are girls. The girls are the workers. They bring in the money, do the cooking, the cleaning, and are then married off when they’re fourteen or fifteen to be the ‘Bhabi’ (basically a maid) for their husband’s family. So this was Shilpa’s background, and here I come, trying to take her off the beach and put her in a classroom.”

But there were moments in the film where it seemed as though Shilpa and her family were taking the filmmaker for a ride. McDonell himself, wondered if he was being “outplayed”.

“There were so many layers. If Shilpa went to school, how would her family survive? Who would pay the rent? Who would put food on the table? Shilpa had 3 older sisters but 2 were already married off and one (Pooja, 16) was ‘saving for her marriage’ (i.e. a dowry to the groom). Her 14-year-old brother, Kiran, went to a private school but only because Shilpa paid for it. And “If Shilpa goes to school, I no go school,” he said to me one day. On top of that, Shilpa’s father was an alcoholic who not only didn’t work, but collected an allowance from her every day to support his habit. “This is life, Chris”, Shilpa once said to me. So… when this Canadian cameraman tried to help Shilpa with school, her family immediately seized upon the opportunity to turn my generosity into something more tangible. First they wanted me to buy them a propane stove. Then a TV. Then tiles for their kitchen floor. I couldn’t take it. I felt like these girls who had been exploited their whole lives were now trying to exploit me. And despite my best intentions – I even met with an NGO dedicated to helping children like Shilpa go to school and implored them to help, which they wanted to – I failed. I went back to Canada and thought I was done. 6 months later, I even lost contact with Shilpa and was now literally half a world away.”

After that experience, McDonell cut the film and sent it to distributors. He met with someone in Toronto who suggested he go back. So, five years after his previous visit, he went. “With zero contact, not knowing whether I’d even find Shilpa or not, that’s exactly what I did. Best decision I ever made.” said McDonell.

This time he also brought her a cellphone. Of course, curious minds wonder who’s paying the bill? We had to ask. “Haha. Everyone wonders that because our phone bills are so bloody expensive! But in India, at that time, you could “charge” your phone with minutes for a very low fee. It used to cost 1 rupee per minute (which is about the equivalent of one Canadian dollar per hour) for outgoing calls. And now with smartphone, they’re very cheap as well, and everybody has one. Kids these days would rather go without food than WhatsApp.” 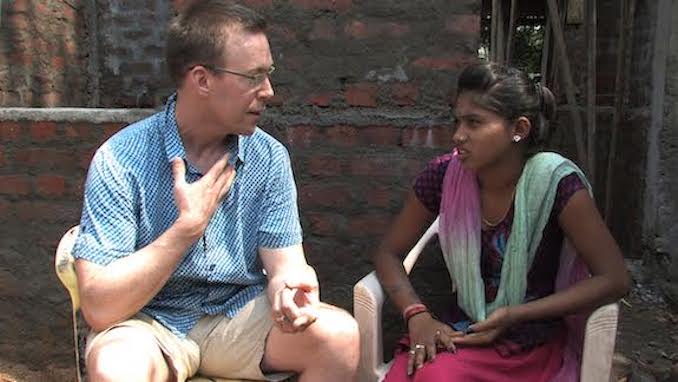 While the main mission was to help Shilpa go to school, McDonell understood that it isn’t quite the same priorities as we have here in Canada. When she was asked by the school representative what her goals were in life, she had wished that she could have an education so she could work at a mall or call-centre.

For the filmmaker, I was curious as to why he felt education was so important for her since it is sometimes viewed so differently and not like here in Canada.

“Hmm. Perhaps my biggest takeaway is that we tend to think about education as being strictly academic. At 12-years-old, Shilpa was starting to run her own business, could speak well over 5 languages, do math calculations in her head, and carry an intelligent and thought-provoking conversation with tourists from all over the world. And she had never gone to school. She literally picked up an education on the beach. That said, she still couldn’t read or write, name any planets in the solar system, or even do basic arithmetic that wasn’t associated with selling. And her prospects were stunted as a result. Education really is the key to freedom, especially in the developing world. But it doesn’t just happen in the classroom. Of course we all know this, but to live it and experience it makes it that much more real,” said McDonell.

While McDonell certainly cleared the way for Shilpa to attend school, he too had also gained from the experience. “If Shilpa taught me one thing, it’s to never give up. This is a girl who was begging at mosques when she was four, selling clothes on the beach when she was five, learning to become an entrepreneur when she was 12, and managing employees when she was 17. When her ancestral home in Karnataka collapsed, what did she do? She built a new home. For her parents. And she was 17. She’s a remarkable young lady and despite countless setbacks, she is the poster-child for utter and relentless resilience.”

So, did Shilpa end up going to school? I’ll leave that for you to see.

McDonell and Shilpa have stayed in contact over the years. The filmmaker returned to India in 2019 for her wedding. He then returned in 2020 to attend the film festivals where Queen of the Beach was screening and learned that the couple were expecting a baby. “Today, she and Vinod have a beautiful young girl named Ayra. It is Shilpa’s dream to come to Canada so she insists that the next time we meet, it must be on Canadian soil. We shall see.”

Queen of the Beach is now available On Demand and On Digital.

The region of Goa is often described as a pocket of paradise. As India’s smallest state, it’s got every ingredient […]

Rare royal treasures from Marwar-Jodhpur are now on exhibition at the Royal Ontario Museum (ROM). Treasures of a Desert Kingdom: […]