On June 29th, Google Researchers and Canadian internationally renowned artist Douglas Coupland revealed their recent collaboration, a project exploring the intersections of Artificial Intelligence and artistic expression. The project culminated in a collection of work entitled: Slogans for the Class of 2030, a curated series of 25 colourfully animated and thought-provoking statements aimed towards today’s youth. 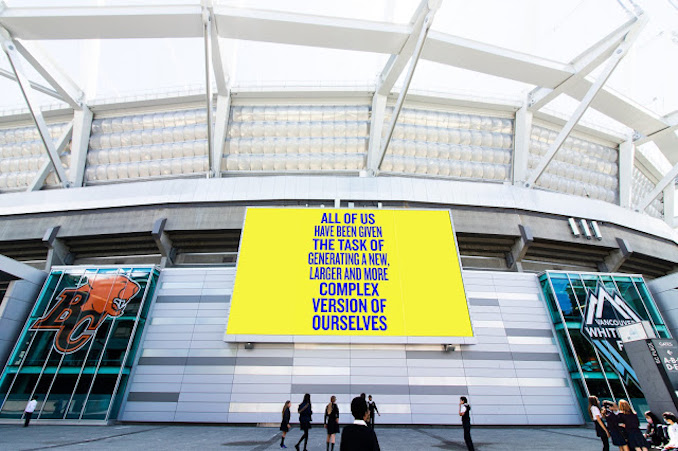 To bring this vision to life Google Researchers utilized machine learning, a technology which enables computer systems to automatically comprehend data. The first step was to introduce Coupland’s body of written work from the previous 30 years, including over 1 millions words, to the machine learning model. The Google Researchers then cultivated a specialized algorithm to familiarize the AI with Coupland’s signature style of writing. Next, to train the algorithm in compiling brief, targeted statements, social media posts gathered from the general public were added to the algorithm. Once the algorithm was primed, its job was to process and rearrange potential slogans consisting of Coupland’s previous written work to serve as the 25 Slogans for the Class of 2030.

“I would comb through “data dumps” where characters from one novel were speaking to those in other novels in ways that they might actually do. It felt like I was encountering a parallel universe of Doug”, Coupland said, explaining the almost artificial or supernatural nature of the slogans. The combinations of words and phrases, though all originally written by Coupland, were only made possible due to the algorithm’s ability to regenerate slogans and recombine words from a multitude of separate texts.

One prevailing theme throughout the body of work is an investigation of the human condition through the lens of pop culture, and specifically connecting with the condition of the younger generation. The slogan’s content and their modern design intentionally place an emphasis on the Class of 2030, as they are the first generation of young people whose lives are fully intertwined with the existence of AI.

“This project with Google’s AI division is a way of addressing this relentless phenomenon of identity-shifting that weighs heavily on the minds of most people”, Coupland said, explaining that with AI on the rise and playing an increasingly prominent role in today’s world, many may feel confusion or stress in an ever changing environment. In a dynamic world with constant technological advancement, Coupland wanted to open a door of possibility for students considering their future career paths. Through this project he aimed to spark a larger conversation about the vast possibilities in the AI field and encourage students to marry their scientific and artistic passions in the future.

Celebrating both Canadian artistic culture and the opportunity to enjoy the Summer months outdoors, multiple venues nation-wide are debuting, for a limited time, the slogans on jumbotron sized digital screens. The sites include the Terry Fox Memorial Plaza at BC Place Stadium in Vancouver, the TELUS Len Werry building in downtown Calgary, the TELUS Harbour in downtown Toronto, and Pattison digital screens throughout Canada. “Calgarians will already be familiar with the unique Douglas Coupland light display at TELUS Sky, and we jumped at the opportunity for more of our buildings to showcase the beauty of AI and art coming together, and to celebrate Douglas Couplands inspiring and captivating words” said Scott Dutchak, TELUS Vice-President of Real Estate.

“A Day in the LIfe” with Toronto author Yvonne Blackwood

Yvonne Blackwood is an award-winning short story writer, author and editor who lives in Richmond Hill. No one was more […]

Digifest is an annual conference that brings top influencers in technology, gaming, science, design, business, and education to Toronto to […]