This summer Red Bull is bringing together creativity and athletics, in a fusion known as the Red Bull Street Style World Championship. Since its launch in 2008, the competition aims to foster competition between best overall freestyle football players in the world throughout the summer, and in September, the top 16 women and 16 men compete as finalists, where the winner in each gender is crowned Red Bull Street Style World Champion. 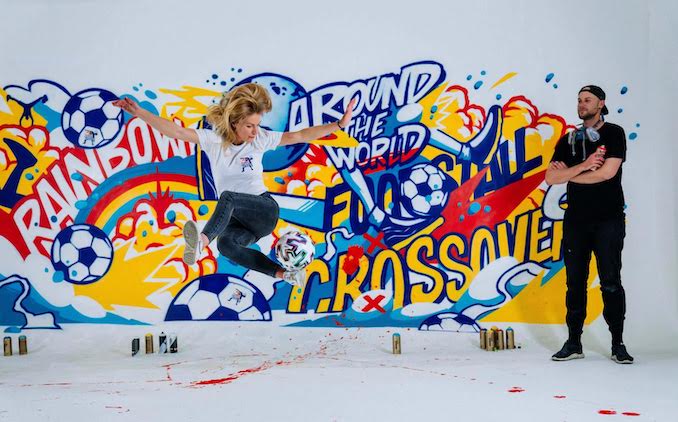 This competition and freestyle football by nature strives to encourage creativity and individuality within traditional sports, and thus judges celebrate the most creative, technical, and stylish players. Diverging from the constraints of traditional football, freestyle football focuses mainly on the performative aspect of the sport. The sport began from the practice of dribbling the ball while running forward in the circus, and over time it evolved into athletes remaining in one place and showcasing their tricks and skills. Competition takes place on a one-on-one basis as opposed to between 2 teams. “I would say freestyle football is an art, whereas football is just a sport”, one of the most well-known females in freestyle football, Aguska Mnich (2018 Red Bull Street Style winner) stated. Attesting to the accessibility of the game, Mnich also said “freestyle football is basically you and the football, we do not need coaches or money anything, what we learn is based on our motivation, determination and our goals. I invite everyone to try this beautiful sport and find yourself through this, because it’s opened a lot of doors in my life”.

Recently, imaginative illustrator and street artist Captain Kris and Aguska Mnich collaborated to design and paint a mural in East London to announce that Red Bull Street Style is back in full force with competitors from all over the world. “I think it’s really interesting, freestyle football and street art have both originated from the same place”, Captain Kris noted in reference to the overlap between the pair’s respective fields. Having come from a background of little experience in football, Captain Kris also said that being able to see the creative side of freestyle football as well as its similarity to “graffiti battles”, something that many artists may be familiar with, helped to bridge the gap between arts and athletics and acknowledge the competitive, imaginative and self-expressive aspects of the respective fields.

Through this mural the pair wanted to truly capture the energy and the movement of freestyle football, and then went on to seek a visual way to represent that. “I wanted it to have the burst and power, so we thought of including some of Aguska’s favourite tricks. Integrating football tricks, such as ‘Around the world’ and ‘Rainbow’, as a lot of my work is centred around pop art themed words, so it only felt right to include these in the football centred mural. Having her kick the ball against the wall to create paint splatters for me to work around added a whole new dimension to the mural, which is something I’ve never seen before”, Captain Kris detailed when describing the creative process of the mural. Aguska Mnich also spoke about her experience, saying, “This competition is all about showing your best personal skills, so working with Captain Kris and using our talents to create a unique art piece together with the inclusion of freestyle football tricks was so thrilling. It is something I’ve never done before, but I enjoyed using my freestyle skills to help create this artwork”.

If you are interested in showing off your freestyle football skills, enter the Red Bull Street Style World Championship for your local offline or online qualifiers. The requirements are simple: For the offline qualifiers, go to www.redbullstreetstyle.com to register and participate on location. For the online qualifier videos must be no longer than 60 seconds overall. They also must be in horizontal (landscape) format and without edits. No music is allowed. Everyone aged 16+ is welcome to compete.