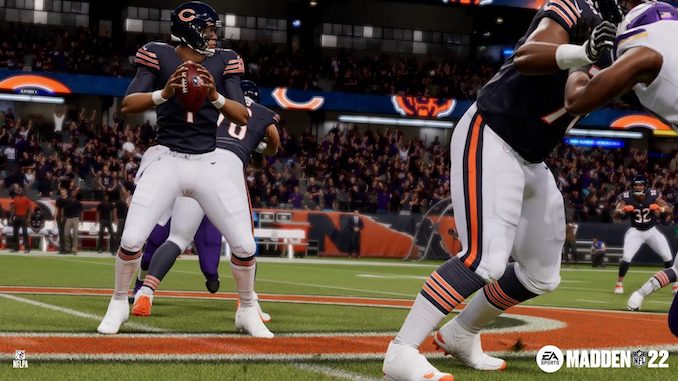 The thirty-ninth entry in the absurdly long-running sim sports series. 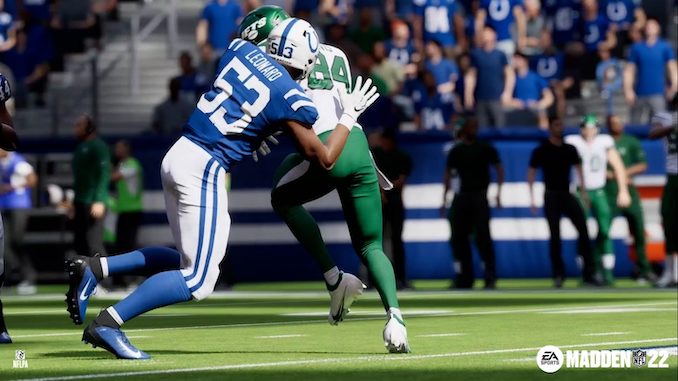 That said, my disdain has in no way interfered with my enjoyment of these sports’ digital counterparts over the years. I have fond memories of playing Sensible Soccer back on the Amiga 500, and if you put an N64 controller in my hands, I could probably recall the code for the shark-themed Team Tiburon in Madden NFL 64. It’s been a long time since I’ve dipped my toe into either waters, but with the release of Madden NFL 22 I’ve had a blast revisiting the fabled series.

Does Madden hold up after all these years? Absolutely. Does it have some weird modern trappings that may alienate players? Um, have you played a sports game lately? 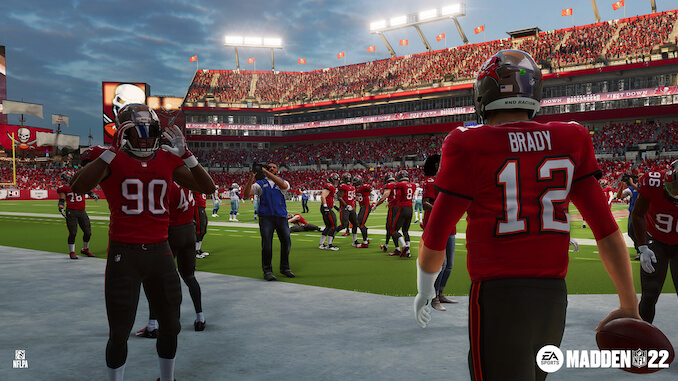 Before the original Madden, sports games were not exactly known for their fidelity to real-world sports. It was not simply a matter of hardware limitations (though that was part of it), but rather a conscious choice to strip sports down to their gameplay-friendly essence. Slamdunk-heavy basketball. Shorter soccer pitches. But also, infrequent or nonexistent licensing agreements; just see 1993’s NHLPA Hockey, starring Wayne Gretzky of the Los Angeles Hockey Team.

Madden changed all that. In 1988, Trip Hawkins, founder of Electronic Arts, set out to develop a football game that would reward those who understood the real-world sport, while welcoming those who did not. He quickly landed on John Madden, famed coach and commentator, as a creative partner: while Madden knew nothing about gaming, he knew the NFL inside and out, and he knew what he would want to see in a simulated version. Madden did not want to simply licence his name and image to EA: he insisted that he be allowed in the studio, collaborating from day one. He also insisted that Madden reflect real NFL footbal, including full eleven-a-side lineups, something with Hawkins told him was impossible, then proceeded to pull off. (For more on the genesis of Madden, check out this fantastic episode of ESPN’s 30 For 30 podcast series.)

Madden was a massive success, reversing the fortunes of EA (now one of the world’s single most valuable media companies), while changing gaming forever. Players now expected their sports games to look, and feel, like the sports they were based on, while also retaining an arcadey flow. The over-the-shoulder viewpoint, putting players closer to the action, became a standard not just for football games but other sports as well.

Madden also changed football, with a generation of players and coaches raised on Madden adopting its strategies on the real-world gridiron. Perhaps most notably, we can thank Madden for the increase in fourth-down attempts in the NFL, despite conventional wisdom calling for a punt or field goal.

TV sports, as we know them today, also owe a huge debt of gratitude to Madden. Pretty much everything about modern TV sports, from the camerawork, to the on-screen overlay, to microphone location (Madden was the first sports game to emphasize the “ground-level” noise on a sports field), can be directly linked to Madden‘s innovations. 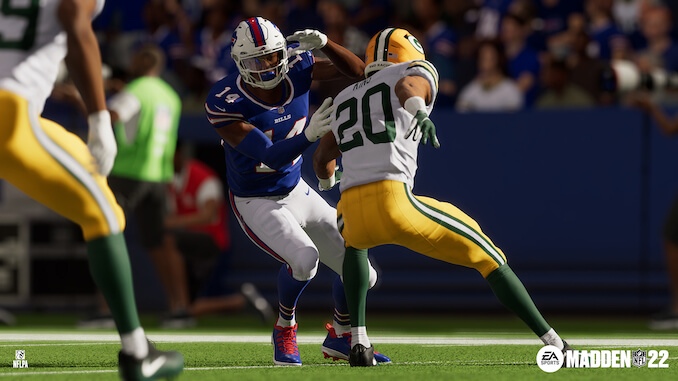 OFFSIDE, FLAG ON THE FIELD

Madden, which reinvented televised sports, has in turn learned a great deal from TV. The presentation, the camera angles, the instant replays, the dynamic commentary – it all looks, feels, and sounds just like a broadcast. The next-gen graphics, while far from realistic, only add to the sensation that you’re watching the real thing. Sometimes, from certain angles, you can almost believe it.

Madden is also a whole lot of fun. The gameplay is rock solid, and I really like how the menu of “suggested” plays are typically the ones I’d want to call myself. (Though sometimes, you just want to call a Hail Mary, and it’s a bit of a chore to navigate your coach’s menu to find it.) There’s also a wealth of modes, most of which players will never explore, but the main “MUT” (it took me forever to figure out this meant Madden Ultimate Team) is the place to be: framed as a series of challenges interspersed with a season of games, it teaches you how to play while constantly rewarding you with new stuff.

Speaking of stuff, Madden, like every sports (and every EA) game from here to eternity, is absolutely riddled with microtransactions and a confusing bevy of currencies and unlockables. Every which way you turn, you’re earning some new randomly generated thingie, whether a player, ability, in-game currency, or “booster pack”. It’s practically impossible to complete any activity without unlocking something. Which, hey, is cool – at least they’re generous. But the incessant “unlock” alerts are grating, as is the game’s efforts to funnel you towards  loot boxes which cost real-world currency. The whole microtransaction model is a travesty, preying on gamers using the same awful techniques relied on by gambling companies. I’m grateful that Madden‘s can be mostly ignored, but it’d be a better game without it entirely.

That said, Madden is really one of the finest sports games I’ve played in a while. It rewards players who love the NFL, while remaining wholly accessible to the football-averse like me. A touchdown is always satisfying, a sack more so.

Now all I want to know is, where’s my CFL game? We’re long overdue to settle that Roughriders vs. Rough Riders rivalry once and for all.

Our review of Guardians of the Galaxy, developed by Eidos Montréal (yay Canada!). Released on October 26, 2021 for PS5 […]

Our review of Saints Row, developed by Volition. Available now for PS5, PS4, Xbox X/S, Xbox One, Windows, and Stadia. […]