Our review of Wreckfest, developed by Bugbear Entertainment. Available Now For PS5 (Reviewed), PS4, Xbox One, and Windows. 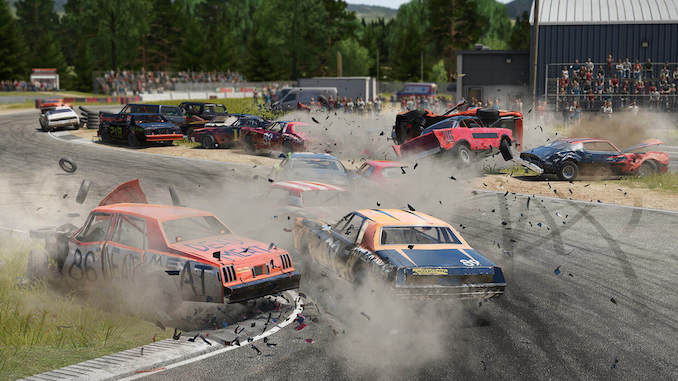 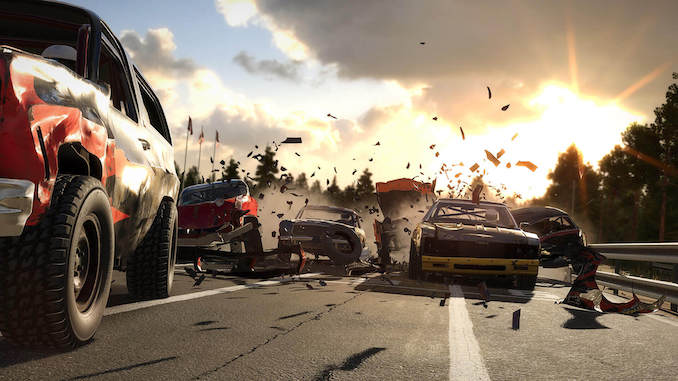 Swedish studio Bugbear is known for one thing, and one thing only: ridiculously over-the-top yet passably realistic demolition derby sims. Bugbear made a name for itself with the PS2-era FlatOut series, which now returns, sporting a different name and fancy new graphics, for next-gen consoles. Like its forebears, Wreckfest is a celebration of all things smashy smashy, handing players a fleet of rally cars, stock cars, schoolbuses, semis, tractors, um, sofas(?!), and a whole lot more. None of the vehicles are licensed, but that’s perhaps understandable – since the original Gran Turismo, manufacturers have been hesitant about letting their beauties get blown to pieces in spectacular fashion, which, y’know, is precisely Wreckfest‘s stock-in-trade.

To be clear, Wreckfest is not Burnout, its sort-of sister series that specializes in fast cars and ultra-slow-motion crashes. Wreckfest is also not Mario Kart, though it shares some of that game’s DNA. Instead, it’s a celebration of all things demolition, though toned down to a plausible physics system and with a fleet of cars that (wink wink) sure do look an awful lot like the brands Bugbear wasn’t allowed to use. 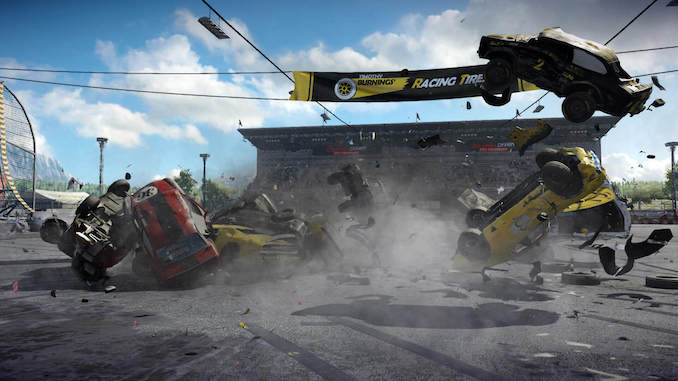 Open up Wreckfest and the first thing you’ll come across is a confusing jumble of menus, showcasing traditional demo derbies, races, and themed events like tractor races or the aforementioned “rideable sofa” circuits. There are dozens of events to unlock, though it’s not always clear what’s next, what the event contains, or the criteria for unlocking. Indeed, there are still a few races that I haven’t been able to access, and the game hasn’t bothered to inform me why.

Anyway, it doesn’t matter too much. Hopping about menu items until you find something that sounds appealing, Wreckfest is quick to throw you into the good stuff (very quickly, thanks to the PS5’s lightning fast load times). Before long, you’ll be racing through absurdly dangerous figure-eight tracks while a giant Caterpillar-style tractor chases after you, or smashing stock cars in one of the more traditional derby modes. The physics system is robust, quasi-realistic, and yet over-the-top where it needs to be. There’s nothing funnier than zipping around in a Chevrolet Stingray look-alike with its entire hood squished up, the once-sleek vehicle now more akin to a cube on wheels. 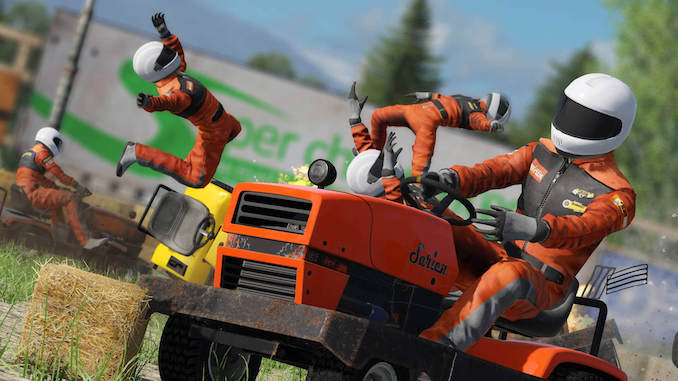 Wreckfest shines brightest in its racing modes, where every gamer’s instinct to smash enemies off the road and into barriers is rewarded, instead of penalized as it might be in something like Gran Turismo. It never gets old flinging yourself into the side of the first-place car, bumping it out of position and taking the lead. It’s hilariously cheap and unfair, and that’s the point.

Wreckfest‘s “pure” demolition modes are less exciting, and wear out their welcome pretty quickly. There are only so many times you can zoom around a big open ring with fifteen other cars, crashing into them bumper-car style until you’re the last one standing, before it gets old. These modes work better in multiplayer, though even then you’ll wish you had access to, say, a banana peel or a red shell to make things more interesting. All told, you’re less likely to return to the derby than to the races where demolition is just part of your broader strategy. 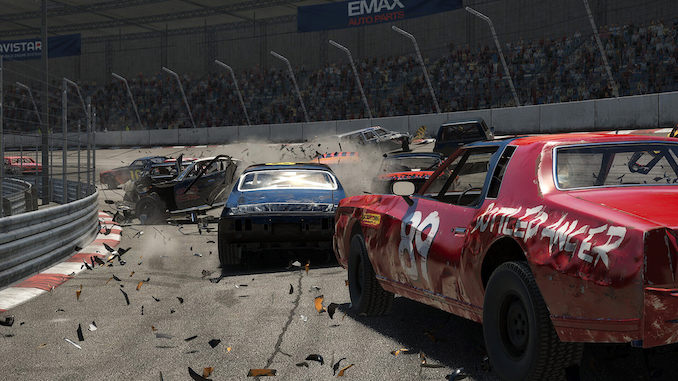 Wreckfest delivers exactly what’s on the cover: big dumb cars in big dumb crashes with a big dumb physics system. I wish its convoluted menus were a bit more accessible – and the truly dreadful soundtrack leaves a lot to be desired, though thankfully you can turn it off – but on the whole it’s a smashing good time. I especially like how, thanks to modern graphics capabilities, all the wreckage remains permanently strewn on the track. It’s cool on the fifth lap to come across your broken fender that fell off in the first.

Now if you’ll pardon me, I have a chesterfield to strap into and I need to make sure the brakes are in working order.