Set on Fogo Island off the coast of Newfoundland, Dropstones, directed, produced, edited and shot by award-winning filmmaker Caitlin Durlak, is an intimate family portrait that follows a matriarch, Sonya, shortly after she has returned to the home she once yearned to escape. As Sonya raises her two young sons, Luke and Sean, she finds herself drawing on her island’s traditions to meet the challenges of motherhood. Set against the changing seasons over the course of a year, the film immerses us in the unique rhythms of life on Fogo Island, illuminating both the hardship and fulfillment that come with calling this singular place home. Dropstones is slated to premiere in the Canadian Spectrum competition at this year’s Hot Docs Canadian International Documentary Festival, North America’s largest documentary festival. 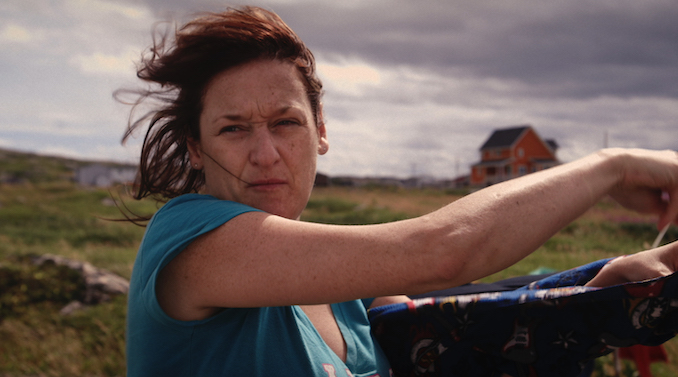 We checked in with Caitlin recently to learn more about her upcoming film.

Fogo Island is on the outskirts of our country and can feel very isolated, yet everyone who’s visited has a sense of connection. How about you — what drew you to the island?

Caitlin: Such a great question. You’re right; it’s common to hear from people who have visited there that they feel at home or a sense of belonging even though the environment might be quite different from what you or I may call home. I think a lot of that has to do with the people and how welcoming they are. There is no sense of insider vs. outsider. The islanders are so genuinely proud of where they come from, and they want to share that with you. Also, I think there is a sense of confidence that comes from living in this unique place, that many exude, and that confidence is passed along to visitors. I was instantly drawn to the place when I saw the island for the first time in short films by the National Film Board, and then by chance, years later, a friend of mine started working at the Fogo Island Inn and asked if I would come for a few weeks to work with him. I didn’t hesitate to answer yes.

What inspired you to tell Sonya’s story?

Caitlin: I had the pleasure of working with Sonya at the Inn as a server in the restaurant. She is such a charismatic person; every guest who stayed at the Inn gravitated towards her. I would watch her very naturally and, without intention, seduce guests night after night. She is a very straightforward person, loves her home, and has some of the best stories you’ve ever heard. As we became friends, she shared with me stories about what her life was like, the actuality of being a woman on the island, and a single mother at that. I was fascinated. Any filmmaker who met her would want to bottle her up! Yet every filmmaker who had come to the island up to that point had focused their lens on the men and the fishing industry. I wanted to show something else and express through film some of what Sonya shared with me. To be exact, what life on the island is like for the women and children who call it home.

Fogo Island experiences seven seasons — do you have a  favourite season? Did you face any production challenges from mother nature?

Caitlin: I would have to say that early fall is my favourite season (although it is hard to pick as they each have their beauty.) The berries are in full swing, mushrooms are fruiting, and the subtle colour changes in the foliage are stunning. I did face a few challenges during production. Most days were extremely windy, and the tripod I brought could have been a little sturdier. In the winter, I had one harrowing drive-through white-outs that I have never told in great detail to anyone, as I should not have been on the road that day. I was snowed in at Sonya’s house for almost a week, which luckily made for some great footage as I was there at all times of the day, living with them.

Resilience is often used to describe those who were born and raised there. What was your experience while filming there?

Caitlin: Many of the adults you speak to who were raised on the island can remember a time when there were no cars, or when there was no electricity and wood was running low mid-winter or stories of going overboard on a boat and not knowing how to swim. Modernity as we know it came to Fogo Island many, many years after the major cities in Canada. And that resilient nature that came with living through tough times, like challenging weather or limited contact with the outside world, has been passed down to every child that grows up there. It’s like their forefathers’ history is in their blood, and they can rely on it when times are hard. Of course, now every home has internet, video games, and all the other luxuries we are used to, but that separation from the mainland does consciously affect you. There is a sense of always making it on your own and having a community around you who will support you. Perhaps that sounds a little ‘fluffy,’ but that’s what I experienced.

Dropstones premieres at the 2021 Hot Docs Canadian International Festival on April 29. The Festival will be streamed online. Visit hotdocs.ca for more details.

About Caitlin Durlak:
Caitlin Durlak is an award-winning Canadian filmmaker whose non-fiction work has spanned many different mediums, including web series, short film, feature film and VR storytelling. Her short film, Persistence of Vision, premiered at the 2015 Images Festival where it won prizes for best local film and best student film, and was also awarded Best Short Film at the Air Canada En Route Film Festival. Durlak is an MFA graduate of Ryerson University’s Documentary Media program, alumni of Hot Docs’ Doc Accelerator Emerging Filmmaker Lab and the RIDM Talent Lab. In addition to directing, Durlak produced her first feature-length documentary, Mermaids, directed by Ali Weinstein, which was made in association with the Super Channel and premiered at Hot Docs in 2017. Dropstones is Durlak’s mid- length directorial debut, on which she was also the producer, cinematographer and editor.

Where to fuel your mind, body and soul this winter in Toronto

Wintertime in this city is full of things to do and while some of us enjoy hitting the slopes, skating […]