Luke Cyrus Hunter spent years playing music with his close friends Wayne Bond and Jason Walsh in their band “Stereola”.  They performed around Kitchener-Waterloo and the surrounding area and released one album “Night Music” in 2009. It was in this band that Luke developed his unique multifaceted style of playing keyboards.  He would play keyboard bass with his left hand, while his right hand would play another keyboard like organ, or electric piano. At the same time that he was doing this, he was also singing.  As you can imagine, it is not an easy thing to do. Having spent many hours jamming with his friends, Luke was able to solidify this demanding approach. Some notable keyboard players who played left hand bass include Ray Manzarek from “The Doors”, and Keith Emerson. 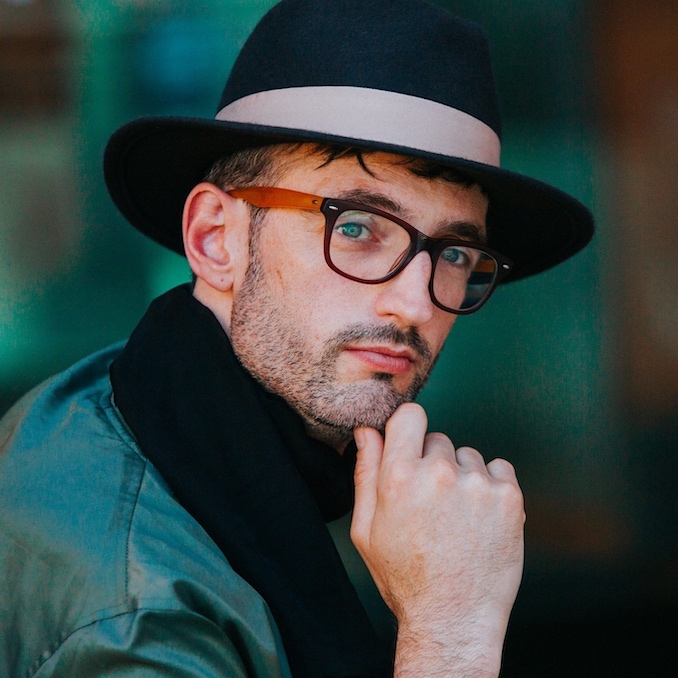 Years later now, Luke and Wayne are still creating music together.  Wayne Bond plays drums and engineers while Luke composes the songs and sings lead and backing vocals.  Luke also often plays all the other instruments on their recordings. “Old School Jam” features Wayne on drums, and Luke on vocals, keyboard bass, a mix of vintage and modern keyboards, as well as guitar.  When performing live, Luke is thankful when he has other musicians to help him bring his songs to life. The music is upbeat and fun. It’s a mixture of many different styles and sounds, and when put together, the results are buoyant, heavy on groove, densely layered and sophisticated.  Luke Cyrus Hunter’s voice is thick and rich. One can hear the vocal influence and songwriting style of David Bowie, David Byrne, and at times Frank Zappa. What do all these artists have in common? None of them could be placed in one box musically. Hunter has the same tendency to explore sounds and rhythms in a way that creates music that pulls you into a magical world of bright colours and imagination.

PYT- Michael Jackson. It’s a great song, but totally not PC to say you like it anymore

I like to do some push-ups and jump around a bit to get my blood pumping, and to ease any jitters. I also always try to do some vocal warm-ups.

The Celebration Army. I’m an old friend of the drummer. The band rocks!

Sneaky Dees nachos are a must.

Old School Jam is my latest single release, and I will have more singles coming out soon, leading to an album release in the fall.

I will be playing Aug 1st at Maxwell’s in Waterloo, and September 7th at the Cameron House.

Born in Toronto, Ontario, NDAI is making a name for herself. The R&B artist’s distinct, soothing and ethereal voice is […]