If you could create an immortal version of yourself, would you? Local filmmaker Ann Shin explores the latest advancements in AI, robotics and biotech with visionaries who argue for a new age of post-biological life. Drawing inspiration from her own life and her father’s memory loss, Ann speaks with experts in the field who suggest AI can enable us to live forever. A.rtifical I.mmortality will have its World Premiere as the Opening Film at this year’s Hot Docs Canadian International Film Festival.

In this film, Shin wanted to take people on a journey they could relate to, “so they could get an intimate understanding of what makes us humans tick, and how A.I. may or may not help us. Whether we’re young or whether we’re old and forgetful. I hope people come away with a deeper appreciation of what it is to be human. Often people feel intimidated by A.I. and powerless to alter the course of technological progress. But we can have an impact on how governments and corporations develop A.I. and advocate for more sustainable and decentralized approaches,” said Shin. 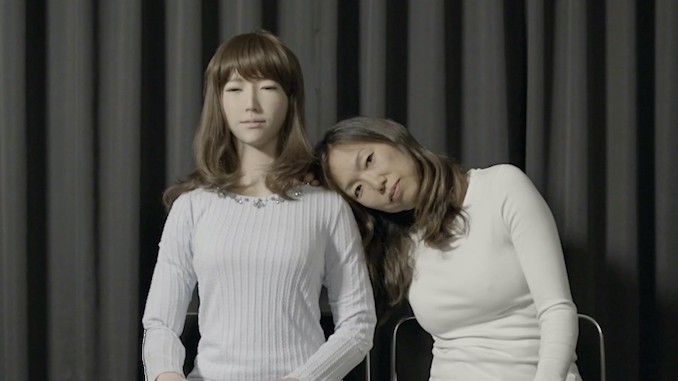 We had the opportunity to chat with filmmaker Ann Shin to learn more.

What inspired you to make this film?

Ann: A few years ago, I realized my father was losing his memory. It wasn’t just names and people, he forgot my mother entirely–the woman he shared his life with for more than 50 years.  I started wondering what it is that makes you, you. And is there a way to retain your sense of self even as you lose your faculties?

I talked with AI scientists and transhumanists who say that not only are we quantifiable, we are replicable. Our memories, our personality, even our intuition can be replicated; and what’s more, we can replicate human organs. We can clone so much of ourselves, it’s terrifying. This is not science fiction, it’s science fact. I had to find out more.

What do you find the most fascinating about how technology is moving forward?

Ann: I’m fascinated by how humans are obsessed with replicating ourselves. Over centuries we’ve created likenesses of ourselves in the form of paintings, photographs, film and VR. Now computer scientists have developed machine learning algorithms that replicate human neural networks, as well as more nuanced human attributes like emotions. We’re at a point where we can create clones of ourselves, and I want to ask why?

What is concerning to you when it comes to Artificial Intelligence?

Ann: The pace of progress in AI technology is frightening. AI is advancing at exponential rates, and now, with brain chips like that of Neuralink, humans are merging with AI. We don’t understand the possible risks and the ethical implications. Imagine someone hacking into your brain. Imagine a society where those at the top are merged with AI and others become part of an ever-broadening underclass. Everyone from Nick Bostrom to Elon Musk have raised their concern about how we are hurtling forward with AI technology. It’s like we’re driving a new car, so distracted by the new dashboard and lights, that we don’t have our eyes on the road let alone the horizon ahead!

We found it interesting that Deepak Chopra, who is always about being present, would be interested in a digital version of himself. Did that surprise you?

Ann: I was very surprised by it too! But I realize Deepak is an early adopter and he sees technology as part of human evolution. He sees Digital Deepak as an extension of himself, and hopes his AI avatar will be around for the grandkids of his grandkids – to be able to impart his experiences to them, and also to learn from them.

The documentary also has us thinking a lot about human evolution and technology. Has that changed the way you view on social media platforms like Facebook?

Ann: Yes! Platforms like Facebook, Instagram and even Google and Amazon have so much data about our habits, they have complete profiles about who we are, and perhaps know us better than we know ourselves. It’s important for us to advocate for stricter regulation around the collection and use of our data. And it’s also important to support sustainable, decentralized approaches to A.I., like Singularity.net and platforms that encrypt your data.

When you first saw your own avatar, what went through your mind?

Ann: I was creeped out! It was strange to see my mirror image, moving and looking around all on its own, speaking about my life experiences in first person. It was a weird feeling of disembodiment.

After creating this documentary would you want artificial immortality?

Ann: Before making the film, if I was presented with the choice to either die, or to ‘upload’ myself, I would have chosen to die. But now having made this film, I think I’d choose to upload myself!

A.rtificial I.mmortality will have its World Premiere at the Hot Docs Canadian International Film Festival as the Opening Film. For more information about this film (screening online) and others, visit www.hotdocs.ca

Also worth noting is Ann Shin’s debut novel that just hit the bookshelves earlier this month. The Last Exiles about Suja, a young journalist from a prominent family and Jin who’s from a small village. The two meet while studying at university in Pyongyang. However outside the school, North Korea has fallen under great upheaval. Jin returns home only to discover his family is starving. He makes decision that will haunt him for the rest of his life. Meanwhile, miles away, Suja has begun to feel the tenuousness of her privilege when she learns that Jin has disappeared. Risking everything, and defying her family, Suja sets out to find him, embarking on a dangerous journey that leads her into a dark criminal underbelly and tests their love and will to survive. Shin offers readers a glimpse of life behind the guarded walls and the experiences of those who dare to attempt to escape. The Last Exiles was inspired by real stories.

Hot Docs takes us to breathtaking heights in “MOUNTAIN”

What is it about the mountains around the world that draw us to them? For me, they serve as reminders […]

The Pug Life and Toronto’s own
Miss Pickles

What is it about Pugs that so many people adore? Their smushy faces? Their compact size? Their quirky personalities? Pugly: […]