On Friday, January 3rd, 2020, American conservative writer and commentator turned conspiracy theorist Dinesh D’Souza announced that he will take part in an event at the Danforth Music Hall in Toronto on May 4th, 2020.

In his words, the event is to “…debate Lawrence Krauss on God, Donald Trump, America and more!” 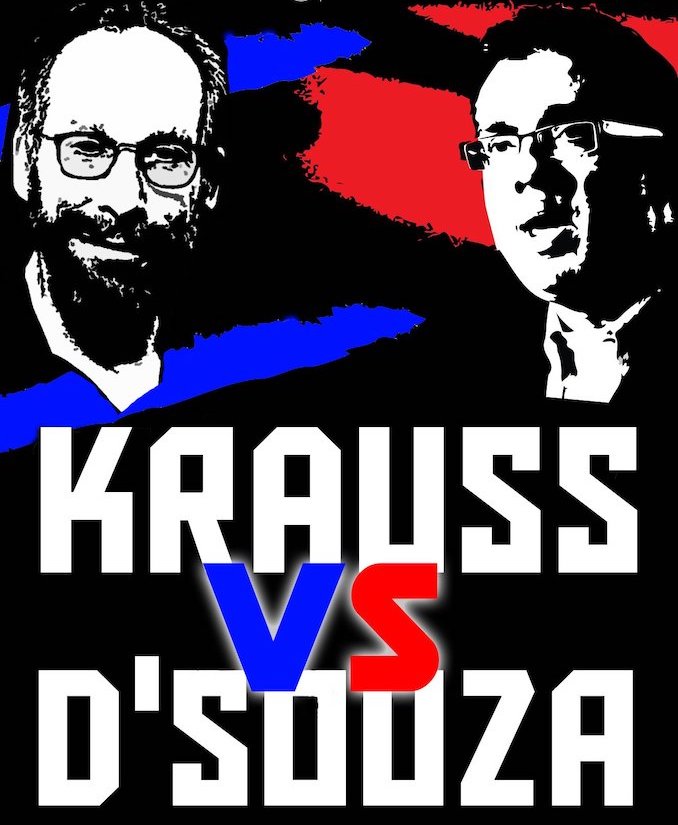 Lawrence Krauss is a Toronto native, a theoretical physicist and cosmologist with a history that includes teaching at Arizona State University, Yale University, and Case Western Reserve University. He is an advocate for public understanding of science, public policy based on sound empirical data, scientific skepticism, and science education.

After the announcement on Twitter by D’Souza, Kraus quote tweeted a response of what he interpreted the event to be about.

“Just to make it clear. This will not be a debate, but a dialogue.. hopefully civilized discussion on the issues mentioned below and more.. about much of which we may disagree. But the format will not involve a rhetorical debate.”

Just to make it clear. This will not be a debate, but a dialogue.. hopefully a civilized discussion on the issues mentioned below and more.. about much of which we may disagree. But the format will not involve a rhetorical debate. https://t.co/AWZnYEUrUy

D’Souza has faced a ton of criticism over the years for his crimes, conspiracies and inciteful speech. His follies are too many to fully cover but here are just a few.

He was called a “conservative troll” and a ‘conspiracy-minded felon” by Dylan Matthews for VOX in an article that explains the man’s history.

In an article for The Atlantic entitled “Dinesh D’Souza and the Decline of Conservatism”, David Frum, who has known Dinesh D’Souza for decades, said he is “…always enjoying the part of the polemicist and the provocateur…” In that article, Frum mentions the success Dinesh has received from his films and books, all of which have shocking distortions of reality and history in relation to the Tulsa Riot of 1921, the democratic and republican parties and slavery/racism, and the cultural left being responsible for 9/11.

Trump Jr. hosted a screening of D’Souza’s film Death of a Nation and later summarized the film like this.

“You see the Nazi platform in the early 1930s and what was actually put out there … and you look at it compared to, like, the DNC platform of today, and you’re saying, man, those things are awfully similar, to a point where it’s actually scary.”

Dinesh D’Souza plead guilty to a reduced single count of fraud in 2014 for crimes involved with  making $20,000 in illegal contributions in the names of others when he donated to the New York Senate campaign of Wendy Long. He was sentenced to five years’ probation, eight months in a halfway house and was ordered to pay a $30,000 fine. In 2018, President Donald Trump granted D’Souza a pardon.

D’Souza perceived the prosecution as a politically motivated witch hunt which he talks about in his video called “Hillary’s America”, a film in which he also tries to align the current Democratic party with the Ku Klux Klan and slaveowners.

He constantly makes remarks aiming to provoke reactions from people, often with racist undertones. Many at Obama.

YOU CAN TAKE THE BOY OUT OF THE GHETTO…Watch this vulgar man show his stuff, while America cowers in embarrassment pic.twitter.com/C9yLG4QoOK

“Wondering why I pardoned all those drug offenders, are you?” pic.twitter.com/2jozA7Jnbn

When in mail bombs were sent out to various targets in the US in 2018, he pushed the narrative that it was all a hoax.

Dinesh D’Souza spread and continues to spread the unproven claim that U.S. politician Ilhan Omar married her brother to get a greencard.

I’m trying to keep the @IlhanMN story straight. She marrried her brother to evade immigration laws? Then she divorced him and illicitly filed joint tax returns with another guy years before they were married? I was prosecuted for doing far less; why hasn’t she been indicted yet?

On The Ingraham Angle with Fox News Host Laura Ingraham, D’Souza said that an unbiased observer would believe that Ilhan Omar seems to support the perpetrators of 9/11 more than the victims.

Dinesh D’Souza: A “reasonable person … would not be able to tell if [Rep. Ilhan Omar] was on the side of the victims of 9/11 or the perpetrators” pic.twitter.com/CN5vf3kjGe

He minimized the impact of Rosa Parks.

OVERRATED DEMOCRATS DEPT: So Rosa Parks wouldn’t sit in the back of the bus–that’s all she did, so what’s the big fuss?

When student activists who survived the Parkland, Florida school shooting had a gun reform bill they had fought for get voted down, D’Souza mocked their disappointment on Twitter. He later apologized.

Worst news since their parents told them to get summer jobs https://t.co/Vg3mXYvb4c

Despite his transgressions and his past felony conviction, Dinesh D’Souza is meant to appear at The Danforth Music hall for a conversation with Lawrence Krauss.

The trip will call into question whether or not a convicted felon should be admitted into Canada after receiving a pardon by the President of the United States.

If so, what are the limits in allowing convicted felons who have been granted a presidential pardon?

Would we also allow disgraced Navy Seal Eddie Gallagher who was described as “toxic” and who was “OK with killing anything that moved”. Gallagher is often referred to as a war criminal and was also pardoned by Trump.

Dinesh D’Souza is most certainly not a war criminal, but he is dangerous. Should he be allowed to normalize his behaviour and conspiracies with the validation that comes with having a large event at The Danforth Music Hall in Toronto, Canada, opposite a man of science?

Maybe people need to see him try to hold his theories to the fire.

The Arkells have released their brand new album High Noon, which is their best to date. I must say, I’m very […]

Chillin’ on Sugar Beach with 102.1 the Edge’s Josie Dye