Cherub Whiting is the 22nd century equivalent of a public defender—she helps people whose virtual reality posting habits have tanked their popularity, making them ineligible for work. A hardworking do-gooder who believes whole-heartedly in rehabilitating the earth’s environment and every lost soul on it, she jumps to take a case amid the greentowers of a city she’s only visited in gaming sims… Paris!

But Rubi’s new client, Luciano Pox, isn’t just another soapboxing misfit, spouting conspiracy theories about the social capital economy. He’s not even criminal naysayer #hating on humanity’s ongoing effort to roll back carbon levels back from their earth-frying heights. And when the beleaguered Pox skips their face to face consult in Paris, someone else shows up in his stead: an @Interpol strike team, complete with an autonomous gun platform, a full flight of forensic camera drones, and an in-the-flesh career police detective!

Rubi’s not about to let her client get railroaded. To rate this much police attention, Pox must be suspected of something very serious indeed: hacking VR networks, resource hoarding, or possibly even harbouring artificially intelligent beings. A terrorist attack in Paris by anti-rationing Freebreeders and an Atlantic hurricane cluster don’t help matters, but nothing can shake her conviction that the man she represents desperately needs help, not incarceration.

The race to unlock the mystery that is Luce Pox takes Rubi, her longtime gaming nemesis and @Interpol from Paris to London and Miami. The chase culminates in a winner-take-all battle in the plastic-wrapped ruins of Manhattan, for a prize that might tip Earth back into ecological viability, or forever doom humanity’s hard-fought walkback from the brink of disaster.

Fast-paced and inventive, Gamechanger throws readers in to a future that envisions the best and worst of current global trends, offering fresh visions of the coming century and the generation working, even now, to build it. 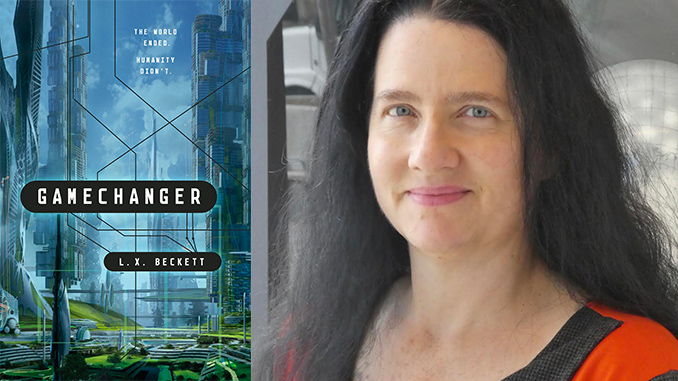 Toronto author and editor L.X. Beckett frittered their misbegotten youth working as an actor and theatre technician in Southern Alberta before deciding to make a shift into science fiction. Their first novella, “Freezing Rain, a Chance of Falling,” appeared in the July/August issue of the Magazine of Fantasy and Science Fiction in 2018, and takes place in the same universe as their upcoming 2019 novel Gamechanger. Lex identifies as feminist, lesbian, genderqueer, married and Slytherin, and can be found on Twitter at @LXBeckett or at the Lexicon, http://lxbeckett.com.

L.X. Beckett will be appearing at The Word On The Street Toronto’s 30th Anniversary festival this September. Visit their website for more  thewordonthestreet.ca/Toronto.

“A Day in the Life” with Canadian author Najwa Zebian

A Lebanese-Canadian activist, author, speaker, and educator, Najwa Zebian is one of the most recognizable names in poetry today. With a passion […]

“A Day in the LIfe” with Toronto author Yvonne Blackwood

Yvonne Blackwood is an award-winning short story writer, author and editor who lives in Richmond Hill. No one was more […]

“A Day in the Life” with Toronto Author, Audio Producer Michelle Parise

The mind of Michelle Parise is a palace overflowing with “little things”. When I first met her, we were both […]