I never thought I would be the type to throw a punch. A boxing workout looks so cool but never would I have ever thought it would be something for this lightweight. A preview class at the new UNDRCARD studio and well, several jabs and hooks later I AM ALL IN.

UNDRCARD is a total body workout in a group boxing setting …with a beat. With the first location in Calgary, the successful fitness studio has now landed in Toronto. A third location is set to open later this fall in Vancouver.  Co-founder Joanna “Magik” Majcherkiewicz tells us UNDRCARD has a clear vision of what and who they want to be. Authenticity is important to them from a boxing history not only with the trainers with athletic and boxing backgrounds leading the classes but also the mentality of “working for it” and “fighting for it” with that champion mentality.

Part of the reason why UNDRCARD formed was to break down barriers and allow people to take in the benefits of the sport and techniques without feeling intimidated.

“We wanted people to feel that champion mentality and take that feeling into their daily lives,” said Majcherkiewicz. “We want people to feel good, feel strong, both mentally and physically, and feel ready to tackle life and what’s thrown at you on a daily basis.” 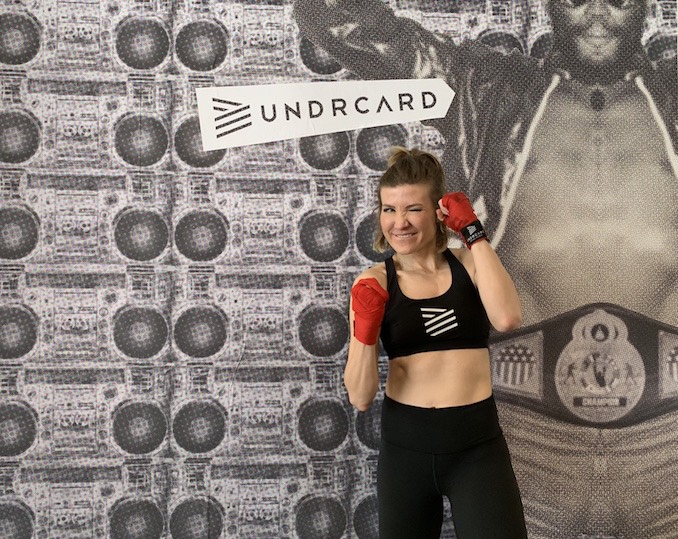 UNDRCARD is also about the people who dedicated their lives to the craft of boxing. The staff includes athletes and trainers who work with boxers and fighters. The mentality here is that ultimately the main event is your life and what matters to you also outside of the studio.

“There are so many analogies between life and boxing. If you think about all the lingo that is used day to day like ‘saved by the bell’ or ‘throw in the towel’ for example, so many come from boxing,” says Majcherkiewicz.

And others we’ve found other everyday sayings that originated from boxing: roll with the punches, low blow, throw your hat in the ring, groggy…so many!

We’ve all heard the famous Muhammad Ali saying “Float like a butterfly, sting like a bee.” In boxing, Majcherkiewicz tells us it’s very much that. It’s not just about throwing punches —  there is a bit of dance movement and choreography involved.  Every step and jab that’s taught flows into the next movement.

Majcherkiewicz tells us the classes are a great way to develop lean muscle mass, work your cardio as well as your strength. “People are so surprised at how much it works your core, your booty, and people get really cut abs. Would you ever do a 1000 squats in your house? No. You do so many squats and crunches in this very uplifting environment that’s triggered also by the music which makes you want to work longer and harder.”

UNDRCARD is also committed to arts and culture. Inspiration comes not only from the instructors but also through music. Playlists are curated by the trainers (btw Majcherkiewicz is also a DJ – check out JoannaMagik on Spotify) to motivate and the space is very art focused to do the same.

The studio itself is darkly lit with 30+ punching bags. No need to worry about being judged — here you just focus on the instructor and learning the movements.  But if you’re super self-conscious there are what they call “secret bags” that are tucked into corners.  Strobe lights controlled by the instructor helps to keep the group moving along with the incredible playlist. No Eye of the Tiger or theme from Rocky in our class! 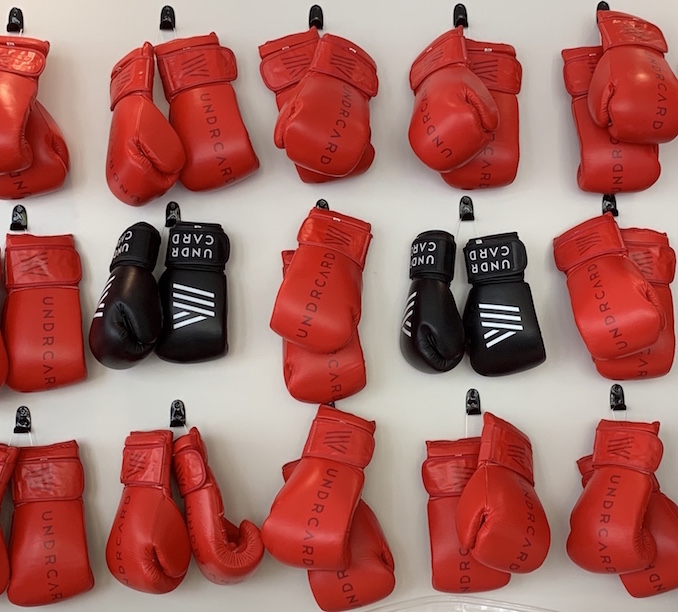 You’ll also find a boxing ring in the studio that will be used for private training, footwork training, padded training, and technical boxing.

Classes are available for adults currently but the studio will roll out programs for kids and teens coming this fall. It’s a great sport for kids as they learn proper techniques, respect, get humbled, and even learn how to avoid fights.

After one class with “Joanna Magik” and I’m feeling a little more fierce and ready to conquer the world. 24 hours later and my abs are tender and my legs are jelly. No coffee needed. My energy level is still high. Okay, I may have even sworn a little more than average during the day, too.

Is it us, or has Winterlicious returned with more excitement over the past couple of years? It’s become a reason […]

Pōpa brings the rich flavours of Burma, Bali and Macau to Toronto

Internationally acclaimed contemporary artist, Rubem Robierb opens his solo exhibition at Taglialatella Galleries in Yorkville this week. METAMORPHOSIS, is a […]