Our review of Call of Duty: Black Ops IIII (yes, that’s IIII not IV), developed by Treyarch. Released on October 12, 2018 for PlayStation 4 (reviewed), Microsoft Windows, and Xbox One. 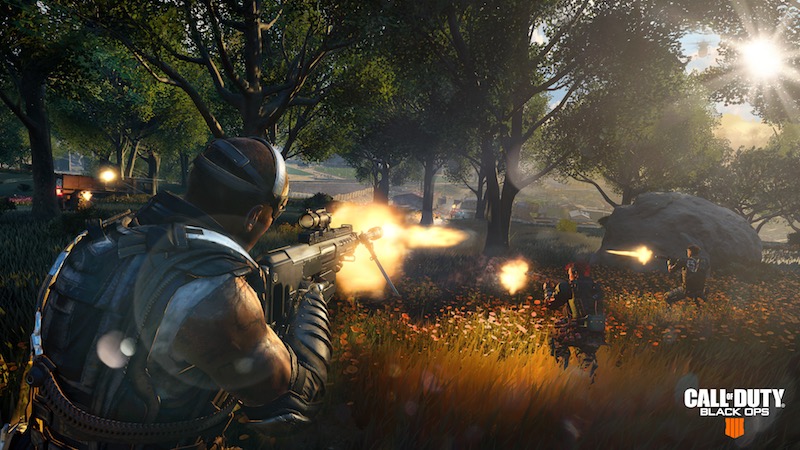 Teenagers. Ones with headsets and lots of free time on their hands. 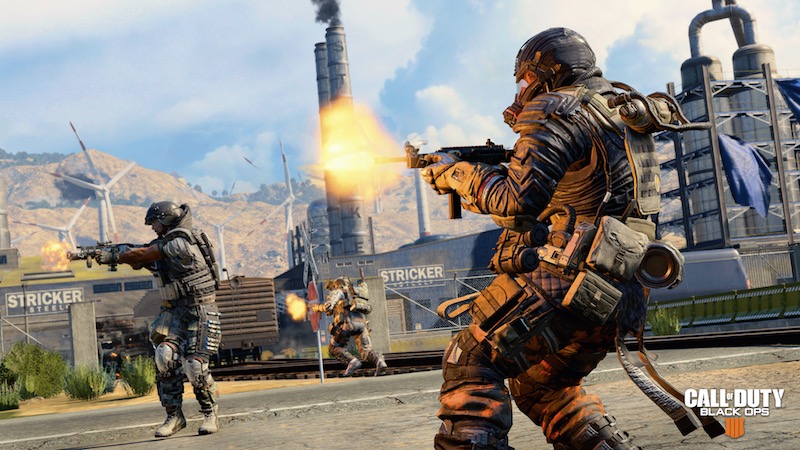 The obnoxiously numbered Black Ops IIII is actually the (tries to count, gets confused, checks Wikipedia) fifteenth entry in a series that has sent gamers shooting and stabbing their way through World War II, Modern Warfare, the far-flung future and back again. In it, you run around and shoot and stab and kill people – usually Nazis, often Nazi Zombies, occasionally a cartoonish villain from a generic Eastern European country – through beautifully rendered environments and epic set pieces. I’m guessing there’s some kind of canonical Call of Duty mythos that angry gamers are already venting about on reddit, but really, who cares? Anyway, the story in CaIIII of Duty: Black Ops is all but absent (more on that in a moment), replaced with a handful of multiplayer modes but no single-player campaign.

Blops the IVth is an online-only first-person-shooter that can be a blast to play with a group of friends, less of a blast when up against far superior thirteen-year-olds, and not at all worth the time commitment that said thirteen-year-olds put into it. Like every other shooter these days, Call of Duty: 2 Black 2 Ops’s main attraction is its own take on the much ballyhooed “Battle Royale” genre, here called “Blackout” because, um, I guess it sounds cooler? For the uninitiated, Battle Royale is a genre of online shooter where you’re dropped (quite literally, from a helicopter) onto a massive map alongside 99 other players, and let loose to kill each other one-by-one until only one thirteen-year-old from Iowa is left standing. Popularized by the likes of Fortnite and Player Unknown’s Battlegrounds, on paper they’re a brilliant idea: who wouldn’t want in on a 99-person-free-for-all death match?

In practice, your Ca4 of Dut4 Blac4 Op4 Battles Royale go a lot like this: first, you land from an epic parachute drop (which really is quite cool). Then, you scramble around trying to collect as many items and weapons as possible. Then, you wander about for ten minutes because the map is so large you can’t find anyone else. Then, a thirteen-year-old from Missouri shoots you dead. Then, you can either spectate for another 30 minutes as far better gamers shoot it out, or drop back to the lobby to find a new match where you can be defeated by a different thirteen-year-old. Look, it’s still fun losing one game after another, and you will get better, but unless you’re a Ninja, you just have to accept that you’re not going to win. Call me gramps, but it’s hard to see the long-term appeal of that kind of mode. 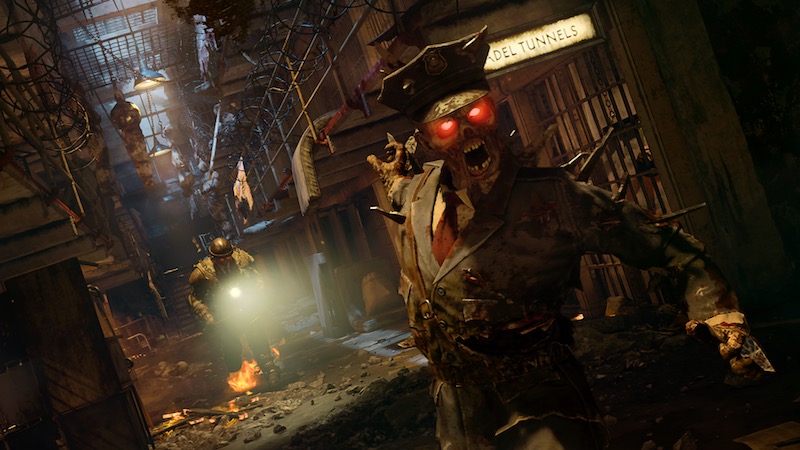 THE MODE THAT REFUSES TO DIE

When you’re done losing to thirteen-year-olds, you can always switch over to the mode that, despite the industry’s best efforts to kill it through overuse, keeps rising back up. I’m referring, of course, to ZOMBIES. Just in time for Hallowe’en, Call of Duty is back with another – admittedly excellent – go at the zombie shooter genre that it invented.

Here’s how it works: every round, you’re thrown into a team of 2-4 players on one of a handful of maps – pre$umably more coming a$ DLC – where zombies are attacking and your one and only task is to survive. The longer you do, the better your weapons and items get, but also the more aggressive and numerous the zombies. The maps are pretty cool – I really like the Gladiator-themed ring, which gives off a serious Gauntlet vibe – as is the feeling of just barely surviving a wave, taking a deep breath, and gearing up for the next onslaught. Maybe it’s the scent of pumpkin in the air, but for my money this is the best mode in the game.

One thing painfully absent from Bllllack Ops is a single-player campaign, which, sacrilege as it may be to say this, was always my favourite part of the best Call of Duty entries. Instead, there’s a kind of meta-narrative – including occasional cutscenes – that attempts to provide narrative justification for the Battle Royale and generic multiplayer modes. But it mostly just gets in the way, and I don’t imagine players will care about any narrative other than the one about that crazy kill-shot they saw on YouTube last night.

Without a single-player mode, the game is sorely lacking in the set pieces that made, say, Modern Warfare‘s single-player campaign one of the greatest games of all time. Sure, the multiplayer maps are cool, but they’re basically just giant digital paintball fields of the type we’ve been playing since at least the original Counter-Strike. Prettier, but not exactly exciting. 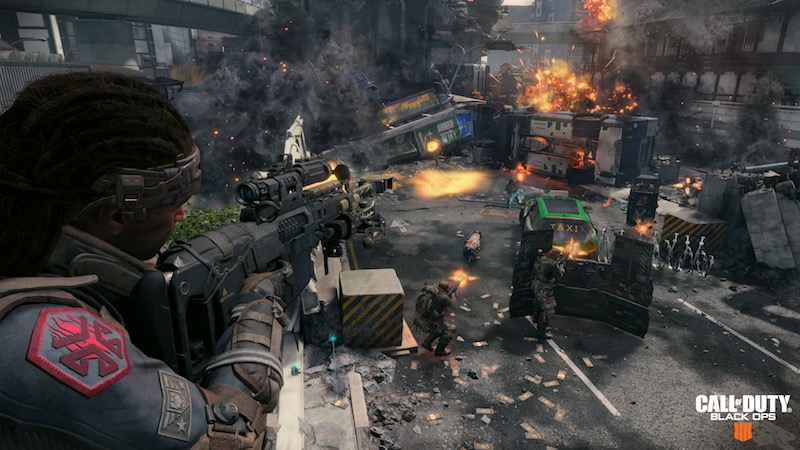 If there’s one word to describe the weaknesses of Blops IIIIIIIIII, it’s Time. As in, it asks too much of it and doesn’t award enough in return. It’s not just the outsized time commitment you need to put in to be even half-decent at losing to thirteen-year-olds. That’s bog standard for online shooters these days. It’s also the smaller design choices that could only have been made to drive players mad with impatience. For example, many menu selections require you to hold a button down, rather than, say, just tapping X. It’s a bizarre design choice that might(?) make more sense on a PC but is just awkward on consoles.

Joining a Zombies match is also gruelling. In what has to be the game’s worst oversight, there’s absolutely no time limit to the pre-mission screen, and missions will not launch until the majority of players select the Ready button (by holding down the X button for a seeming eternity, of course). Since there’s also no way to boot idle players, you’ll wind up waiting forever until random online strangers finish picking their weapon load-outs (or running errands at the local grocery store, for all I know).

Battles Royale also generally suffer from the fact that you spend far more time out of combat. Even if you can commit the hundreds of hours it takes to get good (and I really don’t think you should), most of your match time is spent collecting weapons, exploring the sprawling map, and then booting back to the main menu to try all over again because you were knocked out early in the round. Fun?

The fact is, if you’re going to play Black Ops 4: Electric Boogaloo, you probably already own it. It’s the kind of multiplayer game that builds a huge following right from launch day and which, if you’ve got the time for it, will provide years worth of competition, including the inevitable e-sports tournaments and YouTube series. It’s actually very good as a mindless online shooter, if you’re really into mindless online shooters.

But if, like me, you’re the kind of gamer who prizes games as interactive art, and who likes stories in their games, then BIVops isn’t for you. Especially not when the Battles Royale start to lose their appeal after your fortieth loss, and especially when the three Zombies maps start to wear thin, and anyway it’s a pain to get to them because RiverdaleFan666 from Omaha (age: you guessed it) refuses to hold down that X button and just start the mission. (And let’s not even get into how uncomfortable it is to be playing a jingoistic gun-loving American war game in this day and age.)

Call of Duty: Black Ops 4IVIIII is not for me. It’s probably not for you, either, if you’ve read this far. But if, on the other hand, you got so bored reading that you switched over to a Call of Duty live-stream on your iPhone ahead of your next marathon play session, then enjoy your time. And mazel tov on your Bar Mitzvah!

Our review of Rival Megagun, developed by Spacewave Software (a Canadian company!). Released on November 29, 2018 for PS4 (reviewed), […]