That’s what the beloved 90s college rock band The Cranberries would be singing if they were alive today (they all died, correct? I’m not actually big on the whole “research” thing. I’m too Alt for that) 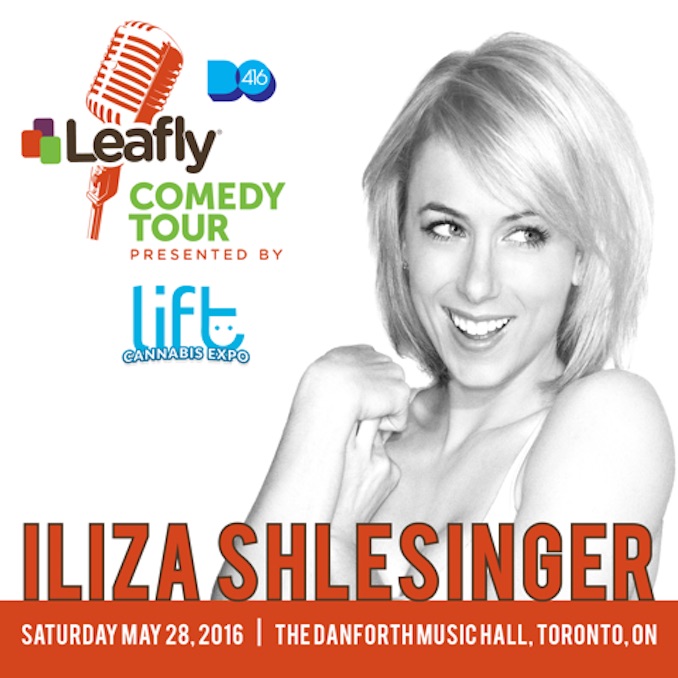 This Saturday, May 28 it is the LEAFLY COMEDY TOUR, and for reasons we can’t fully comprehend, its 100% free. Yes, free. Totally and inexplicably gratis.

This ridiculously good and definitely affordable show marks the Toronto return of headliner Iliza Shlesinger, who appeared in 2014 at Toronto’s JFL42. The season 6 winner of NBC’s Last Comic Standing – and, well worth a mention she was both the youngest comic and first female comic to take home the title. Netflix is now home to two full-length specials from Shlesinger, with War Paint and Freezing Hot. And you might also recognize her as the host of the current comedy game show Separation Anxiety on TBS.

I last talked to Shlesinger a couple summers ago in the run-up to Toronto’s JFL festival. She ripped on the name of our Talkhole Podcast Network over the line, and gave us one of my own favourite pieces of tape still in regular rotation today.

Shlesinger will be joined this Saturday at the Danforth Music Hall by comedian Brandon Wardell and some of Toronto’s top up and coming comics lined up as opening acts.Don’t forget, its free. It’s this Saturday and first come, first serve. It will fill up fast.

Brought to you by Leafly, this 420 friendly comedy tour is in support of pot causes. Along with the LIFT Cannabis Expo. Comedy in support of weed? It’s a match made in heaven.

That’s your cue Toronto. Line up for this lineup, Saturday at the Danforth. That’s our weekend pick for the city’s best comedy. You don’t want to be left out. Do you? All the cool kids are doing comedy.

Get Inspired And Take Action With CBC Podcasts’ The Kill List

In December 2020, a body was found on Toronto’s Lake Ontario coast. Her name was Karima Baloch, or Karima Mehrab, […]