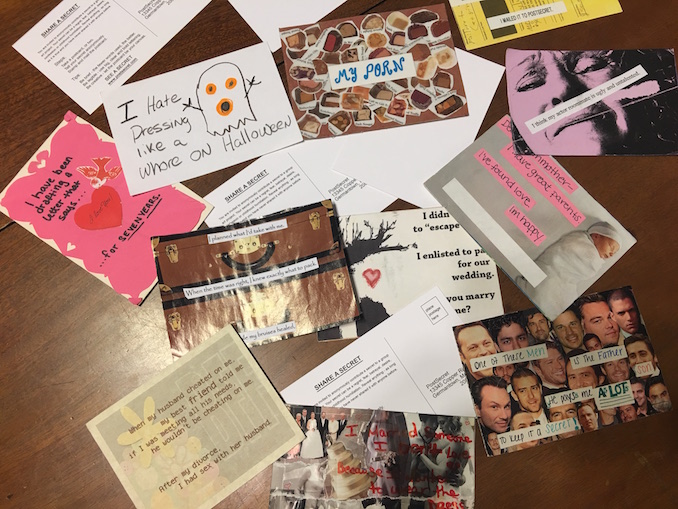 The internet has given so many people a place to voice themselves. The good, bad, and the ugly can, and have, revealed themselves like never before. You may have heard of PostSecret, a blog that first started as a place where people were invited to share their deepest, darkest or funniest secrets. The site became a phenomenon and has evolved over the years. PostSecret has expanded to including an app, album, art exhibits, and  6 books on the New York Times ‘Best Sellers’ list. What more could come of the love of sharing secrets? How about a stage production? Yep! PostSecret: The Show coming to Toronto May 3 to 8 at the Panasonic Theatre.

Wow! Who knew this was going to happen and from a blog? “I know!” said Warren, “It’s so powerful and the truth behind the secrets and how they can be heartbreaking, hilarious, inspiring, and romantic can also happen all at the same time.”

I had a chance to meet up with Frank to find out about the secrets and this new show.

How did the stage come about?

FW: I was approached by a team of creatives to put the show together and we’ve been working on it for five years now. We’ve just finished a 25-city run of the show in the U.S. and now we are thrilled to bring it to Toronto.

This all started as a blog, what made you decide to start a blog in the first place?

FW: Originally it started as an art project. I passed out postcards and people would write their secret on the back, decorate the card and mail it to me. Then I took those and posted them in a gallery show for a couple of months. When that was over I scanned them and put them on the web and then the idea started spreading virally. People began to make their own postcards and they were arriving with postmarks from everywhere and not just from Washington D.C. but also Texas, California, Vancouver, Toronto, Hong Kong, Melbourne, Dublin, and they haven’t stopped coming! It’s been 12 years now!

I heard you had to make room in your house for the postcards?

FW: Yes, I had to build an extra room in the basement but actually all the postcards right now are on exhibit at the Smithsonian Museum in Washington D.C.

Any idea how many you have collected over the years?

FW: Oh, I’d say over a million at this point. There are a lot of secrets out there! 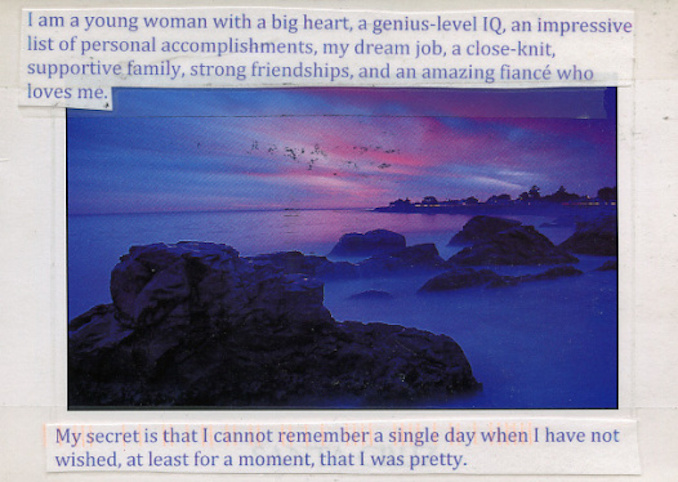 Do you remember one of the first one’s you had received?

FW: One of the first ones I got, someone just wrote “I’m a white guy, but I like black girls.” I had that posted in the exhibit and then somebody wrote a message on it that said,  “That’s OK!” I feel like in so many ways, that kind of response has come back to the project whether it was something on the web or in the books, play, people seem to want to respond back to these secrets that really touch them. They seem to want the person know that they aren’t alone.

This phenomenon of sharing over social media is so fascinating, right? On one hand it’s so public but then here it’s so personal.

FW: You made me think about two things here. There’s a lot of sharing on social media but I feel like a lot of it is not the authentic type. It seems like it’s more about projecting an image or wearing a costume. On PostSecret, the postcards themselves and with the anonymity, I feel like it’s exposure that’s more vulnerable. I feel it’s a more intimate kind of sharing.

FW: I had a job retrieving medical information for clients. I did that for about 20 years. It was a good job but it was boring. I think that boredom pushed me to pursue these creative larks on the side. This was one that caught fire and eventually it turned my life upside down. I ended up selling my business and spend 40 to 50 hours a week on PostSecrets now.

So, about the show? Funny? Emotional? What can we expect?

FW: Everything about the show is non-fiction. It comes from the secrets and the stories behind the secrets and we bring them to life. We invite audience members to write down their secrets at the show. The actors also have a chance to reveal a personal secret of theirs. There are some humorous and maybe shocking secrets but the most emotional part of the performance is when we share back the voicemail messages that people have given to me. These people who have saved messages on their smart phones, and sometimes for years, that were left from people in their lives who have passed away. It reminds us that at some point we will leave one of those last messages for those we love.

You’ve brought a few postcards with you. Care to share one?

FW: “My husband won’t have sex with me anymore so I masturbated with a cucumber and served it in his salad for dinner.”

PostSecret: The Show is an immersive, poignant journey through the humour and humanity of the personal stories we keep to ourselves, and on rare occasions, share with others. Projected images, videos, three actors and a guitarist guide the audience through crowd-sourced narratives revealing the true stories behind the secrets. The stage performance shares hopeful, shocking, painful and sexual secrets that brought hundreds of millions to the PostSecret blog.

Frank tells me that the show is very interactive. At the beginning there will be a tweet wall so pay attention to that. It will populate with audience members tweets.

Performances in Toronto run May 3 to 8, 2016, at the Panasonic Theatre. For more information visit www.mirvish.com

Got some inspiring words? Mirvish Productions wants to make you famous

Some of us are looking for love and light through these murky times of COVID-19. Heck, I’m sifting through lyrics […]

Shona White and Lucy May Barker chat about MAMMA MIA!

If you ever want a feel good and entertaining night out, you can pretty much bank on MAMMA MIA! Judy […]