Come From Away is a heartwarming musical based on the true stories of travellers temporarily diverted to Gander, Newfoundland as the world changed on September 11, 2001.  One of those displaced was Kevin Tuerff who was returning home to Austin, Texas from a Paris vacation with his partner.  They had a scheduled layover in New York but that would not be their destination. They suddenly found themselves in unfamiliar territory along side nearly 7000 other stranded travellers. Planes were grounded in Gander, nearly doubling the town’s population.  But in true East Coast form, the people of Gander did what they knew was right, they opened their hearts and homes.

Tuerff’s personal story was woven into the musical that has sold out to standing room only shows in Toronto before it moved on to Broadway.  The musical was also nominated for seven Tony Awards, including Best Musical.

The experience also led him to writing Channel of Peace: Stranded in Gander on 9/11 that offers a story of kindness and more insight into the time spent in Newfoundland. Tuerff recently made a stop in Toronto during his North American book tour. We had chance to speak with him and find out more about his book. 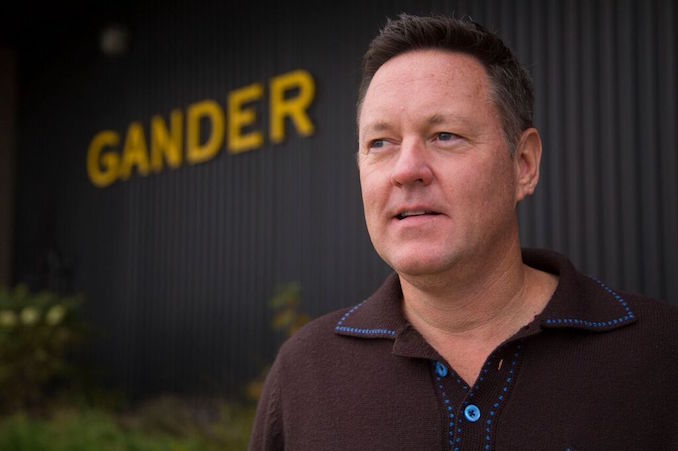 What was it like returning to Gander during your book tour?

Returning to Gander is like going to my second home. I have many friends there, both from my 2001 experience, and with Come From Away connections. My “Kindness to Strangers” tour was successful in allowing me to visit more parts of the province. Overall, I traveled more than 1600 km with 16 events over two weeks.

Why did you decide to write this book now?

I’ve been relentlessly telling the story of Gander on 9/11 since 2002. That said, when Come From Away debuted on the West Coast of the US, audiences loved the show, but wanted more. They had no idea about this story, and they wanted more. I published “Channel of Peace” to share my personal experiences that aren’t included in the musical, plus the best of our Pay it Forward 9/11 stories over 15 years.

What do you hope people will discover from reading this book?

Kindness to strangers is vitally important in restoring our faith during times when our world is divided. Many people have lost touch with their own neighbors, and many live in fear of immigrants and refugees. Gander continues to set an example to the world about empathy and kindness. In 2016, Gander Refugee Outreach adopted four Syrian refugee families. Twenty-five percent of net proceeds from book sales benefit this organization.

There were hundreds of people stranded in Gander, what do you think made your story stand out to be included in such a heartwarming production?

I’m honored to have my story represent some of the 6,527 passengers and crew who were treated with kindness during America’s darkest day in 2001. I’m not sure why I was chosen, but perhaps the writers (Sankoff and Hein) liked my annual Pay it Forward 9/11effort. One thing I was surprised to learn from this tour is that most Canadians don’t know September 11 is a federally recognized Day of Service in Canada, honoring the 24 Canadians murdered in the 9/11 attacks.

When you first found out about being detoured to Gander, what were some thoughts that crossed your mind? Have you visited anywhere in Canada before this?

I’m embarrassed I didn’t know anything about Newfoundland when my plane was diverted there. Now it’s one of my favorite places on the planet. I’ve been a big fan of Canada: My grandmother was born in Londonderry, NS. I’ve visited Montreal, Toronto and Vancouver, attending the Winter Olympic games.

9/11 made such an impact on so many lives and have changed so many of us. What changes have you seen in yourself?

On that tragic day in America, I witness the kindness to strangers which restored my faith in humanity. In today’s divided world, both Come From Away and my book have been called a “salve” on an open wound. There are many good people across North America. Sometimes we need a jump start to the heart. After attending a spiritual retreat in 2016, I realized what happened to me in 2001 has opened my eyes to the global refugee crisis. While we weren’t seeking asylum, there are many things we share in common. We had no food, clothing, shelter or information.

Pay it Forward 9/11 is a grassroots initiative which aims to encourage everyone to do three good deeds for strangers, and to ask them to create a ripple effect of kindness, by keeping the idea going. I’m partnering with the Canadian National Day of Service Foundation to encourage all Canadians to do good deeds, organize a community service event, or donate to their charity of their choice that day.  Learn more at http://payitforward911.org or cndsfoundation.ca.

So, how many times have you seen Come from Away?

I’ve seen the show 21 times over four years, in each stop along the way.

Any funny/quirky stories that you can share from your experience in Gander that we might not know about from the musical?

We weren’t allowed to remove our luggage from the plane when we went to our shelter, due to concern about potential bombs. So by day two, we needed new socks, underwear and a t-shirt. We learned there was a Walmart in town, not far away from where we stayed at the community college in Gander. When we set out by foot, a car quickly pulled over and asked us if we needed a ride. Now, my mother always told me “never get into a car with strangers” but this felt right. We were delivered to Walmart in no time.The driver refused any money. In many ways, Gander started ridesharing in 2001 and they didn’t know it. This happened all over Gander, even though nobody went on TV and encouraged citizens to do this.

Inside the Walmart, there was nearly a fight in the men’s underwear section. It seems there was a run on the store, and all the tidy-whiteys were taken, leaving only boxer shorts and bikini briefs. There were a few elderly men who were staring at the shelves in a daze, unsure what to buy.

To find out more about Kevin Tuerff’s book Channel of Peace: Stranded in Gander on 9/11  visit channelofpeacebook.com . The book is available through Chapters Indigo, and Amazon.ca

Come From Away, the heartwarming musical, will return to Toronto beginning February 13, 2018 at the Royal Alexandra Theatre. For more information visit mirvish.com

The Faces Behind A Gentleman’s Guide to Love and Murder

By all accounts you should treat yourself to a ticket to the Tony Award-winning Best Musical, A Gentleman’s Guide to […]

Still here? Yes, us too. But we’ve been keeping an eye on what’s up and coming in the arts scene […]