I am from Calgary, and I lived for a long time in Vancouver as well. I have lived in Toronto for about a year and a half, though I’ve spent a large amount of that time away from my new home, so it still feels very unknown to me.

I have made art collaboratively with Rhonda Weppler since 2004, though we are only intermittently together in the same spot, thus we are big users of Facetime and Dropbox. Winning the Glenfiddich Prize is amazing, not least because it affords us some time to work side by side in what promises to be an interesting environment: the culture of whisky making is a fascinating world unto its own. It’s hard not to be overwhelmed by the more pragmatic and mundane concerns of being an artist, and residencies allow that rare moment to reflect on the core concerns of your work. 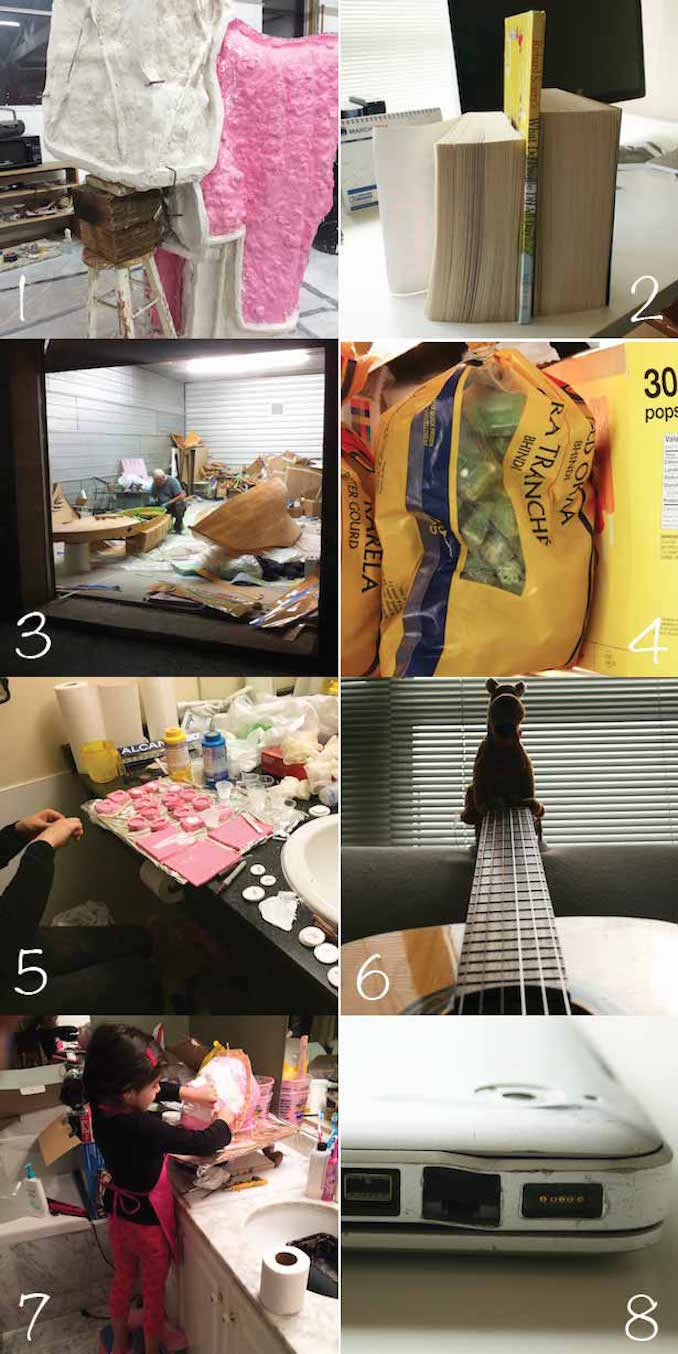 01 A mould being made of a project of ours by InBronze foundry. This took them something like a week and a half of 12-hour days.

02 Two in progress, one in rotation. Left: Roberto Bolano’s 2666 (yes I’m slow on the uptake). Right: Bob Stanley’s Yeah Yeah Yeah. Middle: who does not like this?

03 My dad helping during the last week of a particularly hard project in my Rexdale studio. We were working until 2 am and back up getting coffee at 6.

04 I work when everyone else is asleep, and my wife usually wakes to find the sticks from five of my daughter’s popsicles in the bin. Beside this is my mother-in-law’s okra and bitter gourd. Lives brought together in the freezer.

05 Moulds getting made in a hotel in Langley near the foundry we are working with. You do what you must.

06 Wichita Lineman is offered, which the audience accepts, though they really want Scooby Doo. I work that in.

07 The careful work of building up a mother mould with plaster bandages.

08 Everything I own has been dropped, torn, stained, scuffed, punctured, cracked. I absent-mindedly run my finger over the various damaged parts of my laptop when I am thinking.

I am a self-employed artist, working collaboratively with Rhonda Weppler, and my studio is in Rexdale, though I travel a lot to make works on site.

Currently in a show about collage at the Musee d’art Contemporain de Montreal, and in show at Alter Space in San Francisco called Wabi Sabi. Here in Toronto at Pari Nadimi.

Call to Artists for the 2014 Glenfiddich Artists in Residence Prize Deep in the Scottish Highlands, the Glenfiddich Distillery creates […]

Introduction by Audrey Ferron (girlfriend): Photographer Giulio Cosmo Calisse was born in Rome, Italy and grew up in the United […]

“Samara Shuter’s epic paintings of men’s suits are equally powerful and playful. She draws upon her passion not only for […]