Currently based in Montreal, QC, artist Georgia Webber fell in love with comics while a student in her home town of Toronto. She remains tied to Toronto’s vibrant and active comics community through social media and events like the Toronto Comics Arts Festival. Georgia is a passionate and vivacious creator bubbling over with new projects.

What first attracted you to make comics as a form of artistic expression?

Comics gave me a gateway to artistic expression that I had previously found to be frustratingly elite. (I actually wrote a blog post about this some time ago when I was pretending to like blogging). When I had this “Aha!” moment, I just started running with it, drawing whatever popped into my head at any given time, mostly nonsense. It was beautiful. It was like the cork of a champagne bottle being popped, and all the bubbly creativity in my body and mind just started pouring out. That’s what first attracted me to comics, and what keeps me adoring them with every particle in my being. Limitless possibility. 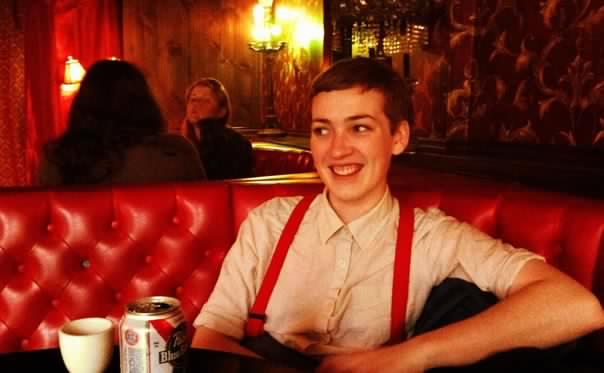 What does writing and drawing comics allow you to express that other art forms don’t?

For me, it’s all about the details. You can forego all of them, and deliver the goods clean and simple (which is a more complex process than you might imagine), or you can drench your work in visual metaphor and foreshadowing, little jokes and background stories that would require explicit statement in words alone, and that might clutter an image that doesn’t rely on words for clarity. You can relay simultaneity in a way that doesn’t exist in linear prose. Poetry comes close, I think, but that’s a whole other kettle of fish.

What qualities characterize your work? Who and what are you most inspired by?

My work is still deep in development and exploration, so nothing really characterizes it yet. It could be anything! I am drawn to certain types of stories over others. I would classify a lot of it as Magic Realism, a depiction of an everyday world with an element of fantasy injected in there to mess with everything. My favourite artist for the past few years has been Joseph Lambert, whose work is consistently the epitome of my taste. My own work doesn’t look much like his, but I could gush about it for hours, just luxuriating in the details. Things that inspire me to write stories are: other peoples’ work, language (I’m studying many of them, and linguistics in general), and trying to invisible things in image. Sometimes I’ll just hear something and think “how could this be represented visually?” and that becomes a story idea.

What kinds of images do you find most sublime? What images disturb you?

My favourite images are almost always of happy people, usually together in some fashion. Every time I see people holding hands, I break into a smile. Can’t help it. But also seeing a bitter sweet moment where the sweet has just the slightest advantage over the bitter — that feels very real, and I am a big fan of reality (subjective as it is). I am extremely disturbed by a particular style of art: the old Ren and Stimpy, with the overly detailed, grotesque representations of people or animals, all bodily functions and shock value. There is absolutely no beauty in that for me. Images of suffering, too, but that’s more obvious. It’s not very often that art disturbs me in that way, it’s far more likely that I will feel nothing for a piece of art than that I will be upset by it. Even if I don’t like it, I can usually see that it’s an aesthetic difference preventing that connection. But sometimes there’s just nothing. That’s disturbing. 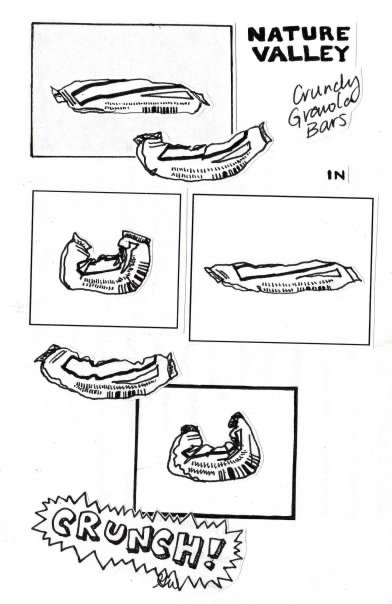 How does the profoundly collaborative aspect of making comics shape your work?

The collaborative possibilities in comics are very exciting for me! I’m always trying to find ways to include people in my creative work, and especially if it can be light-hearted and fun. Fun is so important to creative freedom! And while I don’t often choose to work collaboratively on major projects, I’m always happy to toss ideas around, and get feedback on things I have in progress. That was the whole basis for my collaborative zine project from 2008-2010, gangLion comics. It started with a friend and I wanting to create a venue to showcase comics made by our friends, but quickly turned into an experiment in peer support. I was completely invested in everyone who wanted to try making comics getting the chance to, whether they were a writer or an artist or both. We had meetings to introduce ourselves and chat about ideas, we set up collaborators, we created the whole thing, start to finish, with as much group involvement as possible. I think that kind of collaboration — the kind that supports each individual’s voice and right to express it regardless of inborn talent — is essential to community in creative endeavours.

What subjects do you end to tackle in your own work?

I have a tendency to focus on personal battles in my work. Everyone is struggling with something, with many things in fact, and we all have experiences that challenge our particular issues with ourselves. I pay a lot of attention to people’s individual systems of being in the world: how they cope with controversy, where they grow, what they lack, and what their unique brand of happiness looks like. I don’t tend to write grand, expansive stories; I like small worlds, emphasizing the many ways people connect to each other on a small scale.

In addition to making them, you also write reviews of comics. How does reviewing a comic differ from reviewing other art forms, like text-based books or music?

Oh, my! When I’m reviewing comics, I have to reign in my analytical nerd brain and remind myself that most people do not want a panel-by-panel breakdown of an artist’s storytelling choices, perspective, character design, artistic voice, etc. I have to turn the volume down from eleven to five so that my reviews remain compact and comprehensible. One of comics’ blessings to the reviewer is that you can read one in a very short amount of time to get your first general impression, to have the experience that a reader would. Then, because certain images really stick in your mind, you can take the time to flip through it again and find what peaked your interest. I like to read the book through once, and then go back and read it in smaller chunks a bunch of times afterwards, just taking notes as I think of them.

What defines the Toronto comics community is particular? What makes it so special?

The Toronto comics community has exploded in the past few years! I almost moved back there in May when I visited for the Toronto Comic Arts Festival (TCAF). There have always been comics creators living in Toronto, and comics enthusiasts alike, but through the efforts of Christopher Butcher, Peter Birkemoe, and others at The Beguiling, as well as initiatives like The Toronto Cartoonists Workshop, it has become something of a Canadian mecca for creators. It used to be that Montreal, my home of the past two years, was seen as the Canadian comics city, hosting powerhouse publisher Drawn & Quarterly and having the francophone bandes dessinées population that it does (it’s huge, by the way!). But the success of TCAF has really proven Toronto to be a nurturing environment for creators at all levels of experience, and as always, there’s more money in Toronto than other Canadian cities. The combination makes for many opportunities and chances at community for anyone who is interested. It’s really an amazing thing, even if I can only appreciate it from a distance. 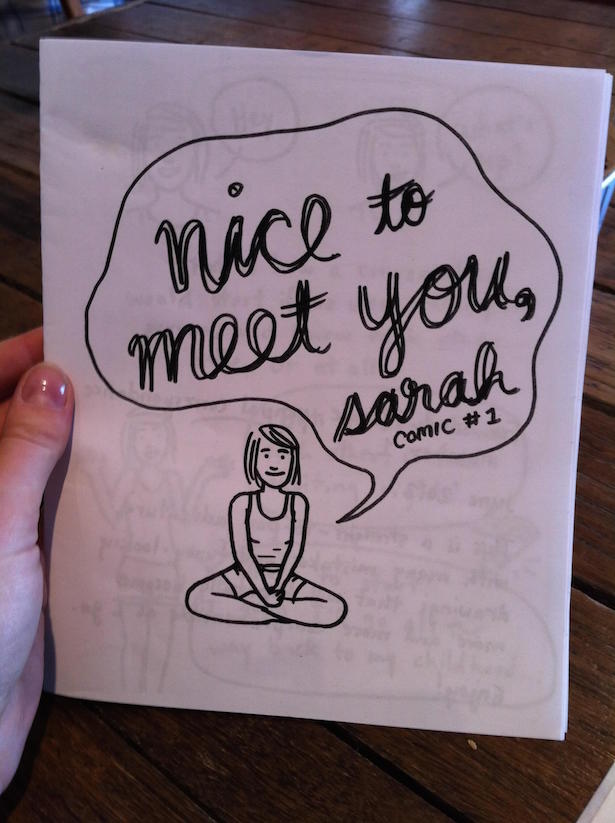 You can’t! Hahaha! Well, you sort of can, but in my current mode of exploration and discovery, I don’t spend a lot of time making my efforts public. You can follow me on twitter where I post drawings in progress, and little comics for my friends, or you can follow my Tumblrwhere I do basically the same thing. I like to be present on these platforms, but I’m not a religious updater. You can always find me at TCAF, though, and by then I should have some zines to pass around, and who knows — maybe even a website! If you’re interested in my reviews, you can find them at Rover.

Georgia Webber is a Toronto-born cartoonist living in Montreal. Whenever she’s not obsessing over comics, she can be found fixing bikes, serving coffee, studying languages, and doing yoga. She loves sharing her knowledge through workshops, discussions, and generally hanging out. Georgia’s lifelong goal is to be happy, and she’s getting pretty good at it. She welcomes your inquiries, enthusiasm and conversation on any of these subjects. 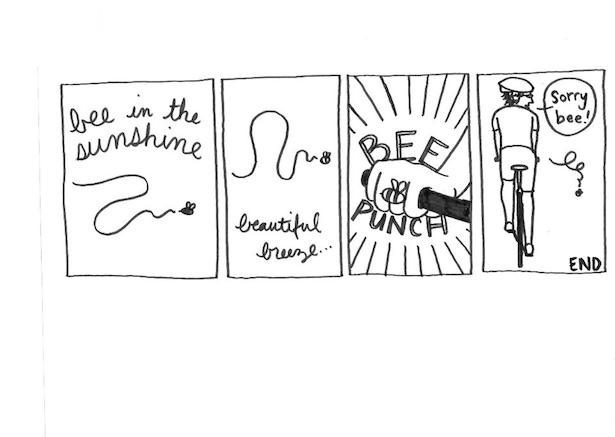 Two and a half months after its grand opening, Easy Tiger Goods hosted its first art exhibit last Thursday night […]

Kelly Kyle is a Toronto based Conservation Picture Framer, Gallerist and Photographer. Kelly’s career as a framer began over 25 […]