Karaoke: ( Japanese kara  “empty” and ōkesutora “orchestra”) is a form of interactive entertainment or video game in which amateur singers sing along with recorded music (a music video) using a microphone and public address system. The music is typically a well-known pop song minus the lead vocal. Lyrics are usually displayed on a video screen, along with a moving symbol, changing color, or music video images, to guide the singer.

Most people are familiar with ‘karaoke’. (Thank you, Whitney Houston. We will always love you too.) But, if you’ve never been to a Hip Hop Karaoke, you don’t know what kind of magic you are missing. There is nothing in the world comparable to seeing some little tiny twenty-something cute Jewish princess get on stage to unleash her inner M.O.P., while exploding violently during a performance of  “Ante Up”, trust me! Furthermore, “I Love Rock and Roll” by Joan Jett certainly is an eternal rallying call to humanity, and if you throw it on and scream out the lyrics, people will love it, and probably join in at various parts. But in the last generation of music listeners, we can say the exact same thing about “Hip Hop” by dead prez. And once that bassline drops… shit is fucking serious!!!

With “regular” karaoke, I know it can get serious as well, but there isn’t too much further I think people dream to go when they get drunk at their sister’s best friend’s wedding to belt out their slurred version of “Don’t Go Breakin’ My Heart” or “Loser”. Karaoke originally was just a fun way to become a superstar for a night, and have a few friends as fans cheering you on while you vicariously live your favorite bathroom rocker moments on a tiny little stage at a local bar, or in some random-ass fun competition. All it took was a willingness to butcher, embellish or sustain a variety of notes and words being broadcast to you while a bouncing ball flashed on the lyrics of the pop song written across the screen, while screeching up the sweet storm of pop radio joy you’ve done hundred times while driving to work for three minutes and thirty seconds. People who take regular karaoke performances seriously are, well… let’s just say their energy could be focused on higher aspirations. But Karaoke was never meant to be anything more than harmless fun on a Friday or Saturday night, was it? Then: Hip Hop Karaoke kind-of took that whole shit and flipped it on its head. 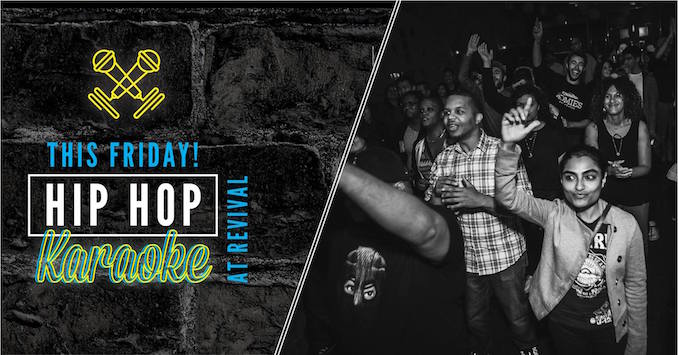 Anyone who knows anything about creating hip hop should know Allah Rakim’s #1 Rule: NO BITING ALLOWED. Hip hop was created by interesting people doing unique things in a totally original way. They were taking elements of the past, and recontextualizing them for the present and the future. So when HHK first was conceived many moons back (7-10 years ago, depending on whose perspective you are looking from) a bunch of hardcore hip hop heads were like “That’s rap blasphemy! You are not Nas, so you should not be able to get a mic and be allowed to butcher Nas’s songs! Oh you wyle for the night, and now you wanna try a Busta Rhymes track? Or you had some gin and juice and you feeling like getting your Wessyde-let’s-ride Snoop Dogg vibe on??” Well…

It began to work. VERY well! There were times in the beginning days of HHK where random people would massacre, slaughter and sacrifice a song in front of saddened fans, who are like “Booooo! you have sullied the good name and flow of Lil Wayne, and your version of ‘Lollipop’ probably did not need to be shared with the world. Cue the hook!” But honestly, there are times where you can see the moment of opportunity come together miraculously for some superfan who has been listening to the burning words of that one rap song of theirs so passionately, that, when given one chance to perform it, they knock it out of the park. Case in point: I’ve seen a beautiful young lady from Hamilton, Ontario alter her soul on an animalistic level and absolutely obliterate a performance of “Lose Yourself” by Eminem, and blow everyone’s brains away. I’ve seen rotund office workers mount the stage wearing spectacles and ties, and voraciously burst out Wu-Tang anthems like a poor performance meant being murdered by Ghostface Killah himself. You never know who will kill it!

HHK doesn’t use bouncing balls or teleprompters, and usually the practitioners know the words to all (if not, most… if not half, if not… god dammit, only a few of the standout lines) of the song, which really helps with the wordiness of rap music (unless you’re doing Lil Jon, Juvenile or Boozie.) Just performing the words and flows with the same timing seems to be the best bet, as few people expect a person off the street to sound exactly like Kendrick Lamar or Jadakiss. Can you rhyme as tight as them though? You better, cause if not, you will get your ass handed to you pretty damn quick! HHK has grown across the world, and has its own subculture of support in hip hop culture now, but there have been times where cats get booed the fuck off the stage, just like if they were at the Apollo Theater or just an ordinary MC opening up for a regular concert. “Ain’t no half-steppin’” aren’t just pretty words that Big Daddy Kane said in 1988, they apply to performing them in 2014 and beyond!

Honestly and ultimately, both versions of karaoke are fun, and should be tried by everyone, no matter the differences between them. When you are belting out “Like A Prayer” by Madonna, “Born in the U.S.A.” by Bruce Springsteen or even “Billie Jean” by Michael Jackson, the audience is a bit more forgiving if you don’t hit all the notes and reflect all the passion of those classic 80’s superstars. But if you are doing “Forget About Dre” from Chronic 2001, you better come correct with that Dr. Dre double-time rhyme spit, yo!!

Give Love and Take Care.

The Biggest Hip Hop Event is Coming to Toronto this September

Toronto Hip Hop fans, be prepared for the largest hip-hop festival making its way to Toronto this fall. Rolling Loud […]

Just Rickie is a Canadian artist that is just — different. He bends genres and has cultivated a sound that’s […]

Haviah Mighty didn’t need to change her birth name when she decided to dedicate her career to music. In fact, […]