After reading the 2015 Scotiabank Giller Prize winning book Fifteen Dogs by André Alexis, I immediately thought it would make such a good play. And apparently, I wasn’t wrong.

The stage was set to look like any corner of any park- a bit of grass, a few rocks and a bright yellow fire hydrant. The majority of the book is set in Toronto’s High Park, so anyone who has read it will not be surprised to see this quaint setting before them. 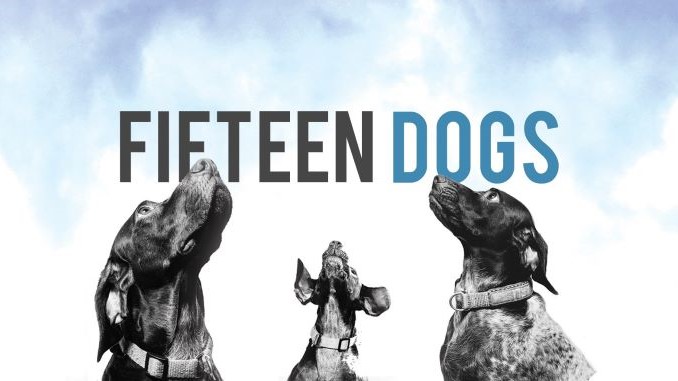 When the play itself opens, we are introduced to the actors through their narration of the story, which they tell weaving in and out of the conversation between the two who set the whole thing up Hermes and Apollo.

For those who have not read the book, the premise (in short) is that fifteen dogs are given human intelligence by the Gods as a manner of a wager between the two. They disagree about humanity and our ability to be Happy. If one dog dies Happy, then Hermes wins and Apollo will have to do his bidding for one year. And if no dog dies happy then…. well,… you get the point.

As the actors change into dogs and the dogs come to life, we are immediately brought into this world of the K9/human mix, where the audience is made to laugh at some of the doggy antics- smelling each other’s privates, peeing on fire hydrants, licking their own genitals, and turning around 3 times before finding the exact perfect spot to lay.

In the first part of the play, the laughing of the audience can make you feel you’re watching a comedy. The actors have done a very good job at imitating dogs causing belly laughs to erupt from the viewers. Yet, moments of seriousness are brought the same reverence and the mix between comedy and drama is seamless.

The standout for me is the actor named Stephen Jackson- Torkoff who plays Prince/Zeus/Miguel and other small parts. It seems as though Stephen is able to truly step into any role he is in and when he is on stage, your eyes are drawn to him no matter the character.

As Prince, for example, he is able to take on the dog’s whimsical character so well that you forget that he plays multiple other characters. His mannerisms as Prince make the audience burst out in laughter throughout the entire play and you are tricked into believing that he is truly this dog.

And yet, seeing him as Zeus or Miguel or even a narrator doesn’t cause those characters to shine any less brightly. I think this young man will be a true star one day and Toronto will owe him a great gratitude.

All in all, Fifteen Dogs is an amazing play that is definitely worth getting to know. Crow’s Theatre should be proud of its production as it brings this book to life in such a beautiful and authentic way. And from what I saw, you might want to get your tickets now as the audience was completely full, and from what I hear, that is a common theme for each performance so far.

You can learn more about the play and buy tickets at Crow’s Theatre. Fifteen Dogs runs until Feb. 12th and are $64.41.

Fringe Fest Toronto is Back!

If you are reading this section, you more than likely love all things Art. And if you are anything like […]

“A Day in the Life” with Toronto Creative Thom Allison