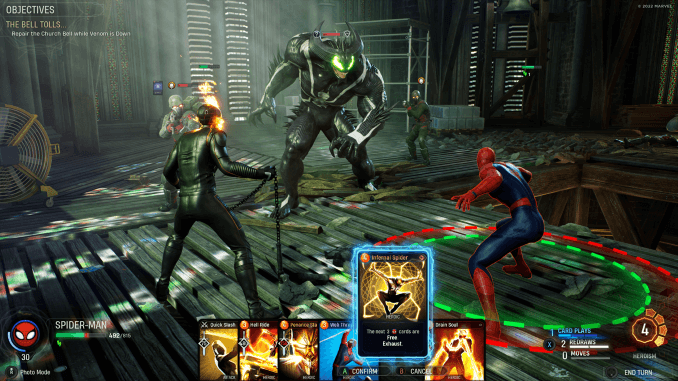 Given its pedigree, it’s little surprise that Midnight Suns is a thoroughly enjoying tactical experience… even if it does drag at times. 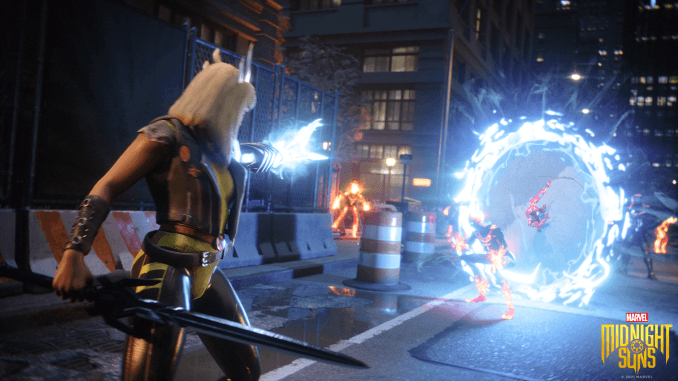 I glance down at my newly-drawn hand of cards. Do I play Captain America, who can powerup nearby allies? Or do I go for Magik, whose mystical sword can slice straight through reality and into the pocket dimension of “Limbo”? Do I even have enough energy to play all the cards I need?  I do some quick math: this card has zero cost and adds one energy; that card will cost 2 but can double my attack power. I make my choice: deploying the Captain Marvel card, I score a swift couple of points; it winds up being just enough to eke out a win on the final turn. Satisfied, I grin at my accomplishment and gear up for the next battle. 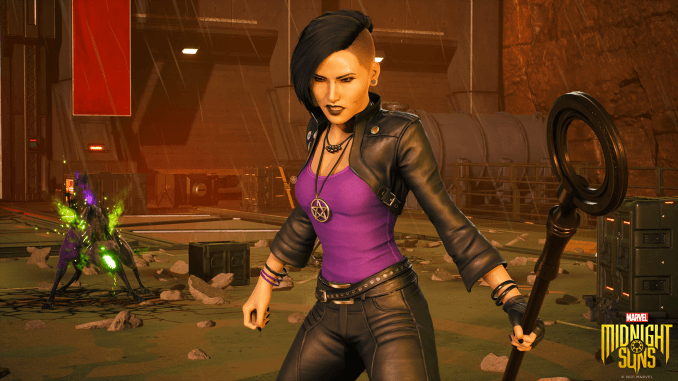 CARDS ON THE TABLE

Poor Midnight Suns. A spruced up deck-building video game infused with the Marvel license, its arrival hot on the heels of the mobile game phenomenon of the season, also a deck-building video game infused with the Marvel license, means that Midnight Suns was pretty well doomed from the start. Not that anyone could have predicted this. Plenty of Marvel free-to-play games have come and gone, and I doubt very much that the developers at Firaxis were worried about some random mobile app from a rookie studio made up of ex-Hearthstone devs. Still, here we are: everyone is playing Marvel Snap, with its addictive, turn-based gameplay, rewarding level progression system, and, just as importantly, $0.00 entry fee. The $79.99 Midnight Suns is unfortunately going to be a tough sell.

Which is too bad, because Midnight Suns is quite fun! Snap might carry the Hearthstone legacy, but Suns is from the folks who gave us XCOM: Enemy Unknown. Which, as gamers may recall, is one of the best turn-based tactics games ever made. Midnight Suns is not XCOM, but it has a fairly meaty story, a great use of the Marvel licence and in particular its more mystical elements, and interesting gameplay in which you send a group of superheroes into battle, their actions governed by a deck of virtual cards.

Cards are divided into three categories: Attack, Skill, and Heroic. Attack and Skill cards make up the bulk of each deck: these cards all cost zero energy – here called “Heroism” – and playing them always triggers both a given ability (either an attack or a skill) and grants you Heroism points. Those points can then be used to play the game’s special Heroic cards, though they can also be used in certain instances for environmental attacks or other moves not requiring a card.

Let’s say you’ve deployed a team of Magik, Wolverine, and Blade. Each character comes with a customizable set of 8 cards, for a deck total of 24 cards. Drawing a random six cards at the start of each turn, you’ll find yourself with a mix of Wolverine-, Blade-, and Magik-specific cards of varying abilities. As with the best deck-building games, the cards are thematically relevant, capturing the flavour of a particular hero while also winking at an audience which knows them from the comics or movies. For example, Wolverine, the mutant famous for his berserker rage and healing factor, has cards which allow him to regenerate health or brutally attack multiple enemies at once.

The witchy Magik, on the other hand, brings cards like “Limbo Portal”, “Soulslash”, and “Reinforcement”. The first two are basic cards with which you can knock enemies through portals, in the process gaining Heroism points. The third card, Reinforcement, is a Heroic card which costs Heroism points and allows you to summon an extra hero to temporarily join the battle. Over the course of the game, you’ll unlock new cards as well as the ability to upgrade existing ones. The text written on the cards is still too damn small (not everyone is playing on a 100″ TV, Firaxis!) but eventually you’ll get a handle on which cards you like best, and which ones have the best synergies with others. 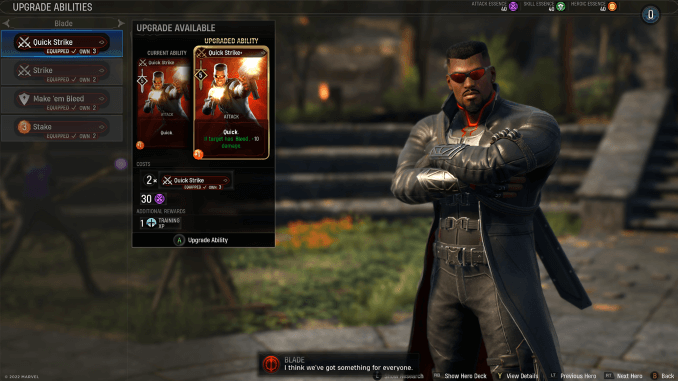 As has become the rule with Marvel games, the story in Midnight Suns is a rather perfunctory “Big Bad wants to rule the world”, which mostly serves as an excuse to bring together digital versions of several MCU-familiar characters. That MCU adjacency pays off in some respects – Lyrica Okano returns as Nico Minoru from the Runaways TV series! – while failing in others – here’s yet another Robert Downey Jr. soundalike as Iron Man. While fans will inevitably wish that certain characters had been swapped out – Marvel’s insistence on pushing the ridiculous Dodge Charger Ghost Rider instead of the O.G. motorcycle-riding Ghost Rider is beyond me – there’s a decent selection of favourites to choose from. Given the mystical theme, there’s a (welcome) emphasis on magical types like Doctor Strange and Scarlet Witch. That said, Marvel can’t resist the temptation to put Spider-Man, Wolverine, and Deadpool in everything, so they’re here too. Oh, and there’s a brand-new character created for this game, “The Hunter”, a player surrogate whose boring name doesn’t even come close to capturing how boring this character is.

Which brings me to the other half of Midnight Suns. Perhaps recognizing that (some) players might demand more than a series of card battles, Firaxis grafted onto this game a whole other relationship-building mechanic to kill time between battles. These sequences are… okay, better even than expected, but also painfully obvious padding. Ever wonder what it would be like to kick back on the sofa and watch a movie with Tony Stark? Well, better steel yourself for some intermittently funny choice-based dialogue while you watch a series of static images of cowboys, or aliens, or whatever else is playing on the in-game TV. The lack of interactivity in these hangouts gets increasingly annoying as the game progresses, with invitations to play cards (no, there is no poker minigame), video games (there is no arcade minigame), or forage mushrooms (there is no gardening minigame). Look, if you’re really invested in these off-brand MCU characters, you might get some mileage out of this, but all this side stuff winds up feeling like just that: a distraction from the main activity, i.e. actually saving the world. 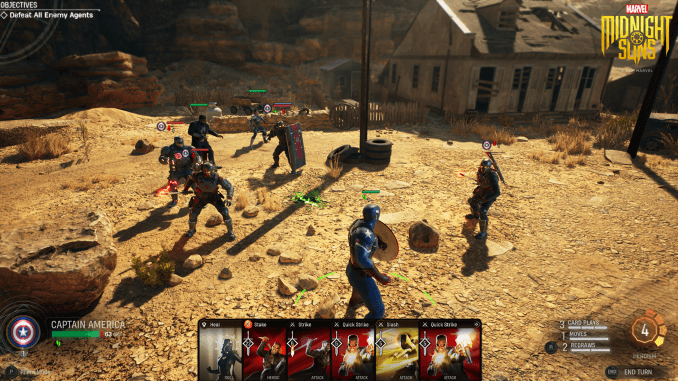 Midnight Suns is further hamstrung by a litany of sloppy design elements, some of which appear to be conscious choices, while others are clearly just the result of inattentiveness. Why is the font size so tiny in a game entirely built around reading card descriptions? Why can’t I turn off the subtitles? Why can’t I pause during cutscenes?

Some aspects of combat are also confusing: it’s not always clear how long a mission is supposed to last, or the limit (if any) on enemy reinforcements at any given time. It’s also not always clear why some tactics, like environmental attacks, aren’t always available. This adds the wrong kind of randomness to battles, where you’re often left wondering if you’ve got five or thirty minutes to go, or whether you can pull off that sweet combo you were planning.

None of these issues would be as conspicuous if it weren’t for the ready availability of another Marvel-brand card battler currently all the rage. Admittedly, there’s a certain apples and oranges to it all, with Marvel Snap quite literally a game of laying down cards against a static screen (I cannot wait for the inevitable physical release), while Midnight Suns aspires to something properly video game-y, with next-gen graphics and characters who maneuver around a 3D battlefield.

I actually quite like Midnight Suns, and I’ve been having a lot of fun with its epic battles and my ever-shifting roster of magic-infused heroes. Still, I can’t help but feel sorry for Firaxis: in the choice between Marvel Snap‘s six-minute battles and 200-character collectible roster, against Midnight Suns‘s 60+ hour campaign and Discount MCU sensibilities, I fear most players are going to land on the former.

Our review of Splatoon 3, developed by Nintendo. Available now for Nintendo Switch. WHAT IS IT? The third in the […]