Hoodo Hersi is a Toronto-based comedian whose comedy can be seen on Just For Laughs, the Winnipeg Comedy Festival, Halifax Comedy Festival, and the BBC. She also had the great fortune of opening up for Hasan Minhaj, Lil Rel Howery, Chris Redd, Gina Yashere, Moshe Kasher, and Maria Bamford among others.

In 2019, Hoodo was selected as CBC’s 15 Comics to Watch and was part of Sephora’s national “Get Lippie” lipstick campaign in partnership with Fashion Magazine, where she was profiled as one of the three Female Comedians Taking Canada by Storm Right Now.

But her biggest accomplishment so far is that her therapist thinks she’s funny. 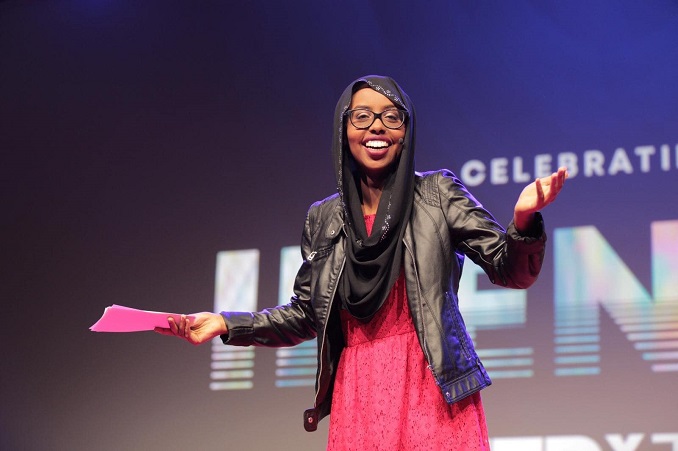 Observational I like to focus on those juicy topics that everyone likes – race, and religion. But, this is a big but, I do make fun of myself on stage. I think it’s important to poke at yourself as a stand-up before making fun of anything else.

Chappelle, Rock, Wanda Sykes, Kathy Griffin, Chelsea Handler…Honestly, there are so many but I can’t forget Joan Rivers. She was relevant well into her 80s. She always looked glam and had such an insane work ethic. Such a shame that people always refer to her as a “female comedian” and reduce EVERYTHING she’s done to her gender because she was a great comic period. The end!

Chappelle, Rock for sure. I always loved watching Chelsea Handler on her late-night show.

Oh my God so many – Ali Wong, Trixie Mattel and of course Jonathan Van Ness who is someone I love dearly – just radiates pure positive energy!

Love doing my makeup with some dramatic eyeshadow and putting together a great outfit. It’s one of those things where if I look my best (even if I’m having a horrible day) I can trick myself into having a great one. It’s the eyeshadow man. All shadow.

In terms of cities, I love London (UK one obviously haha), San Francisco and as for venues, of course, Comedy Bar in Toronto. What a gem of a place.

My Muslim ban joke about how if we’re gonna ban Muslims from America, then let’s do the same for white guys going solo to Thailand. Great twist no one sees coming.

I guess social media and going to actual shows.

Got some things in the pipeline I can’t talk about so just follow me on all platforms or my website (I even bought the misspellings so if you mess it up, you’re good!).

I LOVE Ben Sosa Wright! Another person who has this infectious energy on stage! I also love Surer Qaly Deria. She’s such a great joke writer and makes me laugh so damn much. If you’re reading this, you should follow them! It will be the best decision you make today.

With influences in both music and comedy, Toronto-based comic Abbas Wahab pulls from his real-life experiences when writing his comedy. […]

Moe Ismail is a Toronto-based Stand-up comedian. His material is drawn from his experiences as an Egyptian immigrant and various […]