Having improvised across Canada for over a decade, the comic Hannah Spear holds multiple nominations from the Canadian Comedy Awards and a win for Best Actress from the International Academy of Web Television. We had the chance to catch up with her about her influences, projects, and comedy style. 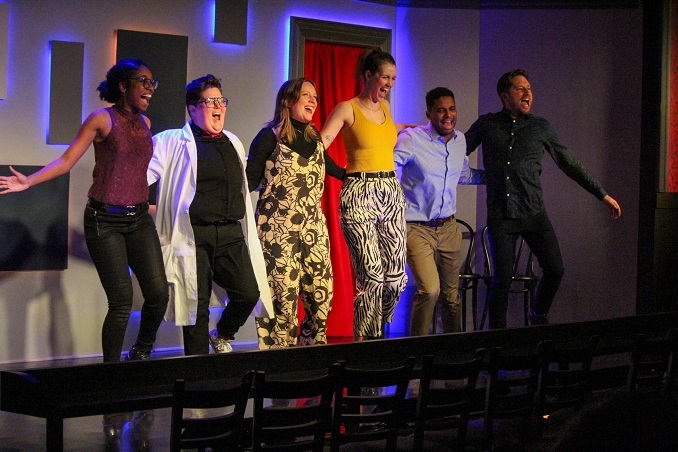 I didn’t have a favourite comedian, really. However shows Little Britain and Black Books were regular viewings as a preteen.

So many talented folks out there. Bo Burnham is definitely a favourite at the moment. Watch INSIDE!

The closest thing to a pre-show ritual I have is my subway commute to work with pump-up music blasting in my headphones. Lately loving new albums from Amine and Mitski!

What is your favourite place you have performed?

I performed at the Kennedy Centre in Washington D.C. once. That was cool.

I co-created a structure for an improv scene for our last revue (the 85th) at the second city, called Psychic Twins. Tricia Black and I developed the idea from an actual visit we had with a “psychic” on Yonge street. I’m proud of it because it is completely spoken in one voice from top to bottom even though it is fully improvised. It is seamless, insanely silly, and when we’re doing it- it feels like Trish and I are operating with a shared mind. It’s very impressive, and yes I am tooting our own horn!

Tik Tok! Comedy Bang Bang! And paying attention to the supporting cast on shows like “I Think You Should Leave”. That’s how I became aware of Patti Harrison, who is a revelation.

What’s the difference between a snail and the 501 streetcar?

Riding a snail would get you to work on time!

*still bowing, gets pulled off stage with large cane*

We just started writing our new revue at the Second City so now is a great time to come and see the show. We’ll be trying new sketch ideas every single night!

Emily Richardson’s tik tok makes me laugh so hard. Sam Hancock is an inspiring force of the future (watch out for ‘A Boy’s Memoir’ coming soon to your internet), and Ajahnis Charley is a sketch and improv shooting star, who’s dancing on HBO’s ‘Station Eleven’ still rattles around in my brain.

Chatting with Kyle Lucey about his comedy and “The Secret Show!”

We’re on the hunt for Toronto’s funniest residents! This week, we spoke to Cathy Boyd to learn more about her […]