The St Andrew’s Society of Toronto, the charitable organization celebrating Scottish roots, history, and culture, celebrated its 185th Anniversary on November 30th, the day that also celebrates the patron saint of Scotland that the group was named in honour of.

Founded in 1836, former presidents of the society include community college namesake George Brown, and George Allan, famed for his contribution to the city of donating his Moss Park land for the creation of Allan Gardens.

The group throws an annual ball, fundraises for local charities, and hosts events like the Learn to Curl Social to promote Scottish-Canadian culture from sports, traditional food and drink, Highland dance, and Celtic music.

The St Andrew’s Society also has a close connection with the legendary 48th Highlanders. The Battalion’s Pipes and Drums have been a mainstay at the Maple Leaf’s home opening game since the early 1930s. Since forming in the 1800s as a battalion in the Canadian Armed forces, the infantry has fought in both World Wars, and continues to serve in world conflicts abroad, and help out during times of emergency at home from their base at the Moss Park Armoury.

The Toronto Archives features many vintage pictures of the tartan and kilted Highland Regiment. A special thanks to Brendan Fyfe for providing background on the St Andrew’s Society of Toronto and their partnership with the 48th Highlanders. Happy anniversary! 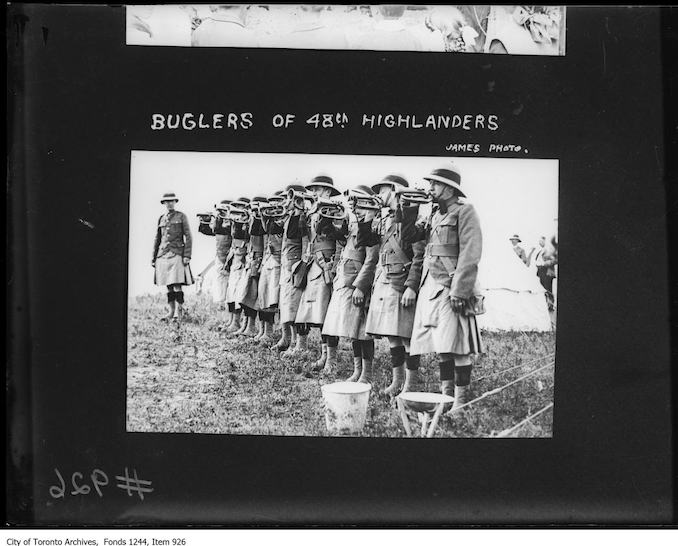 Old photographs of Yonge and Bloor over the years

The intersection of Yonge and Bloor has seen a lot of change over the years. From the constant cycling of […]

Old Photographs of Yonge Street in the 1970s

For our latest curated collection of old photographs, we decided to expand on our images of Yonge street by showcasing […]

Labour Day is upon us and that means back to school for children, teens and young adults. To celebrate back […]