Gary Taxali is one of Canada’s most well-known and successful artists today and although his art is recognizable internationally, he still calls Toronto his home.

I had a chance to chat with the artist prior to the release of his short documentary, Gary Taxali: The Art of Whimsy that premiered during the Canadian Art Foundation’s Reel Artist Film Festival in March 2015 at TIFF Bell Lightbox. This short film premiered prior to the screening of Cartoonists: Foot Soldiers of Democracy on Saturday, March 28th, 2015. 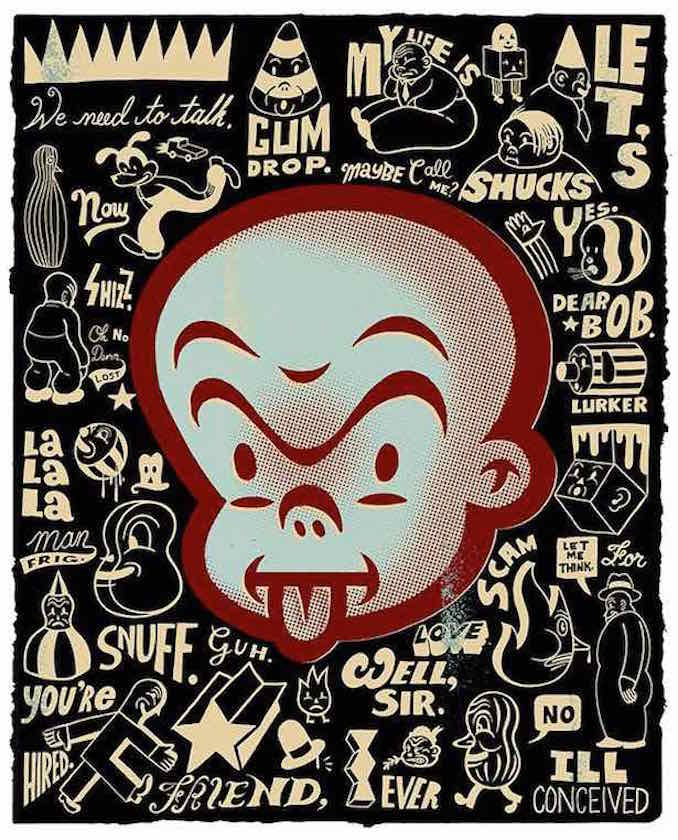 I was approached by producers, Kyriakos Alexopoulos and Ryan Walker about doing a small film on my creative process through their production company, This Is Projector.  They are super talented and I had seen some of their other work and quickly agreed.  They followed me around at various exhibitions, events and in my work space through the past year.   They attended my solo exhibition , “Shanti Town” at Waddington’s in January 2014 and they later came by my studio and shot some additional footage of me working, and interviewed me on my process.  Just recently, the film was completed.  It’s a really nice little vignette on how I work and what my philosophy is on creativity.  They are really good interviewers and did a fantastic job of capturing the essence of my work which is not mainstream or traditional – my work itself is risk-taking which coincidentally is the theme for this year’s Reel Artists Film Festival (RAFF).

2. Telling a story in short doesn’t seem like it’s long enough, or does it?

Less is more.  A little says a lot and the producers were effective in communicating that in this short film.  When the camera is on me I like to be in the moment.  Because it’s documentary style, I see it the exact same way as if I were doing any interview or other press, whether it’s over the telephone or in person with a camera rolling – to me it’s the same thing.  Kyriakos came into it after having done a lot of research on me and my work.  He asked terrific questions and incited great dialogue, so it felt like more of a casual conversation than an interview.  I felt very natural and I hope that comes across in the film.

3. As the subject of the film, we get a sneak peek of your private workspace.  What are your must-haves when you settle into your work?

When I wake up the first thing I do is meditate.  I find that my art flows after meditating and I am in a creative zone.  Music is a must have for me in my studio.  I need to have something playing to lull me into the zone of creativity.  Most often, it’s 1930’s and 1940’s Mississippi Delta blues, which is my favourite music to listen to while I create.

I also need to have a quiet space, in the sense that I don’t answer the phone, check my e-mail, or any other form of technological communication while I am up in my studio.  I can’t be reached, unless I have my cellphone with me and choose to be reached.  I love that kind of solitude.

Lastly, a variety of art supplies has to always be ready at the helm, since I like to grab different things and work with them in a spontaneous manner when I’m doing my mixed media work.

4. Your work has touched many facets aside from traditional media, from murals, books, toys, magazine editorials, advertising, men’s accessories, etc… what would you love to work on next?

I’d like to work on public installation projects.  I have created small sculptural pieces and would love to see them large-scale around the City.  the City already has my art on traffic signal boxes through the StART program and would love to do more of that.   Animation and more fashion are also on my list.   I don’t like to consciously think too much about what projects pop up – sometimes someone will call and have a great idea.  A lot of the projects I’ve done have been really fun surprises.  I’m open-minded, and I think that openness keeps things exciting and keeps me on my toes

5. Any vices?  What’s your kryptonite?

I have a few.  Chocolate has always been a vice for me.  I love eating it, and I’ve even drawn it in my work in one form or another.

I’m a big fan of Adam Sandler movies.  I really enjoy his films; I’ve seen them all.  I’ve even done a portrait of him once for Rolling Stone magazine.  They contacted me and asked me if I would be interested in doing it, and as someone who doesn’t do a lot of portraits, at first I was hesitant.  He doesn’t have a particularly easy face to draw, and because I don’t draw faces a lot, I was unsure about accepting the assignment.  Nonetheless, I took it and I think the result was pretty good.  I think I captured a really good likeness, and it’s one of my favourite illustrations I’ve done to date.

Music is a huge vice of mine.  I buy music all the time, and love going record shopping.  It’s very meditative for me.  I’m a long-time fan of music.

6. Speaking of music, what’s on your playlist?

I love old blues music, as well as 1960’s garage punk music and rock and roll, and blues based garage punk.  These days I’m listening to a lot of really old classic jazz by people like the Dave Brubeck Quartet.  I saw Dave Brubeck many years ago and I really enjoy his music.  I also really love the German group CAN, which is an early 70’s psychedelic progressive rock band.  I love listening to the music of my friends; like Aimee Mann and my friend Holly Golightly, who is actually coming out with a new record.  She sent me a few of the tracks and they are really fantastic.  Danko Jones just came out with a terrific new record as well.  Honestly, I have a pretty extensive playlist and I love knowing it’s always ready at the helm.  I DJ sometimes and find that DJ’ing is a creative process just like art.

7. Do you have one piece of art that you’ve created that you just can’t let go of?

I have never created anything that I can’t let go of.  I don’t have an attachment to the work I create, I have an attachment to the process.  I think there is a big difference between the two.  As soon as I’ve made a picture and archived it, it’s done.  I don’t need to look at it and be around it,  I’m too concerned with making subsequent pictures.  In addition, because I make my living at this stuff, I would rather it go into the hands of collectors, businesses, or galleries, than for me to keep it.

Having said that, there is one piece I created that I am extremely proud of.  I was commissioned by OCAD University to create their 100th GradEx limited edition print to raise money for the school.  OCAD U has been having their annual graduation exhibition for 100 years and it was an honour to be asked to create the commemorative limited edition print.  They are being sold for $100 plus tax and there are a few that are  $1000 plus tax for a “gold” version.  I don’t keep a lot of my art but this is one piece that I definitely want in my collection.  You can get more information here: www2.ocadu.ca

8. The one that got away, that you wish you’d kept?

There is nothing I’ve done that I wish I had kept, I don’t think like that.  Perhaps there are a few pieces that I look back at in reproductions and in books, and I think, “wow, that’s a really interesting bit of texture or design.”  In those cases, it would be nice to look at the original again just to get the wheels turning, from an artistic point of view.  However, I really don’t have an attachment to my work.  When I finish something, I put it out into the world and hope people enjoy it.

I’d love to go to Memphis, Tenessee.  I’ve been asked to give a lecture in Nashville, and when that happens I will certainly make the trip to Memphis.  I’ve always wanted to go there.  I’ve been to the Southern United States a few times, but I would love to do a road trip through the United States, in particular the south. As I’ve mentioned, so much of the music I listen to is from the Southern United States, and I would really love to visit some of these places.  There are also a lot of really great American folk artists from that region, and I would love to see where they came from.

10. What makes Toronto great for you?

The people.  My colleagues who are artists and designers are really talented. Torontonians are very patriotic and proud of their city.   I really saw this when I designed a Toronto-themed pocket squares available exclusively at Harry Rosen.  I love that we are proud of our city and we do have a lot to be proud of. However, I think the city needs to catch up with the times when it comes to art.  It’s a bit behind in the art world, which has nothing to do with the talent pool and more to do with the gallery scene.  It’s still a very insecure, young city in that sense.  Toronto is a mature city that isn’t acting its age.  I think it needs to grow up a little bit and express a bit more of its own identity and stop staring at what is happening elsewhere in the world, particularly New York and Los Angeles, and honour its own.  Even though my upcoming exhibits in 2015 are not in Toronto, Torontonians will still make the trek to come see them. My next one is in Cambridge, Ontario at Idea Exchange (design and architectural public art gallery) connected with the University of Waterloo this July 2015 and then I have a solo show in November 2015 at Jonathan LeVine Gallery

Having said that, I see the City of Toronto through their Street Art project and the Canadian Art Foundation with new President and CEO, Jill Birch,  taking new leaps of faith to change that perception.  I am excited for what the Toronto art scene has to offer in the future and am optimistic that we’ll see a change.   My neighbourhood is also really terrific.  I live in a Portuguese neighbourhood in the Junction.  The diversity is one of the best aspects of living in Toronto.  I think most people feel that way, and that makes me really proud to call Toronto my home.

Watching the Apocalypse: A Retrospective

As life under lockdown takes shape for most (though not all) Canadians, jokes about Netflix binges have given way to […]

“A Day in the Life” with Cree actor Samuel Marty