When the Park Hyatt Hotel in Yorkville reopened the doors this past September we were very interested to see how they would retain the rich history while progressing forward. The welcoming aesthetics of the newly renovated space offered an optimistic point of view. Walking into, or through, the hotel’s signature restaurant, Joni, and your eyes are drawn to the space that wraps you into its nest.  Soothing, layered lines draws you in and softens the eye as you can’t help but look upwards. On one end it’s anchored with an inviting fireplace. The other end is a contrasting staircase that you could say, rises to the occasion. The stunning long bar is a welcoming space for more casual drop ins and glass cases with contemporary ceramic works by Canadian artists (on loan from nearby Gardiner Museum) help to tie-in the overall feel. Joni is breathtakingly beautiful and sophistication at its finest.

In 2017, the hotel began an extensive renovation and the pandemic offered time to fine tune details and now it’s ready to welcome the world once again. But this wasn’t the first major worldwide event that challenged the hotel. The first iteration faced delays opening during the Great Depression until it was able to finally open its doors in 1936. Then known as the Park Plaza Hotel it attracted notables, dignitaries and well-heeled travellers to its inviting spaces…and it still does. Ask particularly older Torontonians what they know about this hotel and you’ll learn about how the hotel drew in creative types and literary giants over the years. Pierre Trudeau, Mordecai Richler, Margaret Atwood, and Leonard Cohen are among familiar names who have left memorable impressions. You can understand why, especially when you visit the 17th floor Writers Room, the hotel’s tucked away bar with a sweeping view of the city’s skyline. Over the years, the hotel has also seen more than it’s fair share of Hollywood a-listers and other celebrities. Christopher Plummer, Burt Reynolds, Pierce Brosnan, Duke Ellington, Jennifer Aniston, and Jessica Alba were known to have visited.  The iconic luxury hotel has also been a sought after venue during peak film festival season and has been a fixture in the area retaining its premium location at the north west corner of Bloor Street West and Avenue Road.

On our most recent visit to the landmark hotel, we checked into both Joni Restaurant and the Writers Room. We met with Executive Chef Antonio Soriano and his team to learn what exciting things have been happening since the doors opened (finally) this past September.

Joni, could very well be a nod to the famous singer Joni Mitchell who was known to have frequented the area in her informative years. It would be a reasonable assumption given Yorkville’s history of being a hotbed for creative types in the 1960s– musicians, poets, artists, and writers. It was a bohemian village that was the epicentre of Toronto’s arts and culture scene. Eventually the area evolved and became the high end dining and shopping destination we are more familiar with today. 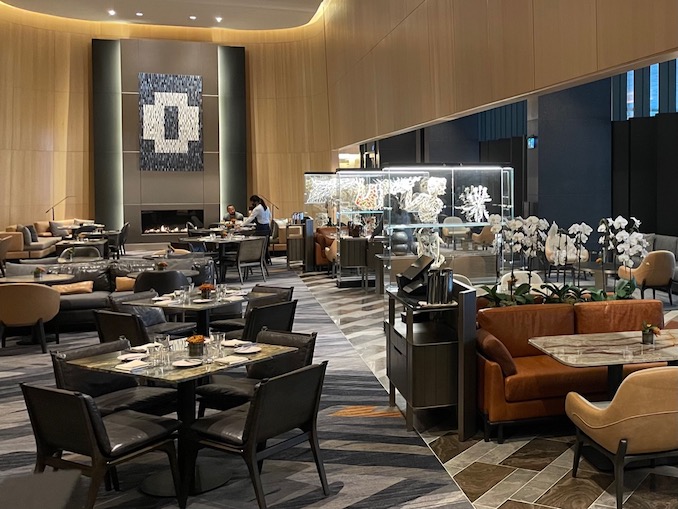 Soriano’s eyes were filled with joy when we met in person at the newly opened Joni restaurant designed by Studio Munge. His warmth towards our city comes from his heart. He’s excited to show Torontonians and visitors his love for our city. He tells us about how his journey had led him to our city.

Soriano started his career in Buenos Aires where he studied and then began working in various high-end restaurants. He moved to Paris and earned the prestigious Le Grand Diplome at Le Cordon Bleu. From there he continued in Paris working in various Michelin star restaurants including Alain Senderens 3 Michelin Stars “Lucas Carton”, “Les Ambassadeurs” (2 Michelin Stars),  Hotel de Crillon, and the Georges V restaurant “Le Cinq” (3 Michelin Stars). Then returning to Argentina he became the Executive Chef at “Algodon Mansion” (Relais & Chateaux). In 2013, he decided to open his own restaurant “Astor Manduque Porteño” to much success and praise. But it was a time of transition when Soriano was moving his restaurant to a bigger location, with mere weeks before opening, he received a call from the Park Hyatt asking him to join their culinary team as Executive Chef at the iconic Park Hyatt Buenos Aires — Palacio Duhau. It was a position that wouldn’t come around often so he knew he jumped at the opportunity with such a highly reputable and established brand. He thought it would be a fun move, and it was. “It was amazing,” said Soriano. He also had the opportunity to move around on various missions at Hyatt properties including exclusive dinners in Paris.

Then, Soriano had an eye on Toronto. Why? He explains that there aren’t that many opportunities to open up a high end hotel especially in North America  and he recalls coming to guest chef at a festival in Montreal in 2013 and fell in love and was interested in learning more about the country.  “The stars aligned,” he said. Soriano arrived in Toronto in November of 2019 in the middle of a winter storm.

To say his current role in Toronto is a perfect match is an understatement. When he first arrived in our city, he was eager to explore the culinary scene here. “Toronto is one of the most underrated cities that I’ve ever been to,” says Soriano. We joked as we congratulated him on surviving two winters already here and under one of the strangest times in history. “I love [Toronto] in every sense.” The concept for the restaurant was inspired by the city and neighbourhoods.

“There’s a way of cooking for me. We get the best products, that’s not magic but I when I saw this place and after living in Buenos Aires and Paris, you feel the multiculturalism that is the spirit of the city. You can live here and be whoever you are. There’s a deep understanding about how we can make the city and society better together.”

He goes on to explains when it came down to translating that feeling in food, he reflected on his own heritage and background. He was born in Lima, Peru and his family spent time in Paris but then he went back to Argentina and grew up there. His grandmother was Indigenous Peruvian. His heritage is French but he doesn’t have a French name. “I was not really belonging anywhere but I felt that he belonged everywhere,” said Soriano. He feels that Torontonians can relate.

But just as he was getting more familiar with Toronto the world pressed pause and everything shut down. Silver linings? The time offered him the chance to really explore and research all aspects of what he wanted to do at Joni. Yes, working with local producers and farmers is what many chefs can toot about but Soriano and his incredible team of chefs including Jonathan Williams and Sarah Tsai were interested in also fostering long term relationships with who they wanted to work with. Soriano also is very passionate about sustainability in the ingredients he brings into the kitchen – and if you pay close attention these are not after thoughts but very much part of the creative process. Call it a full circle of life philosophy in his cooking techniques.

So, what’s on the menu? Soriano’s love for the diversity in this city is the inspiration here at Joni and envisioned without borders. Dishes that may seem familiar take on elevated and unique interpretations worthy for travellers and locals.

“With this restaurant, I really wanted to honour what Toronto is at heart. I also wanted to honour this neighbourhood, Yorkville and the life of the 60s and 70s that was a place of art and movement,” said Soriano.

Modern Tapas with Eastern Mediterranean Cuisine at 70 Down in Yorkville

Toronto is filled to the brim with fantastic foods from across the world. I live amid Little Portugal, there is […]

Local’s guide on where to eat during TIFF

The Toronto International Film Festival (TIFF) is many things to many people. It’s a time for film buffs be one […]

You have to love a patio, you really do. One of the saddest things about winter in this great city […]