Our review of No More Heroes III, developed by Grasshopper Manufacture. Available now for Nintendo Switch. 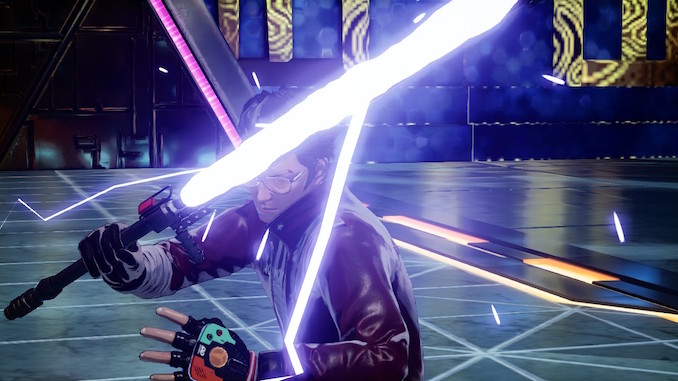 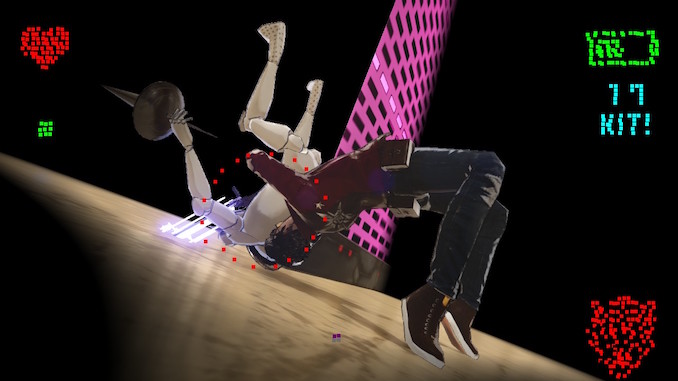 WELCOME TO THE GARDEN OF INSANITY

The first thing you see upon booting up No More Heroes III is an anime parody of E.T., called FU. It’s a terrible/awesome joke (one, incidentally, that I’ve been making for years), but it’s also indicative of what’s to come: a mix of low humour, fourth-wall-breaking satire, and an endless litany of pop culture references. Indeed, it only takes about sixty seconds of FU before you’re thrown into an 8-bit action game, the first of many genre changeups that shakes up the NMHIII experience.

If you’ve played any Suda51 games before, none of this will be a surprise. And if you’ve never encountered Suda51 before? Well then buckle up, it’s going to be a hell of a ride. 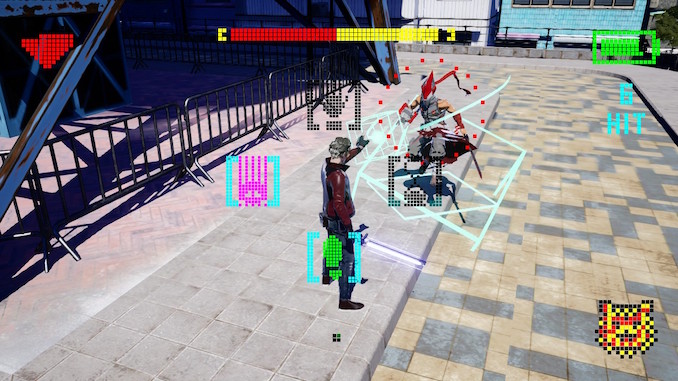 Suda51, real name Suda Goichi, is that rare breed of artist: so finely attuned to (and so enamoured with) the conventions of his chosen medium, that he’s free to mess with it any way he pleases. NMHIII certainly looks like a traditional video game, but its off-the-wall sensibilities, constantly shifting genres, and general throw-shit-at-the-wall-and-see-what-sticks attitude makes it unlike most anything else on the market.

At its core, NMHIII is a third-person action game in the Devil May Cry or Bayonetta vein. Players control Travis Touchdown, a foul-mouthed, lightsaber-wielding, otaku assassin, who must climb the “Galactic Superhero Rankings” by taking on a series of ten boss fights.

Combat remains satisfying as ever in NMHIII. Your off-brand lightsaber is enormously entertaining to wield, and the game is quick to teach you techniques like a slow-mo dodge and various “Death Skills” triggered with the tap of a button. NMHIII also rewards the aggressive player; by relentlessly attacking, it’s possible to stagger foes, replete with Street Fighter-style stars circling their head, opening them up for a damaging wrestling attack.

The “Death Blows” of the original No More Heroes are also back: once an enemy’s health is depleted, you deliver the final blow through either a shake of the controller, or by flicking the joystick in a given direction. It’s satisfyingly tactile, and, in its own way, oddly beautiful, your foes exploding into a thousand technicolour pixels each time. And yes, NMHIII brings back another No More Heroes mainstay: the mildly annoying, but still amusing, necessity of recharging your lightsaber mid-battle by frantically shaking your controller. Just as Obi-Wan Kenobi always intended.

As for Travis’s penchant for shouting out the names of random berries mid-battle, I… honestly have no idea. 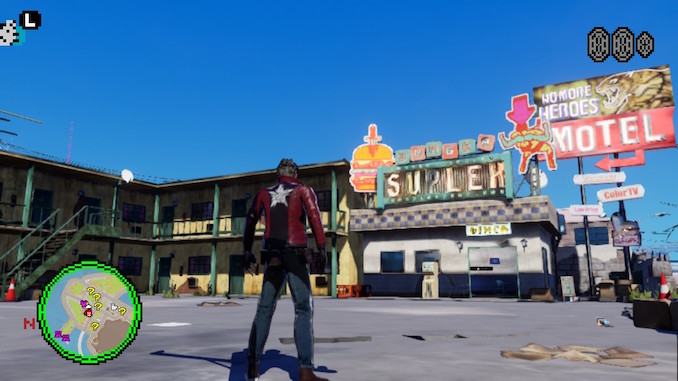 Bosses have always been the main draw of the No More Heroes series, and NMHIII does not disappoint. Each boss is wholly unique, with their own (usually bonkers) backstory, fight style, and bespoke gameplay mechanics. One moment, you’ll be going lightsaber-to-lightsaber (technically, “beam katana” to “beam katana”) with a Lady Gaga-style popstar, the next you’re fighting an adorable pink squid that screams “ADRIAN!”, over and over. Still another boss goes by the nickname “Chair Girl” – no, not that one – and her entire fight consists of an epic game of Musical Chairs. Like I said, bonkers.

It’s outside the boss battles where NMHIII somewhat falters. In order to unlock each boss, Travis must complete a series of “designated matches”. But instead of a series of levels, Point A to Point B, Travis just wanders the open world, looking for match icons to activate. Step into one, and you’re dropped into one of the game’s handful of generic environments – a parking lot, a warehouse, that sort of thing – to face off against a random assortment of enemies. These battles are not boring, exactly, but they do get repetitive: there’s only so many times you can suplex the same dimension-bending alien before it gets old.

Additionally, NMHIII has you grinding out currency through side missions, most of which involve hilariously menial tasks like mowing lawns or unclogging toilets. They’re so silly it’s hard to get mad at them, and occasionally you do run into something more interesting, like taking on waves of kaiju storming the beach at Normandy, or taking on an enormous space station from the seat of your Gundam-style mech. Is that Suda51 enough for you yet? 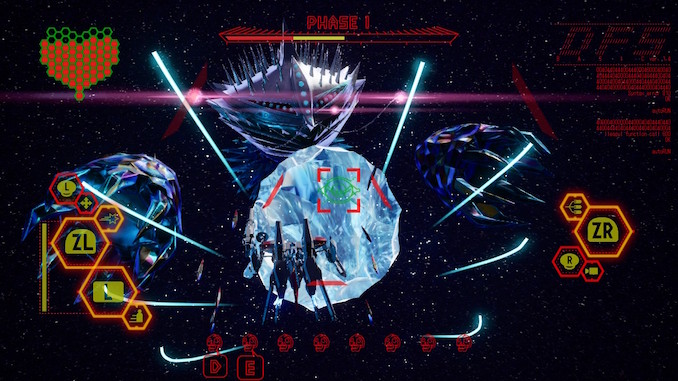 I love how indebted No More Heroes is to pop culture. That includes NMHIII‘s insistence on movie-style credits for the opening and closing of each of the game’s ten chapters, corresponding to its ten boss fights. But it also extends to its many homages, parodies, and geeky references. I hesitate to spoil anything, but the fact that Travis spends the entire game sporting a JoyCon like a Power Glove is one of many sly nods that made me laugh. (As did the multiple sound effects ripped straight from classic games like Sonic and Super Mario.)

Meanwhile, the game’s frequent interludes include references to visual novels, anime, and, in a recurring bit, Travis’s obsession with the oeuvre of Takashi Miike. Miike, the punk rock icon of Japanese cinema, is such an obvious draw for No More Heroes, it’s frankly a surprise Suda didn’t bring him in sooner. 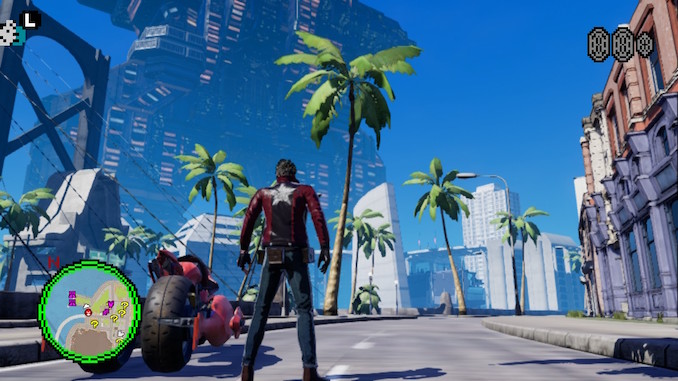 NMHIII is both welcoming and alienating at the same time. On the plus side, real effort has gone into explaining the game’s varied mechanics, for example by carefully explaining the new controls each time the gameplay switches up. It’s also generous with player rewards – at one point, a character just straight up hands Travis three of his most important abilities, Suda51 obviously delighting in short-circuiting the traditional upgrade tree.

From a narrative perspective, however, NMHIII can be inaccessible. Though it’s been eleven years and two console generations since No More Heroes 2, this latest entry expects players to remember everything that happened in the Wii originals, not to mention the bizarre Travis Strikes Again spinoff. I’m a No More Heroes diehard, and even I had trouble remembering much about characters like Shinobu or the Harley Quinn-alike “Bad Girl”, both of whom play central roles here.

NMHIII occasionally loses me in other ways as well. In keeping with a proud Suda51 tradition, navigating the open world remains a real chore, with so many invisible walls that it honestly feels like a joke on Suda’s part. The (deliberately?) choppy graphics also hearken back to the Nintendo Wii in a way that’s disappointing, if oddly nostalgic.

But you know what? That all comes with the territory. Suda51 has never been one to abide by the laws of gaming, and I wouldn’t have it any other way. I still think Killer7 is his masterpiece – it remains, to this day, the best of the postmodern video games – but I’ve always had a soft spot for Travis Touchdown and company.

Thank goodness, then, for Suda51, whose every work is the antidote to the mass-produced drivel that floods the gaming market. Thank goodness, too, for a publisher (kid-friendly Nintendo, of all companies!) willing to give Suda a home for his manic, puerile, brilliant, zany, profane, and altogether off-kilter masterpieces. If No More Heroes III truly is Travis Touchdown’s swansong, as Suda has suggested, then it’s a hell of a note to end on. And if Travis does come back in some other form – a Miike film adaptation, perhaps? – then please pump it directly into my veins. Suda51 wouldn’t have it any other way.

Visit the official page for No More Heroes III here.