Adapted from the critically acclaimed novel by Catherine Hernandez, SCARBOROUGH is an unflinching portrait of three low-income families struggling to endure within a system that’s set them up for failure. It shows the love and perseverance communities can foster, lifting up families to overcome the obstacles placed in their way. The film by Shasha Nakhai and Rich Williamson will premiere at this year’s Toronto International Film Festival under the Discovery and TIFF Next Wave programmes.

Kristen McCulloch, an award-winning Toronto-based actor, plays Jessica, an unmoored woman dealing with addiction issues and a cycle of neglect. She is unfit to adequately care for her daughter.

Can you tell us more about the role you have in this feature film as Jessica?

KM: The story is anchored around three kids from low income families who are navigating poverty, addiction and housing instability. My role is Jessica, the devastatingly neglectful mother to Laura, who is unable and unwilling to care for her daughter. She has had a hard life and she’s drowning as the disease of addiction is overtaking her. In Scarborough we see her struggle to keep going but drug addiction is nearly impossible to emerge from once it’s claws are so deep. She’s as much a victim of society’s failures as anyone we see in the film.

KM: By the time we meet her, Jessica has no nurturing or motherly impulses and when she is forced to deal with her daughter, it is a burden. Sadly for Laura, brought to life masterfully by Anna Claire Beitel, she is last on the list of Jessica’s priorities and spends most of her time hungry and alone. Her teacher, Ms. Hina, plays an important role in this film.

How does she help your character or the daughter?

KM: Ms. Hina runs a morning school program where low-income children come together and she is instrumental in helping them navigate the ups and downs of life and community in a system that is failing them. Her devotion and commitment to the children offers us hope for wee Laura and all of the families we meet during the course of the film. This story takes place in a well known suburb of Toronto.

What did you learn about the area that you didn’t know about before working on this project?

KM: It was lovely spending time in Scarborough! The Bluffs are stunning and the communities welcoming. The most delicious thing I learned was about the friendly Jamaican patty rivalries between Warden (two shops!) and other subway stations. Not so much rivalries I guess, something more along the lines of the age-old debate over which is the better patty. I’m no expert but I’ll throw my vote in the Warden Station camp, those patties were fire! 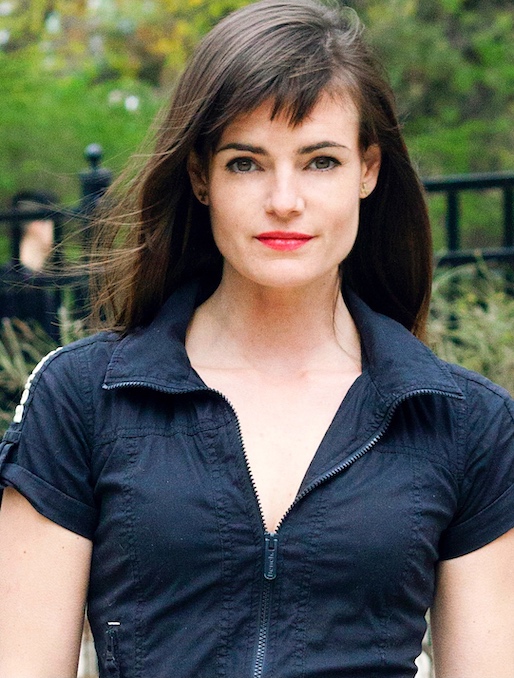 What’s your most memorable TIFF moment?

KM: At the moment we are just getting started so the most memorable bit this year so far has been finding out we’d be having our world premiere here at TIFF! I was in the middle of nowhere in the mountains of British Columbia, completely off the grid. Somehow a message came through on a cellphone in the middle of the night from one of the directors, clearly elated, saying that it wasn’t announced yet but we were headed to TIFF!! It was extra surreal because I should’ve been unreachable and I was half asleep so for a brief moment I wondered if I was dreaming. Then the same text came through twice more and I knew it was happening. It took a long time staring out at the stars to fall back asleep. The next morning I ended up racing to the nearest town to congratulate everyone, it was a really happy day.

Are you planning on checking out any films this year?

KM: I’m freaking pumped to watch Night Raiders. I live for genre films and this one from female Cree-Metis director Danis Goulet sounds like it’s going to come howling out of the projector like a dystopian First Nations anthem. You’ll most often find me out for the Midnight Madness screenings so ‘Saloum’ from director Jean Luc Herbulot and ‘Titane’ from Julia Ducournau out of France as well as ‘You Are Not My Mother’ from Irish director Kate Dolan are all at the top of my list. Fingers crossed I can nab some seats!

What else are you working on that you can share with us?

KM: At the moment I have another film called ‘Motherly’ that’s just beginning it’s festival run. It’s an isolation thriller and in it I play an angry, grieving woman bent on revenge. Definitely keep an eye out for that one, it’ll be watchable in a few places over the next few months. Another one to watch for early next year is ‘Sorry About the Demon!’ It was just announced so I can’t give up much in the way of story just yet. I can tell you that it’s the second collaboration between Emily Haggins and Paper Street Pictures, their first being Scare Package which is an absolute riot. This will fall into the same genre of horror-comedy and stars Jon Michael Simpson who is effortlessly hysterical, so we are in very good hands.

SCARBOROUGH is also an Official Selection Film as part of the TIFF RBC Emerging Artist Series. Screening dates and times at the Toronto International Film Festival can be found here.