There is so much to know about the ocean’s most majestic creatures and the Royal Ontario Museum has opened up recently with a brand new exhibition dedicated to the Great Whales from Canada’s coasts. Great Whales: Up Close and Personal offers visitors a deep dive into the the underwater world that continues to amaze us. 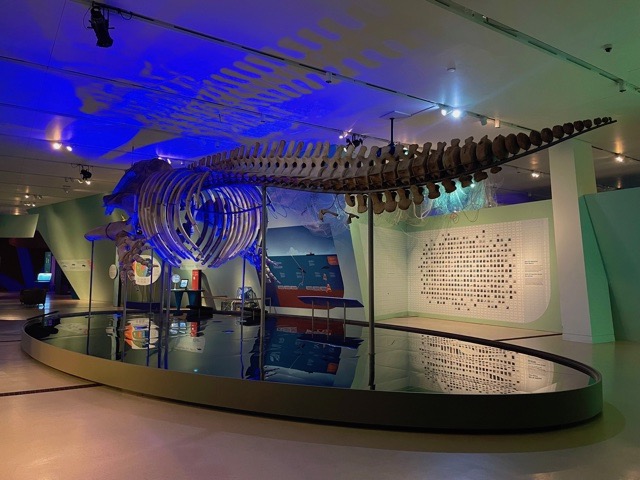 The entire exhibition isn’t about a straight line of  progression from prehistoric whales to modern day whales, here we are richly rewarded with recent findings when it comes to the evolution and diversification of the species. The exhibition presents conversation inspiring topics including the evolution, the life of a whale from birth to death, what happens to a whale after it dies, their relationship with humans, and and conservation efforts.

The first section is an introduction to whales and talks about how the Royal Ontario Museum became involved in the research. Then, the focus is on different whale species that are common to the Canadian coasts. “There are many species of whales and what we’re showing is pretty diverse,” said Mark Engstrom, Lead Curator of the exhibition. “Here we picked five major lineages of fossil whales and offer a closer look at well documented ones from each group.”

There are three life-size skeletons on display in this exhibition: the blue whale, sperm whale and the critically endangered North Atlantic right whale. Included in the exhibition are multi-sensory interactive experiences. 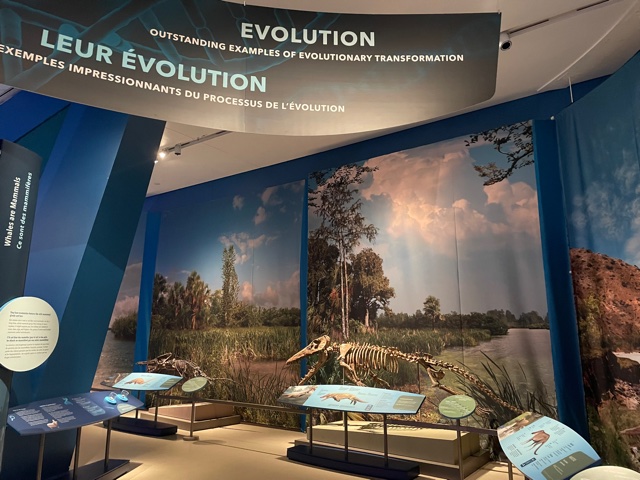 “One of the reasons we wanted to do a Great Whales exhibition was to talk about the differences between toothed whales and baleen whales. For example, we explore the sperm whale, which is a toothed whale, and how they are related to dolphins and porpoises. Then, there are the baleen whales that are a smaller group but  includes some of the world’s biggest whales and they have a very different evolution.”

And the story of evolution is fascinating. If you think all whales have evolved in the water, you may be surprised that DNA discoveries have pointed toward some species evolving from hoof land animals. Engstrom mentioned about Darwin’s thoughts on the evolution and how he was laughed at for his hypothetical ideas. In the exhibition we can see that he wasn’t far off. Large teeth? Hindlegs? And what about the blowholes?

“Hind legs were discovered and were reduced and lost pretty early but the Dorudon, which is related to the modern whale still had the hind limbs and it was fully aquatic whale and examples are shown in this part of the exhibition,” said Engstrom. “And then you see things like the blow hole which is on top of the head on whales. That’s actually a fairly recent phenomenon.” 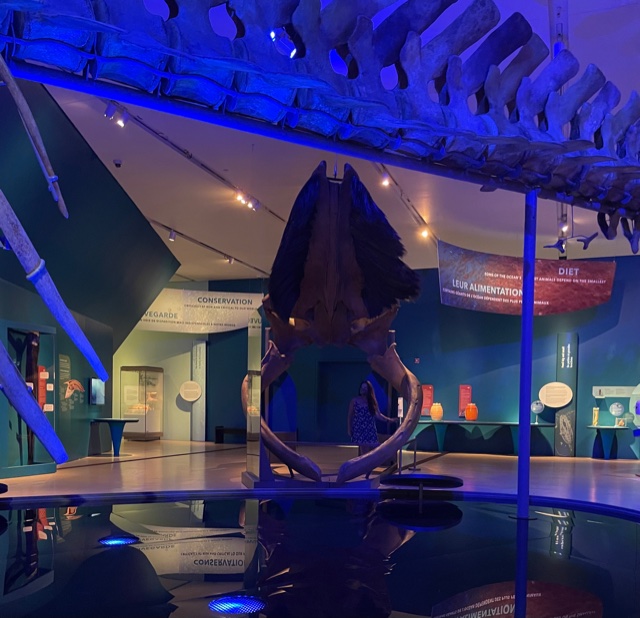 Another part of this exhibition focuses on how the whales consume their food.  A toothed whale tend to dive deep below to feast and finds prey by echo-location. As this whale gets closer to its prey it increases the clicks, likened to sonar, to pinpoint the prey in the darkest waters. A sperm whale, for example, can dive 3000 ft deep or more and will use this skill and they feed a lot of squids and octopus.

Baleen whales are shown with their bristle like filters instead of teeth that are made of keratin much like our hair and nails. In the whale’s mouth they are arranged almost like plates located inside their mouths on the upper jaws and act like sieves to help filter prey. They feed very different from the toothed whales. Engstrom explained that the Blue Whale, for example, has a pleated throat almost like a pelican. They can get a good feed in one scoop full and able to sift through feed using their baleen. Engstrom tells us the whales would do this several times a day and get enough that they can go a while without eating if there’s no food available. The Humpback whales out west have a different feeding strategy by blowing bubbles causing schools of herring to cluster into a tight ball and thus making feeding more efficient in one big gulp.

To gain an understanding about how impressive and grand this is, visitors can walk into the jaws of the whale skeleton for an ideal photo op. Around the corner visitors will also find a life-size preserved whale heart on display which was a real attraction when it was on view in the ROM’s 2017 exhibition that shared the incredible journey of nine Blue Whales that died tragically in 2014 in the Gulf of the St. Lawrence. Engstrom led the team of researchers from the ROM and travelled to the location for the unprecedented opportunity with goals of providing research to the global scientific community.  This actual heart has a remarkable story of it’s own as it travelled from Canada to Germany for preservation. If you see Engstrom in the exhibition hallways, ask him about the story. 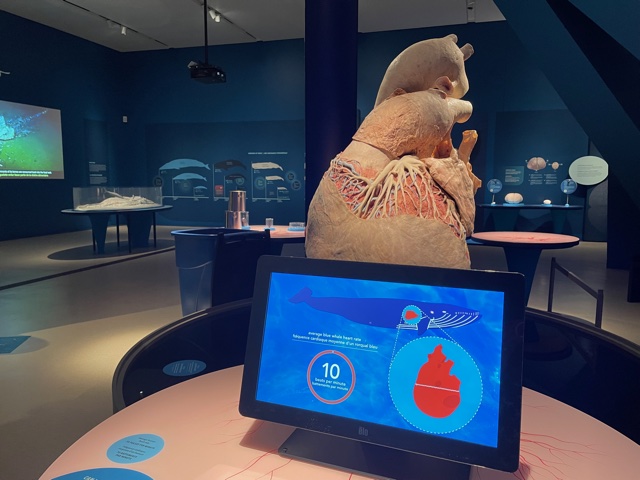 Other features include an extensive look at what happens to a whale after it dies and the decades of service its remains has for many other sea creatures.

An eye-opening display of just how many whales are in existence along the East Coast is also on display. Engstrom tells us efforts are underway to help to get North Atlantic right whale out of the endangered list. There are approximately 300 whale species in the world. Each one is being monitored but repopulating is not easy. He tells us that currently there is a lower female population and coupled with how long it takes for them to mature, and one female can only produce one baby every two or three years, the process is slow. However, things are better along the West Coast.

Conservation is a great part of this exhibition and learning about how global warming has repositioned the great whales into more dangerous and higher traffic waterways has in turn contributed to the mortality rates. There are ongoing efforts happening that can help whales who often get trapped in fishing gear or injured by large ships travelling during the peak seasons.

The new Great Whales exhibition is really grand and offers more insight into the most recent scientific research, but what does Engstrom wish people to know?

“One of the things is the evolution. For me that’s such a great story. If you think about how evolution works and see the evidence here, I really feel that whales have a really great story. They’ve been such a mystery to us and now we can see how the body has transformed over time with such great resources is pretty interesting. But I guess my thing is if someone who is twelve years old and comes through this exhibition, I hope they would realize that science is really exciting and they could not only make a career out of this but also make their mark.” 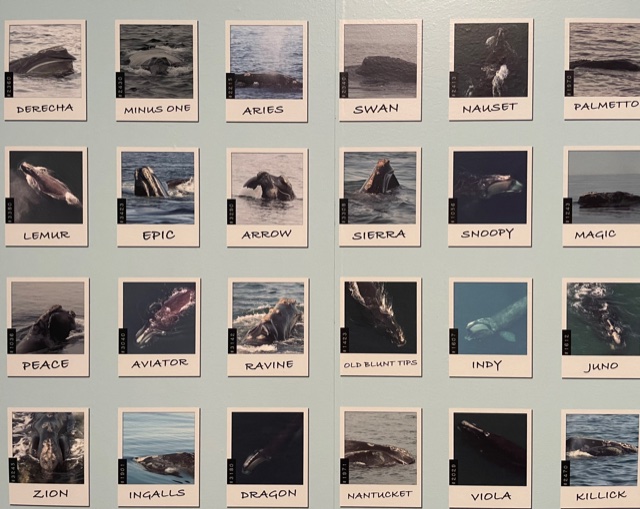 Great Whales: Up Close and Personal (ROM Original exhibition) is now open. Timed entry tickets can be purchased online. Limited number of visitors allowed at any given time during opening to allow for proper distancing. Any hands on surfaces are constantly cleaned by staff. Also check for ongoing opportunities to listen in to guest speakers and other upcoming events virtually. In person events to come as government pandemic protocols will allow. More about this exhibition can be found at www.rom.on.ca.

It’s a month of getting back to routine, slowing down and staying warm. It also means there aren’t that many […]

What to see & do in Toronto during Family Day Weekend

Family Day (February 20) is coming up and it’s a holiday we appreciate and love during the gloomy winter months. If you’ve […]