Our review of Within the Blade, developed by Ratalaika Games. Available now for PS5 (Reviewed), PS4, Xbox One, Nintendo Switch, and Windows. 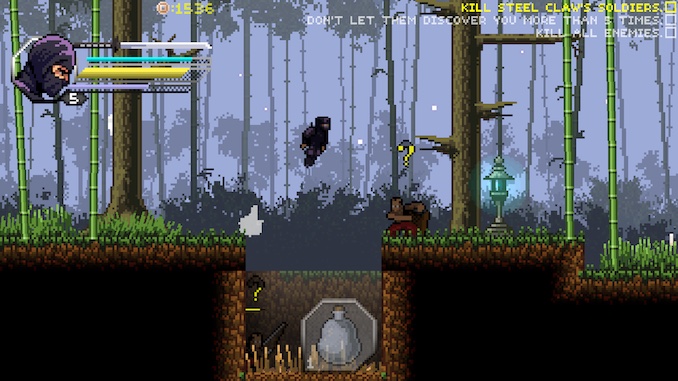 An 8-bit ninja action game with an emphasis on action over stealth.

It would have impressed my four-year-old self; now it’s just sort of neat.

Strider Hiryu and his ilk. 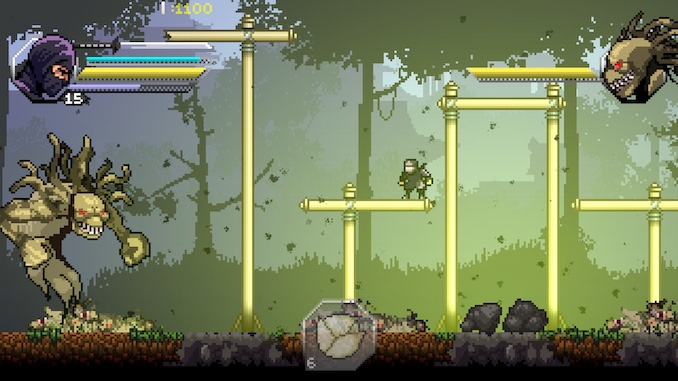 Within the Blade is an ultra-indie ninja action game carrying serious Ninja Gaiden/Mark of the Ninja vibes. Its stylish 8-bit aesthetic harkens back to NES titles of old, but its extremely low-budget trimmings (which help explain its woefully lacking web presence, but also its $14.99 price point) mean this one’s only for the diehards.

I am a sucker for anything ninja. I thought Ghost of Tsushima was the last great game of the PS4 era, and Sekiro: Shadows Die Twice is the only Soulslike I’ve ever completed, and only because I refused to be the ninja who gave up. Strider/Zeku are my go-to players in the various Capcom fighting games. Oh, and I have no less than twelve Ninja Turtle figures (three sets each of comic/cartoon/movie versions) on my shelf, staring at me.

The second I saw Within the Blade in action, I knew it was for me. 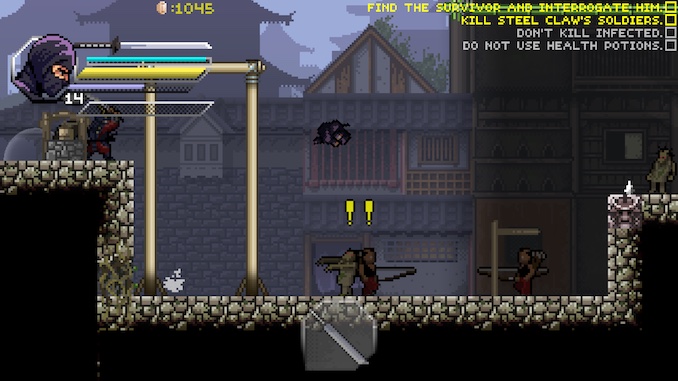 Within the Blade is quick to let you know what it’s all about: your adorable little 8-bit ninja warrior is dropped in the middle of a forest, and a bunch of nasties wielding swords, bows-and-arrows, and other era-appropriate weaponry are out to get you. The game, loosely inspired by historical events, sees your heroic ninja Hideaki, member of the “Black Lotus” clan, commissioned to wipe out the enemy forces that have plunged Japan into civil war, in the wake of the Battle of Okehazama (1560).

The historical Battle of Okehazama represented a major turning point in Japanese history, with the surprise defeat of daimyō Imagawa Yoshimoto bolstering the reputation of his victorious rival Oda Nobunaga. Perhaps you’ve heard of Nobunaga: he would go on to become feudal Japan’s “Great Unifier”. None of that backstory is present here, though: simply a vague reference to the “end of the Shogunate” and the rise of a “Steel Claw” clan conversant in the Dark Arts. What that translates to is a decent enough 2D side-scroller with an emphasis on pixelated violence, nifty ninja gadgets, and monstrous fantasy bosses. 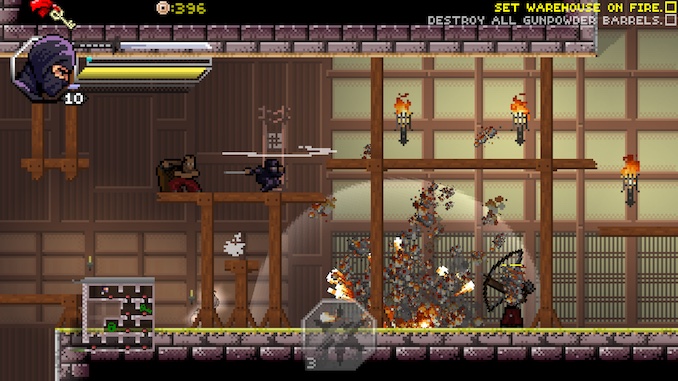 The vogue for retro side-scrollers shows no signs of abating, delivering some stellar titles over the past decade or so, including Shadow Complex, the rebooted Strider, Toronto’s own Guacamelee! and so many more. Unlike those games, however, Within the Blade hews closely to the tried-and-true NES-era formula: striking 8-bit visuals, loose controls, cheap bosses, and difficulty spikes galore.

It does have a few hints of modern design, such as stat upgrades, upgradeable/unlockable weapons, and a crafting system. I hate crafting systems, but oh well. Within the Blade is also grindy: if you’re struggling repeatedly with a given challenge/boss, it’s often easiest to reload an earlier level – there’s no penalty for doing so – and grind out your stats/skills. It’s not so different from, say, Sekiro, but it does kind of feel like content padding. I hate grinding and content-padding, as well. 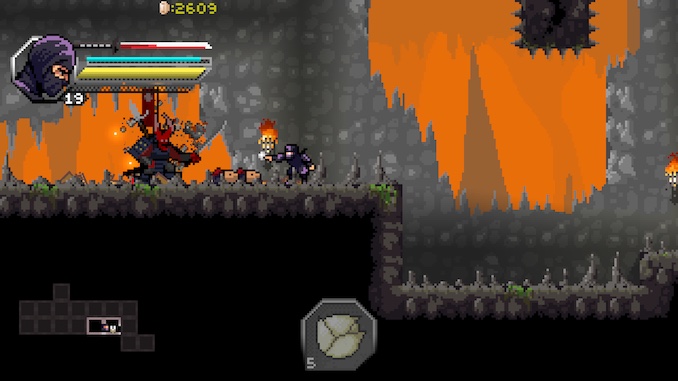 Within the Blade is a mostly pleasant jaunt down Japanese memory lane. It’s a bit more action-heavy than I expected – you’ll be doing a lot of button-mashing combat, rather than skulking in the shadows – but on the whole it’s fun to fool around in. Protagonist Hideaki is certainly one of the coolest looking 2D ninjas I’ve seen, and I’d love to see him show up in, say, the next PlayStation All Stars (if it ever happens) or in a cameo in another indie like Super Meat Boy.

If you’re a Japanophile like me, you’ll find much to enjoy within Within the Blade. You may bang your head against the wall due to its difficulty shuriken-spikes, but that’s not so unexpected in a game like this. Just pause, calm your breath, fade into the shadows, and try again.

Normally this is the spot where we’d link to the official site, but Within the Blade is so indie it doesn’t have one! Instead, enjoy this classic movie clip from 1962’s Shinobi no Mono, aka “Ninja Spy”.