It isn’t summer without the Toronto Outdoor Art Fair (TOAF)! Of course, now for the second year in a row, the fair will take place online – partially. The Fair celebrates its 60th anniversary this year as Canada’s largest and longest-running contemporary outdoor art fair! Over 400 artists will be featured at this year’s edition. If you’re looking to be inspired, to refresh your four walls at home/workspace, or take in a few free public art programming, this is the perfect opportunity! You can find more information about what’s happening in the art scene from talks, tours, performances, installations, live painting demonstrations, family fun and more.

Here are a few artists we have on our radar participating in this year’s TOAF taking place between July 2 to 11 online as well as in person at stackt market.

PETER OWUSU-ANSAH: Graphic Digital Arts. Owusu-Ansah is a particularly captivating artist. Not only does his vibrant works draw your eye in and offer a sense of energy and focus, he is also a Deaf and BIPOC artist originally from Ghana. He started with TOAF’s Art Encounters program that provides support to artists in priority groups. With that acknowledgement he caught the attention of TD Bank’s Group Corporate Art Collection and his work will be included in their permanent collection. He’s also been commissioned by The Gladstone Hotel for original works. His two-dimensional digital artwork explores life in full colour. 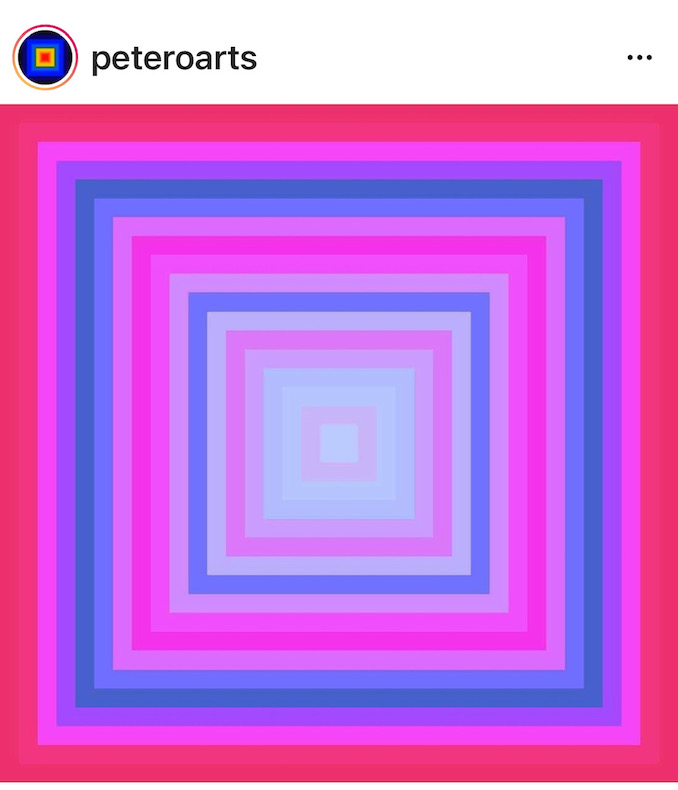 KAL MANSUR: Produces sculpture, painting, and large-scale installations. He completed his BFA from the University of Texas at Austin in 1990. He is represented by galleries in Canada, Europe, and the United States. Mansur manipulates paint, acrylic, and epoxy to create cohesive artworks. The work examines the “ability to conduct how light interacts with surfaces is my attempt to create a visual braille: a language by which colour and composition can be felt and not merely observed.” Mansur’s acrylic sculptures are dimensional objects made of painted plexiglass. Embedded fluorescent pigments project colour through the edges. The work absorbs and reflects light, allowing the viewer to visually travel through the composition. 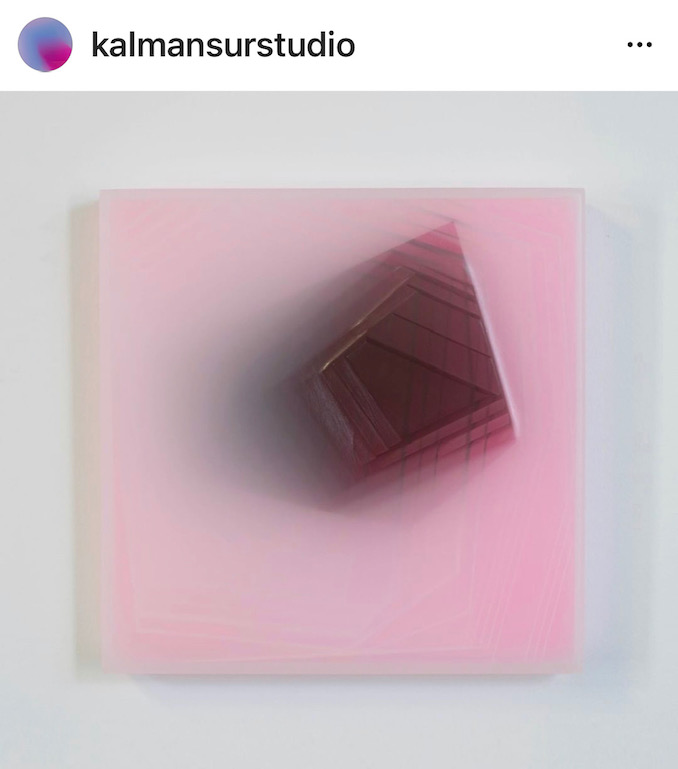 MAUREEN O’CONNOR: Fine art photographer living in Toronto and is a graduate of OCAD.
Maureen is a life-long animal lover and these photographs are produced with the cooperation of local sanctuaries, many of these animals are rescues from fur farms and others are non-releasable wildlife.The animals in these images were brought and photographed onsite to the location in the photograph, several of the locations are homes in Toronto pre-redevelopment.By photographing Canadian animals in abandoned and crumbling domestic architecture, Maureen O’Connor raises questions about how nature and the built environment intersect.She sees these spaces as transformative, evoking memory and showing the beauty and fragility of the animals and the architecture.

HANNAN FAYED: Glass artist working in a unique sculptural style. Her incredible work highlights the diverse possibilities of glass with forms that delicately balance geometry, organic shapes and colour. How the natural forces of erosion transmute a surface and play with the symmetry of a form influences her compositions and carving technique. Fayad wares away the glass with a sandblaster to reveal an intricate structure. Hannan’s work has been exhibited in New York, Seattle, and London England. 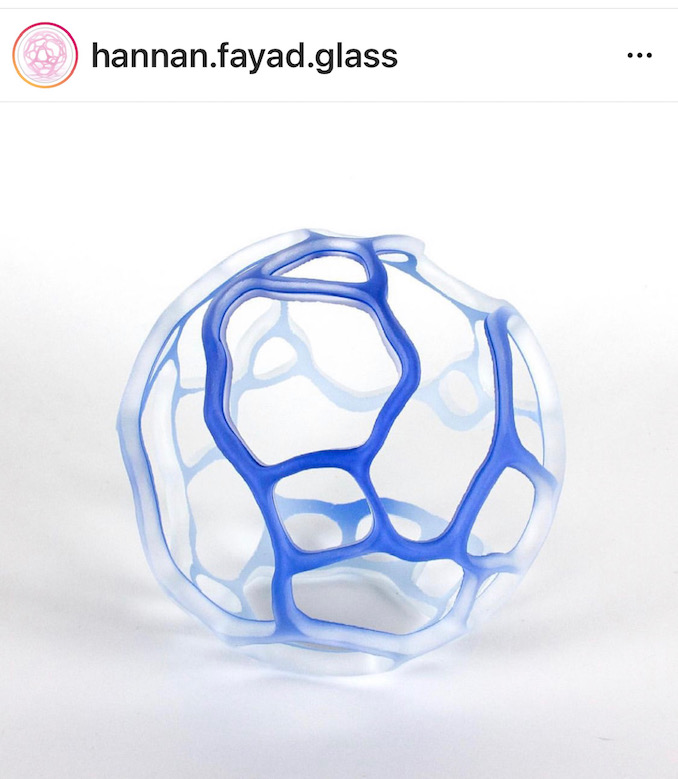 MAUREEN BENNETT: Inspired by The Group of Seven her paintings take on a new and contemporary life. The bold lines creates depth and vibrancy which are offset with simplified forms and solid shapes. She paints from memory inspired by her travels and the emotional experience rather than photographs. “My landscape paintings have a feeling of peace, solitude and quiet.” This year’s collection brings 2 new series titled “The Red Canoe ” where a red canoe is placed in distinctive Canadian landscapes.and “The Whimsical Maritimes Series” which consists of colourful houses and depictions of oceanside life. And she continue to paint her “Algonquin Series”.

ALANNA PETERS: Received her BFA from McMaster University and a BEd for Arts Based Education from Queen’s University. Inspired by the idea of impermanence, Alanna focuses on light and movement and how they distort and interact with the human body. Alanna uses oil paint on wood panels to explore the interaction between the abstract qualities of the environment and the detailed realism of the figure. Often her work incorporates the female form in water as a way of exploring emotions and experiences. Alanna begins the process by sewing the dresses and then taking reference shots underwater before beginning to paint. 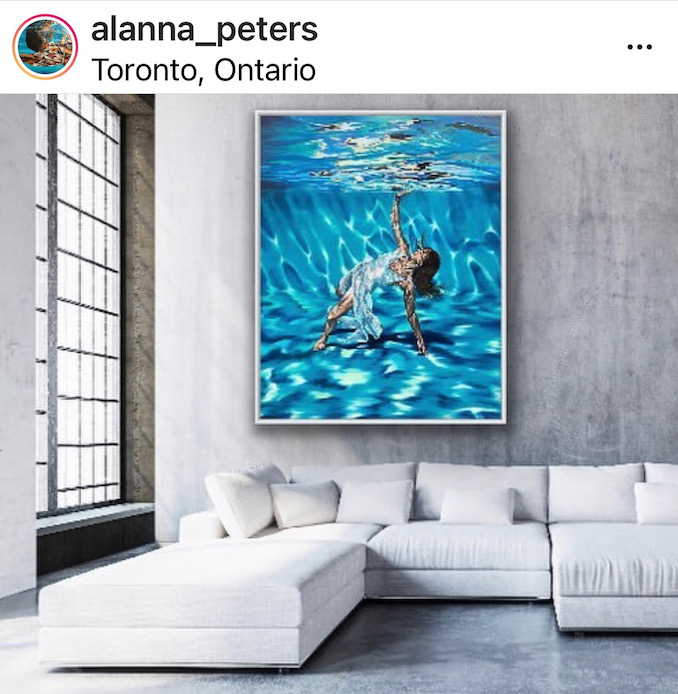 BRENT MCGILLVRAY: creates “ PHOTO REALISTIC” acrylic paintings of vanishing landmarks; roadside restaurants; motels; abandoned buildings and disappearing urban and rural artifacts. This year’s collection’s focus is of Neon Art. “During my travels I capture these striking “fading” neon signs in photographs. I then work back and forth between photography and canvas. In the process I capitalize on my experience as a set designer/art director in the film industry to create meticulously rendered images noticing details such as the way light filters through a window or the play of shadows on a wall.” McGillvray is greatly influenced by the bold and innovative architectural style of Frank Lloyd Wright and Luis Barragan as they blend art and architecture.

JON HOUGHTON: grew up in Thornbury Ontario. He has studied painting and drawing at Mount Allison University, The Aegean Center for Fine Arts, and Ontario College of Art and Design. In 2010 Jon returned to the Georgian Bay area to open a studio/gallery in Collingwood.

DIOGO PINHEIRO: Graduated from OCAD University in 2015 and received a BFA in Drawing and Painting. Second year participating in TOAF and the receiver of the Honorable Mention Award for Painting at the 58th Toronto Outdoor Art Fair. His work consists of urbanscapes that are geometrically simplified and colourful through oil paint on wood panels. Diogo is inspired by artists such as Edward Hopper for his ability to create an urban environment that seems to have been frozen still in time.

KATE LAND: Painting. Born in Toronto and graduated from the Toronto School of Art in 2006 with a Diploma in Fine Arts. She works mainly in acrylic on canvas and has exhibited her paintings in a wide range of venues. Her paintings are often of imperfect storefronts and facades. “As someone with facial differences, I am always thinking about how I face the world. As an artist, I like to represent my own conflicted feelings while celebrating beauty that is not found in a shiny skyscraper, but rather humble family businesses – not often beautiful, but always essential.” BTW she also does commissioned work (people, buildings, animals)

A complete list of this year’s participating artists and schedule of events  can be found at www.torontooutdoor.art

The “Immersive Van Gogh” exhibit is like stepping into a dream, where the brilliance and madness of Vincent Van Gogh’s […]

Today’s daily photo is by photographer Jonathan Castellino. Check out his page for more images. “We all have the intuition […]